Mandela gets closure on 1969 death of eldest son: iLIVE

To honour the memory of Nelson Mandela’s eldest child, Madiba Thembekile who would have turned 67 on 23 February, the Nelson Mandela Centre of Memory is making available a newspaper report on his death. 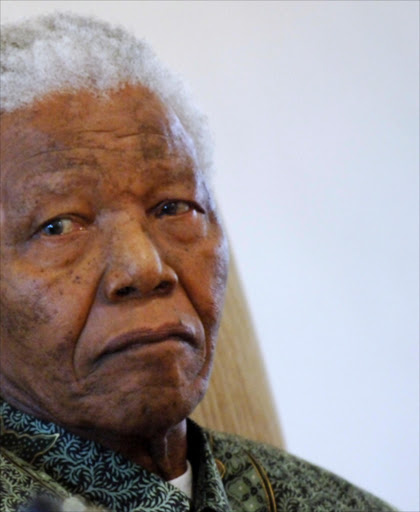 Thembi Mandela was killed in a car accident on 13 July 1969 while his father was in prison on Robben Island. A devastated Mr Mandela was filled with anguish at not being allowed to attend his funeral or to have access to details about the crash.

A recent search, with the assistance of Sipho Rala at the South African Library in Cape Town, unearthed a front-page report in the Cape Argus about the accident. Mr Mandela was only informed of his son’s death by telegram the day after the newspaper appeared.

The article headlined TEN DIE IN W.P. ROAD ACCIDENTS  described “South Africa’s blackest weekend for years” with 25 people killed in road accidents around the country and ten in the Western Cape province.

The report on the accident in which Thembi Mandela died refers to him as “Styles Mandele (35)”. His eldest daughter Ndileka Mandela, who was four years old when her father died, found out recently that her father was nicknamed ‘Styles’ because of his stylish dress sense. He was not 35, but 24 years old, having been born on 23 February 1945.

“We are excited at this discovery, which helps the Nelson Mandela Centre of Memory enormously in piecing together this important strand in Mr Mandela’s story,” said NMCM Memory Head Verne Harris. “The assistance offered to us by other institutions such as the South African National Archives is invaluable,” he said.

“Four people died and four were injured in a three-car collision on the fog-bound Touws River road at 9 am yesterday.

One of the victims was an Italian tourist, a middle-aged man, whose identity is being withheld until the Italian Embassy in Cape Town can trace his relatives.

The other three dead were a white woman Mrs Christina Klaasen (59) of Bloemfontein, an African woman, Miss Irene Similani (35) of Cape Town and Mr Styles Mandele (35) also of Cape Town.

Mrs Klaasen’s husband, Mr Johannes Klaasen (51), was taken to the Eben Donges Hospital in Worcester and later transferred to the Karl Bremer Hospital, Bellville. His condition was described as ‘reasonably satisfactory’.

A Coloured woman, Miss Molly de Jager, who was travelling in the third car with Mr Mandele and Mr [sic] Similani was also injured and was admitted to the Eben Donges Hospital.”

Ndileka Mandela explained to Nelson Mandela Centre of Memory staff that Irene Simelane was Thembi Mandela’s sister-in-law. Molly de Jager was Thembi Mandela’s wife and the mother of his children Ndileka and Nandi. She adopted the surname ‘De Jager’ from a relative as it meant she could be classified ‘Coloured’ and she and her family could live in Retreat, then a coloured area. After her husband’s death she reverted to the name Thoko Mhlanga. After she married Phineas Nkosi she used the name Thoko Nkosi.

Mr Mandela wrote several letters to friends and family detailing his grief and despair over his son’s death and his powerlessness as a prisoner to do anything. He was not allowed to receive newspapers at that time which would have given him more information than he had access to.

His frustration is demonstrated in a letter to Nolusapho Irene Mkwayi dated 19 November 1969.

“I received the tragic news on July 16 when the Commanding Officer showed me a telegram which merely reported the bare fact that Thembi had died in a car accident in Cape Town. Immediately upon receiving this report I made efforts to get detailed and accurate information on the accident.

How did it happen? Did his car capsize or did it collide with another car? Exactly where in Cape Town did the accident occur? How many people were involved? Was death instantaneous or otherwise? Where would he be buried? In Cape Town, Johannesburg or Umtata?

All of these were reasonable questions that every parent would almost instinctively ask. About 10 days later information reached me that the accident had occurred in Touws River and that the funeral would take place in Johannesburg. I also learnt for the first time that apart from Thembi, 2 Europeans had died.

This deepened my anxiety and concern and I wished to engage the services of a Cape Town firm of attorneys to investigate questions of fault and liability and to advise me on any proceedings that might have to be instituted or opposed by his estate.

Four months have elapsed since I received the news of his death and yet up to the moment of writing, I have not been able to get the bulk of the information I require, nor has it been possible for me to contact a lawyer.”

When she was informed of the discovery of the newspaper report Nandi Mandela said:

“I’m surprised about this news article on two accounts: Firstly, that my grandfather was informed of his son’s death only after the article appeared in the newspaper. To make matters worse, he was not allowed to attend his funeral. This is a sad reminder of how cruel the apartheid system was & how they tried at every given opportunity to break the spirit of the political prisoners.”

She added, “The accident as reported in the article is similar to the repeated accounts of how family members described my father’s death. The age was reported incorrectly because my dad was 24 years old when he died.  My aunt Irene, who was married to my uncle (my mom’s brother) also died in the accident.”

“My late mother Molly and the only survivor in the car, was injured in the accident. She was admitted in hospital and she was very upset that everyone came to the hospital to see her, yet my dad ‘was the only one who did not come’. Family members were still figuring out how to break the news of my father’s death. Eventually, they had to tell her because the funeral arrangements had to be made,” Nandi said.

Some of these are: my sister remembers how he liked dressing her in cowboy clothes; My aunt Makaziwe and my late uncle Makgatho remember how he took care of them when their father was in jail; Aunt Sheila (Sisulu), always reminds me how much of a spitting image I am of my father.

Uncle Matoto, a friend of my father remembers how they used to love listening to jazz together; my late maternal grand-mother, Lilian de Jager remembered how he used to like dressing up. She also recalls how she refused to let my parents take me along on that fatal trip.

Nandi continued: “My late paternal grandmother Evelyn Mandela had this affectionate, distant and sad look every time she talked about him. She loved recalling, and laughing as she told the stories, how he used to dress my sister, Ndileka in cowboy clothes and how he used to say “what a beautiful child I was, because I looked like him”. My late mother also remembered how he liked to dress up and how he used to be moody and not talk to anyone all day.”

“I only know him through the eyes of my family. These endearing memories give me a glimpse of a father I would have liked to know,” she said.

Echoing her comments, her sister Ndileka said, “Dad and I were born a day apart. I was born on the 22nd February and will be turning 47 and he would have been 67. I know that we would have had a lot in common. I sometimes sit and wonder how my life, my sister’s and indeed our entire family’s life would be had he lived.”

“Whenever I ask Granddad about Dad I always see the pain that is still etched in his eyes. He always has this faraway look a person has when they reminisce and he says very little save to say that Thembi was a very responsible young man,” she said.

“One can see how the apartheid system, did irreparable pain by denying him the basic human right of saying farewell and paying last respects to one’s dearly departed. The pain of not being able to bury his first-born son will never be erased,” Ndileka said.