Happiness a way of life 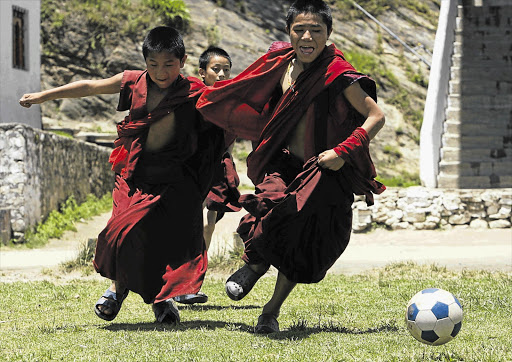 Monks play football at a monastery in Bhutan. In 2002, the Himalayan nation and Montserrat, the bottom teams in the Fifa rankings, played an alternative final to the world cup. Bhutan won

Monks play football at a monastery in Bhutan. In 2002, the Himalayan nation and Montserrat, the bottom teams in the Fifa rankings, played an alternative final to the world cup. Bhutan won

Featured in the book,Utterubbish: A Collection of UseLess Ideas - a fascinating collection of ideas, works and exhibitions by more than 30 international designers and creators - was Dutch filmmaker Johan Kramer.

Kramer, a huge soccer fan, was bitterly disappointed when his country, The Netherlands, failed to qualify for the 2002 World Cup.

Carlo Garganese wrote of the team on Goal.com: "Despite possessing a host of world-class players in their ranks - such as Edgar Davids, Clarence Seedorf, Ruud van Nistelrooy, Marc Overmars and Jaap Stam - Louis van Gaal's Oranje finished third in their qualifying group behind Portugal and Ireland, losing to the latter 1-0 in a decisive clash in Dublin."

Forced to ponder (for the first time, I'm sure) that which we call "failure", Kramer thought: What if there were a tournament for the lowest-ranking teams in the Fifa standings (not that Oranje would qualify)?

What if they could stage a final for the lowest-ranking teams?

If the two teams at the bottom of the Fifa rankings were pitted against each other, would the game be as scintillating as the Samba boys battling for glory against the Germans?

Kramer and his partner, Matthijs de Jongh, got to work.

Looking at the Fifa world rankings, there was Bhutan at number 202. Bhutan - a forest-rich country in the Himalayas with a population of about 810000 - is not too crazy about soccer. The national sport is archery.

But hey, this was not about Bhutan, it was about a Dutchman's ingenuity - and his love for the beautiful game.

At the number 203 spot was Montserrat, a British territory nicknamed the Emerald Isle of the Caribbean, where reggae and cricket are king - and volcanic eruptions are the order of the day.

But, hey, this was not about Montserrat. It was about The Netherlands' failure to qualify for the biggest soccer tournament in the world.

Anyway, with the two contenders for the bottom spot, Kramer and his team began work on what would become the fascinating documentary The Other Final.

On the day that Germany played Brazil in the final of the 2002 World Cup in Japan, Bhutan and Montserrat were in the Bhutanese capital, Thimphu, competing in an official Fifa-sanctioned game.

Bhutan won 4-0. And if you check the Fifa standings now, the Bhutanese have maintained their superiority over their 2002 "other world cup" rivals.

South Africa could learn a thing or two from this predominately Buddhist country, whose population comprises mainly subsistence farmers.

Bhutan is the only country that puts happiness at the centre of public policy. The lawmakers consider how a particular policy will affect the wellbeing of the nation, not only its gross domestic product.

If we were in Bhutan, e-tolls would never have been given the time of day. They would have been too depressing a thought to entertain.

Bhutan was the last country to introduce television, in 1999, but hey, who wants to watch TV when one's happiness is the responsibility of the state?

It is said that when Jigme Singye Wangchuck was crowned King of Bhutan in 1972 he declared that he was more interested in gross domestic happiness than gross domestic product.

The four pillars of GDH are economic self-reliance, a pristine environment, the preservation and promotion of culture, and good governance in the form of democracy.

How happy are we in South Africa?

You only need to look at the news to get a measure of our gross domestic happiness: riots, demonstrations, strikes, unemployment, lack of housing, the petrol price, Woolies' slipping quality standards, Lauryn Hill's performance at the Cape Town jazz festival.

Oh, we are such an unhappy nation.