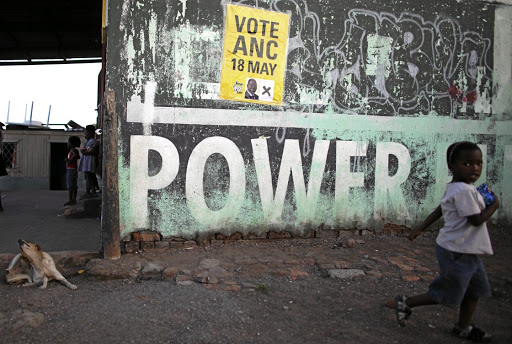 NEXUS: A young girl walks past an ANC election poster on a spaza shop in Florence Street, in Duncan Village, Eastern Cape. The area is home to the very poor. Recent fires destroyed shacks just metres from the shop.
Image: ALAN EASON/DAILY DISPATCH

Everything is connected. When Public Protector Busisiwe Mkhwebane demands the constitution be amended to change the mandate of the Reserve Bank — a request that is neither her place nor within her ambit — it is part of a bigger ploy and cannot bedivorced from other developments in our young democracy.

It is a bit like the mineral resources minister - or shall I address him by his proper and correct title, which is Minister of Gupta Family Affairs - and his new mining charter, for example.

The fact that this charter gives the Gupta family the BEE beneficiaries tells you everything you need to know about what is going on here.

We shouldn't be surprised. Mosebenzi Zwane was appointed by the Guptas, as we know from the leaked e-mails.

What are the connections? What is clear, and what South Africans are failing to understand, is that nothing that happens in the top echelons of our politics now is chance. A ruthless, cynical and dangerous plan is unfolding.

Sadly for all of us, Mkhwebane is a minor but key cog in this nexus. First, her call for the clipping of the Reserve Bank's powers and changing its mandate sounds  very familiar.

Remember when Des van Rooyen was briefly appointed finance minister in December 2015? He said he wanted a national Treasury that benefited all and "not only a few".

For seven days before his appointment he visited the Gupta family compound to take lessons on what to say and do.

How is this connected to Mkhwebane and the Guptas and their lackey, Jacob Zuma? First, the wording mirrors exactly what Van Rooyen said. Second, there is a direct link to the Guptas. The Mail & Guardian reported last week that Mkhwebane's views on the Reserve Bank were influenced by two meetings.

"One was with the department of state security," the paper wrote. "The other was with Stephen Goodson, a former Reserve Bank director, Holocaust denier and collaborator with the Gupta-linked Black First Land First group."

BLF only ever appears in public to defend the Guptas and to attack Absa, which is led by Maria Ramos. When Mkhwebane had concluded her report she did not send it to complainants and many others mentioned in it. She sent it, says the M&G, to BLF convener Andile Mngxitama - a vociferous defender of the Guptas.

What is going on here? Mkhwebane's actions are part of the "radical economic transformation" narrative and her actions point to nothing but a Gupta-influenced agenda to break South Africa's banks.

The Guptas have for two years now faced a barrage of scrutiny from our banks which do not want to break the law.

What has followed is a push- back that has taken on a sinister, dangerous and potentially murderous tone. Journalists have been followed, photographed, snooped upon and intimidated by people with clear links to the Gupta family. Now we learn that banking leaders from Ramos to Laurie Dippenaar have also been under surveillance.

Extraordinarily, nothing happens to these people. Nothing.

There are two states in South Africa. One of them is the one you and I think we live under, one where we believe there are rules and regulations. The other is a shadow state run by Zuma and his criminal enterprise, where people hide their thievery under terms such as "radical economic transformation".

"There are some people who are satisfied by eating crumbs at the table of the Guptas and they think that is [radical] economic transformation, and that must stop now comrades," he said.

"Our policy conference must not be used to mislead our people."

Sadly though, the likes of Motshekga and others are arriving very late to this debate. Their beloved ANC has already been stolen. The policy conference that starts on Friday has all the hallmarks of a gathering of Zumarites. Populist policy will rule the day. Zwane, Van Rooyen and others in the pockets of the Guptas will be treated like royalty.

Everything is connected and the dots do not lead to what the ANC promised in the 1990s: "A Better Life For All."

The dots, when they are connected, point to an unfolding plan to enrich the Guptas, Zuma and their cronies and to do everything in their power to ensure they never see the inside of a prison.

To achieve this they are prepared to do absolutely everything, including breaking every law in the book. And we are sitting there, watching.