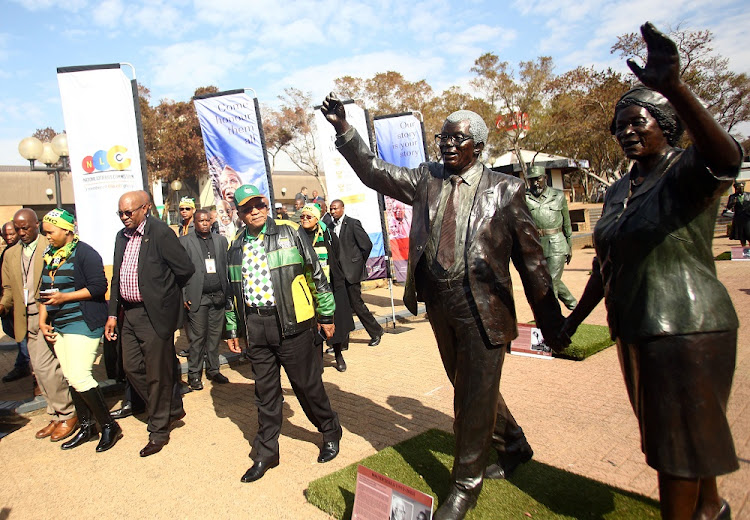 ANC President, Jacob Zuma looks at the lifesize statue of Walter Sisulu and Albertina Sisulu during his walkabout at the ANC Policy Conference held at Nasrec.
Image: Masi Losi

Let this sink in: South Africa, you are on your own. The ANC, once a proud, clear-eyed and capable organisation, cannot come up with the solutions South Africa needs to get itself out of the massive problems we face.

The battle to build a prosperous, united and nonracial South Africa cannot be won by the ANC.

It is up to South Africans to do it. Many of the people who were at the ANC’s national policy conference last week will tell you what a disaster it was. The party — faced with a 27.7% unemployment rate, a junk credit rating, a recession, racial polarisation, increasing protests and, crucially, a corrupt and incompetent president in thrall to the Gupta family — emerged after six days of talks without a single coherent policy to revive the economy.

Neither was there a coherent programme on any other issue, except a nonsensical call for the nationalisation of the Reserve Bank. Despite this gargantuan failure, even the “good guy” in this ANC firefight, Cyril Ramaphosa, continued to delude himself. The deputy president told a gala dinner on Friday evening that the ANC has emerged from its recent national policy conference with renewed vigour and a clear message that it is now time to get back to work and attend to the business of building a nonracial‚ nonsexist‚ just and prosperous society.

One imagines that Ramaphosa has to say all these things even if he does not believe them. He is, after all, locked into the ANC’s mode of campaigning, which is to criticise without seeming to criticise, and to defend the party while making only sly references to the corruption of its leader and his divided cabinet.

But if you think that what transpired at the ANC policy conference — the lack of clear policy, the race-baiting of the likes of Pravin Gordhan and Derek Hanekom, the attempts to humiliate serious thinkers such as Joel Netshitenzhe — is depressing, then consider what the party did immediately afterwards. ANC chief whip Jackson Mthembu announced on Friday that he wants the party to take action against ANC MP Makhosi Khoza. Khoza’s transgression?

She has written to National Assembly Speaker Baleka Mbete asking for MPs to be allowed to vote with their conscience on a motion of no confidence in President Jacob Zuma scheduled for August 8. How does one begin to even understand what’s going on here? Zuma has been asked by the ANC’s integrity commission, made up of the party’s great and good, to step down for his many peccadilloes and indiscretions. He has been found by the Constitutional Court to have failed to uphold and defend his oath of office.

His friend Schabir Shaik was convicted and jailed for bribing him. He is dodging the law on 783 counts of fraud, corruption and racketeering. He has slept with a friend’s daughter, who claimed she raped him. He sleeps soundly in a R246-million house built fraudulently for him by taxpayers.

I have not even started on his shocking relationship with the dodgy Gupta family. That is a five - volume book on its own. The ANC is choosing to charge Khoza, by the way, not for standing up against this man but for choosing to follow what the Constitutional Court has already ruled on.

The court said: “Members are required to swear or affirm faithfulness to the republic and obedience to the constitution and laws. Nowhere does the supreme law provide for them to swear allegiance to their political parties, important players though they are in our constitutional scheme.” I am a firm believer in political parties. I believe that they have rights — such as to take firm positions on certain issues — and to enforce those rights among members.

They also have responsibilities. The ANC has been irresponsible for 10 years now through its failure to rein in and discipline Jacob Zuma, a man who has sold his organisation and the country to the Gupta family to such an extent that they choose cabinet ministers and run much of the country. Those still with a backbone — the Khozas, Gordhans, Mcebisi Jonases of the world — are doing their best to hold Zuma to account.

But they are being mauled in the ANC. And the few, such as Mthembu, who have spoken out in the past, went on to aid and abet Zuma by being his bull terrier when the likes of Khoza spoke up. They say evil happens when the good stay silent. Evil flourishes when the few good men and women, such as Mthembu and even Sports Minister Fikile Mbalula, aid and abet a horrendously inadequate and destructive force like Zuma.

It is telling that over the past year — when the ANC Youth League in KwaZulu-Natal published Khoza’s address and details on social media and threatened her — the police neither offered her bodyguards nor any other kind of security. We are here now. We are on our own. The ANC, once a force for good, is a gang that works merely to protect its leader, Zuma. The solutions to South Africa’s problems will not come from the ANC. The party will not and cannot “self-correct”. It is on its way to implosion. The solutions must come from civil society.