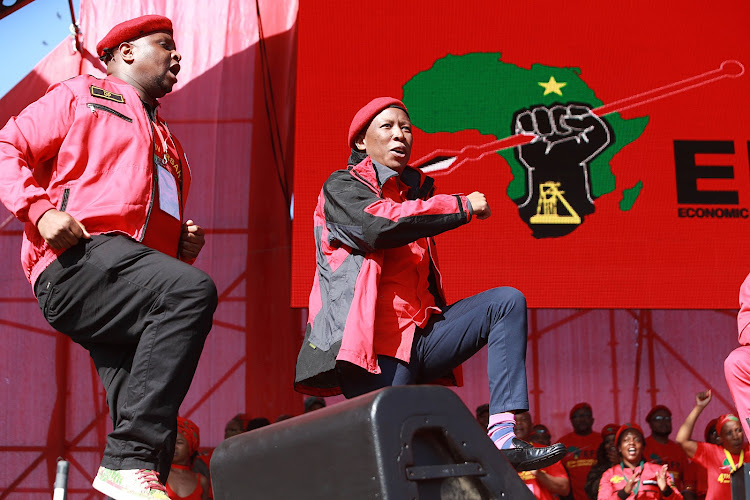 From racial tensions to the land issue‚ to dealing with lazy municipal councillors to ownership of the media‚ and even the content of local rap songs‚ the Economic Freedom Fighters leader was in full cry at his party’s fourth anniversary celebrations in Durban on Saturday.

His comments on next week’s motion of no confidence in President Jacob Zuma must have rattled the cages of his former comrades in the ANC.

Malema said if Speaker Baleka Mbete accedes to a secret ballot‚ the motion of no confidence would get sufficient support from ANC MPs to vote Zuma out of power. He claimed he had spoken to over 60 ANC MPs‚ including people in cabinet‚ who indicated that they would support the opposition’s motion if they were allowed to vote in secret.

“I’m telling you‚ on the 9th of August‚ South Africa will have a new president‚” Malema told his supporters.

This should cause further consternation amongst the ANC leadership‚ which has threatened and tried to strong-arm its MPs to oppose the motion. The ANC’s KwaZulu-Natal province has instituted disciplinary action against MP Makhosi Khoza for her outspoken views about Zuma.

While Mbete would ironically take over the reins should Zuma be voted out‚ she is worried about the consequences of allowing the secret ballot on her floundering presidential campaign. Because of the turbulence that would ensue if Zuma is toppled‚ Mbete is worried there would be a backlash against her in ANC ranks.

Mbete has asked for time to consider the matter. There would no doubt have been efforts to persuade her against the secret ballot during the weekend’s ANC national executive committee lekgotla.

Malema made it clear that should Mbete not permit the secret ballot‚ they would drag her back to court.

“Indians who are owning shops don’t pay our people. They pay them with food parcels. Our people must be paid minimum wage‚” Malema said. “If we can tell whites the truth we must also tell them.”

He said Indian business people in KZN were the dominant recipients of government contracts‚ and he urged them to share their wealth.

“If you’re an Indian and you don’t mistreat black people‚ don’t worry. But if the shoe fits‚ wear it!”

Malema said he did not consider all white people to be the enemy.

“We are not coming for whites‚ we are coming for racists‚” Malema said. He also lashed out at private schools for being racist and being “obsessed with our hair”.

He also said there should be more black ownership in the South African media.

Although the EFF leader is facing charges in two provinces for his controversial comments promoting land grabs‚ he repeated the party’s policy that vacant land should be occupied. He said the EFF had tried to lobby for a constitutional change to allow land redistribution without compensation but the ANC had rejected this. He said the ANC was however trying to claim this as their policy.

Malema also sought to distinguish himself from the ANC by being tough on people in his own ranks. He threatened to fire “lazy” EFF municipal councillors.

“If you are earning a living in the name of the EFF‚ you must work hard and perform beyond expectation‚” he said.

“Every black person is oppressed. This includes Oprah Winfrey and Beyoncé.”

And while celebrating the achievements of people like Trevor Noah‚ Caster Semenya and Wayde Niekerk‚ he had a complaint about the country’s rap artists.

The leader of South Africa’s third biggest political party is somewhat of an artist himself when it comes to shoving people out of their comfort zones.