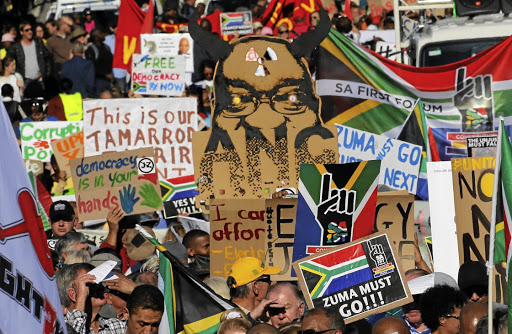 The story of South Africa simply refuses to be predictable.

Today, members of the National Assembly will for the first time cast a vote by secret ballot on a motion of no confidence in a sitting president.

After years of being the ultimate Teflon Man, President Jacob Zuma, for the first time, faces a real threat of being toppled.

Speaker of the National Assembly Baleka Mbete did what had been, until now, unthinkable for a top-six official in the ANC: she rolled the dice on Zuma's fate.

By allowing MPs to vote by secret ballot in the no-confidence debate the ANC does not have complete control of the outcome.

ANC members who vote against Zuma will be swiftly dealt with, warns Khoza

ANC MP Makhosi Khoza has warned that party members for vote against Number One will face severe consequences - but says it will be worth it.
Politics
4 years ago

It simply has to trust that the instructions it will no doubt hammer into its caucus ahead of the vote will be enough to prevent its MPs from breaking ranks.

But once they walk into the National Assembly this afternoon, it will be their decision and their conscience that will dictate how they vote - with no danger of penalty.

Mbete provided a detailed explanation for her decision at a media briefing yesterday afternoon, quoting at length from the June Constitutional Court judgment that she had the discretion to decide on the voting method.

By delaying the announcement until the eleventh hour, it was expected that she would opt for the open ballot and was trying to narrow the time available for an urgent court challenge by opposition parties.

But Mbete stunned the country when she said she had taken "due and impartial consideration of all the factors" and decided that voting on the motion would be by secret ballot.

It was significant also that she mentioned that a secret ballot became necessary when "circumstances are toxic" - in reference to the threats and bullying directed at ANC MPs who indicated that they would vote according to conscience.

Mbete's decision and her justification also show that she is concerned about her own political fate and remains in contention for a top position in the ANC's national elective conference - without Zuma's help.

Even with the secret ballot, the numbers still weigh in favour of Zuma remaining president, but the number of people who vote in support of the motion will reveal his support within the ANC.

The motion requires a simple majority, at least 201 members, in favour to succeed.

In the 400-member National Assembly opposition parties hold 151 seats. Assuming there is full attendance, 50 ANC members would have to vote to support the motion tabled by DA leader Mmusi Maimane for it to succeed.

IN FULL: Speaker of the National Assembly Baleka Mbete provides her reasons for allowing a secret ballot during the Motion of No Confidence debate in ...
Politics
4 years ago

Although there is a three-line whip in force for the debate, there could be absentees due to illness or overseas travel, and two ANC MPs have died, which could affect the outcome.

For those ANC MPs worried about supporting an opposition motion, they now have the option to abstain - meaning that the ruling party will not have the absolute majority in support of Zuma as in previous cases.

So far, four ANC MPs have made it absolutely clear that they would vote according to conscience, not the ANC line. They are Makhosi Khoza, Mondli Gungubele, Pravin Gordhan and Derek Hanekom.

Therefore, any number higher than 155 votes in support of the motion means that ANC MPs have defied their party.

Zuma might or might not survive but, based on Mbete's decision and depending on the number of ANC MPs who vote according to conscience, it is clear that more and more people are no longer prepared to throw themselves under the bus to save him.