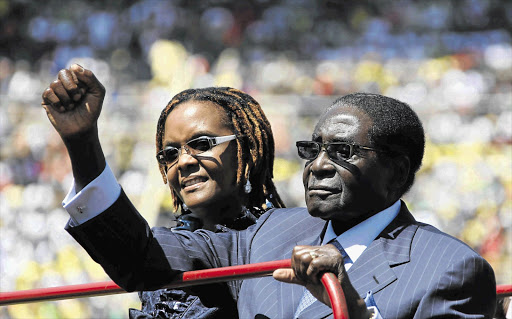 Like it or not, Zimbabwe's thuggish first lady Grace Mugabe will walk scot-free from her troubles in South Africa.

It will not be because of ineptitude from our authorities but because South Africa will have no option but to do nothing, thanks to international law.

Mugabe wrote her own ticket to impunity back in 2009 when she beat up a press photographer in public in an incident during a Hong Kong shopping trip which was captured by security cameras.

And as much as this might stick in our craw, South Africa is most likely going to have to let her walk.

South African police have put a "red alert" on the country's borders to prevent any attempted flight by Zimbabwean first lady Grace Mugabe, who is ...
News
4 years ago

Academic Justin Papka published a detailed study of the Mugabe Hong Kong incident in the journal of the Brussels School of International Studies. He argued that the inviolable immunity extended by governments to heads of state also extends to their spouses.

"For this reason, rather uncouth circumstances such as Mrs Mugabe's are typically tolerated by nations in the interests of sustaining positive and efficient relations," he argued.

"The application of head of state immunities to family members is a practice that is bolstered by international customary law, rationality, and the desire for effective mutual relations between sovereign states on a diplomatic level and within a strategic context ..."

This leaves Mugabe's alleged victim Gabriella Engels, a citizen who is promised protection by the South African state, high and dry and betrayed.

In reality, while she is first lady, Grace Mugabe can do whatever she likes here. She could even walk into this newsroom and punch the editor of The Times on the nose.