Our callow president is in the process of destroying the party 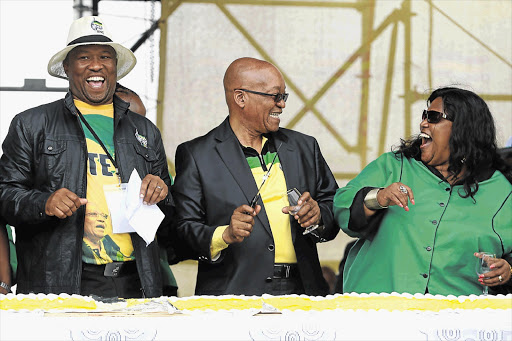 On March 12 President Jacob Zuma showed his comrades on the national executive committee of the ANC the finger - and they did nothing about it.

Their lack of action then and in the past 10 years of his many transgressions has come back to bite them as Zuma and his faction of the party run amok and destroy their 105-year-old organisation.

The ANC's chaotic Eastern Cape provincial conference this weekend was a boost for Deputy President Cyril Ramaphosa's bid to become the party's next ...
Politics
3 years ago

Despite these warnings, verbally and in writing, Lungisa stood for and won the ANC's Nelson Mandela Bay region's chairmanship. He broke his party's own rules.

Zuma, the custodian of the ANC's constitution, knew the rule very well. He was present when it was adopted in Mangaung in December 2012.

Yet, on the afternoon of March 12, Zuma hurriedly boarded a chartered plane in Pretoria and rushed to Nelson Mandela Bay just hours after Lungisa was elected. He did not come to reprimand the man for breaking the rules. He came to praise him.

Zuma told Lungisa and delegates to the conference that the ancestors agreed with his election and the will of the people should be respected. Zuma said the majority had spoken and "ours is to take that decision and make it ours".

The ANC's other top-five leaders later kicked Lungisa out of the position, but they never reprimanded Zuma.

Well, Zuma and his faction are at it again. This weekend Lungisa and pro-Zuma ANC members repeatedly disrupted proceedings at the party's Eastern Cape conference. After three days with no visible movement towards discussion of policy or election of leadership, fights over delegates' credentials erupted. By Sunday morning eight were injured, stun grenades had been used and the conference had descended into a shambles.

The pro-Zuma faction had collapsed the conference to ensure a new leadership that supports the ascension to presidency of Cyril Ramaphosa would not see the light of day.

Meanwhile, in KwaZulu Natal, where the pro-Zuma provincial executive has been declared unlawful by the courts, Zuma has been fighting tooth and nail to ensure this illegitimate leadership stays in power. As the Sunday Times reported yesterday, he went so far as to go behind his comrades' backs and seek his own legal opinion to ensure the pro-Zuma leadership stayed in place in KwaZulu-Natal.

These are desperate days. Zuma is hellbent on staying in power and both he and his faction are prepared to destroy the ANC to do so. The man wants to continue the looting he has initiated alongside his cronies the Guptas. The violence at the Eastern Cape conference is evidence enough of what he is capable of, but just watch as the same happens in the Free State and North West.

There are no saints in this extremely dirty war that's unfolding within the ANC.
Ideas
3 years ago

This is now Zuma's aim: The collapse of these provincial structures will ensure a national conference of the ANC will not be held in December and the Zuma leadership will stay in power. A man who should not have smelt the ANC leadership in the first place, and who has brought nothing but scandal and shame to the office, will continue through to 2018 and perhaps beyond.

ANC leaders such as Ramaphosa, Mantashe and Zweli Mkhize need to wake up and smell the coffee. It is now becoming clearer by the day they will not have a party after Zuma. He is destroying the ANC before their very eyes. Either they deal with him now, or they will go down with the burning plane he has forced them onto.

That, of course, will not happen. This is a straight scenario and there is only one outcome. The ANC will now surely split as Zuma defiles the organisation through proxies like Lungisa. A coalition of the opposition will soon run South Africa, with a disoriented, shocked and surprised ANC a shadow of its former self.

Historians will record that a great movement was brought down by a callow and corrupt man named Jacob Zuma - and his comrades allowed him to do so.