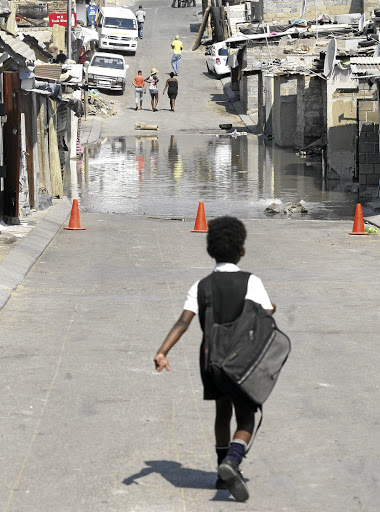 Riley Jacobs* is more anxious than he is angry. Eleven schools in Cape Town's suburbs rejected his Grade R son's application for entrance into Grade 1 in 2018. The father's e-mail to me was moving: "PLEASE could you assist us in getting our son into a good school next year. PLEASE."

Riley's problem: the catchment area. The Jacobs family lives in a township surrounded by low-quality and seriously dysfunctional schools. If the little boy gets stuck in those schools, the Jacobs family and every other resident of his neighbourhood knows, the child has no future.

I would prefer the language of catchment areas to refer to rainfall rather than residents. The word itself fills poor parents with despair. With the wave of a cold, bureaucratic hand, the desperate parent is dismissed with these words: you are not from this catchment area.

Then the anger. Riley tells me how his family was uprooted from these very areas where there are some of the best schools in South Africa, along the long main road from Kenilworth and Claremont through Rondebosch and Rosebank. There is a harsh injustice here, reckons Riley. First they uproot me and then they tell me I'm not from there.

It is time to rethink this efficient tool for the exclusion of the poor from top-quality schools, the catchment area. To be sure, there are now black children in these middle-class and wealthy schools. But most of them are the children of well-placed politicians and wealthy businessmen and women, the kind with posh accents who come to dominate protest movements at the elite universities in part through guilt as they ponder those who look like them but were left behind in rural and township schools.

As one prominent student leader told me: "They [elite black students] speak about what they have never experienced."

Nobel prizes awarded while Mzansi debates the decolonisation of science

The truth is that a talented poor child will not escape poverty and give the family a break from their predictable lives of struggle and survival unless she or he has the opportunity to access a top school with competent teachers and predictable timetables. Yes, I know, the scale of the problem makes this an impractical solution for the vast majority of poor children. I have argued through these pages that the sustainable solution is to transform all our schools into high-quality institutions for teaching and learning. I know that.

But what do we do with Riley's son? The school system will not be transformed in the near future; in fact, it might stay in this state of stasis for decades to come. In the meantime, the child starts school next year. If he misses this opportunity in the 12-year cycle, the little boy is as good as buried, educationally speaking.

The school system is not there simply to reproduce the class and race privileges of the elite. If that were the case, I and many others would not be in this profession. So here's an idea. How about every middle-class, former white school is required as a matter of policy to take into their Grade 1 (primary school beginners) or Grade 8 (start of high school) classes 25% of talented but poor pupils who are stuck, or likely to be stuck, in township or rural schools?

The wealthy kids will have other options but this means at least a quarter of places are reserved for the poor with the simple motivation being to break the cycle of poverty for these families.

It took me two weeks to prepare an hour-long lesson on the subject of refraction for Grade 8 science pupils in a rural township school outside ...
Ideas
3 years ago

It is time for bold action. Your school, for many South Africans, is your destiny. That is patently unfair for those children who, through no fault of their own, are stuck in an education cul-de-sac.

Yet I have absolutely no doubt that many (certainly not all) middle-class parents will receive such a policy proposal with outrage. When we have a real chance to chip away at inequalities in our society through concrete actions, self-interest makes its appearance in ugly ways. It is, after all, about my child first.

There will no doubt be some ridiculous arguments in defence of the status quo, such
as the one that standards will suffer when

poor black children are granted access. What nonsense. Every child, given a fair and equal opportunity, will rise to the occasion regardless of class, race, gender or religion. That is an educational fact and the "defence of standards" argument should be treated with contempt.

In the meantime, what do I tell Riley Jacobs?