Why South Africans and the world do not believe Gigaba 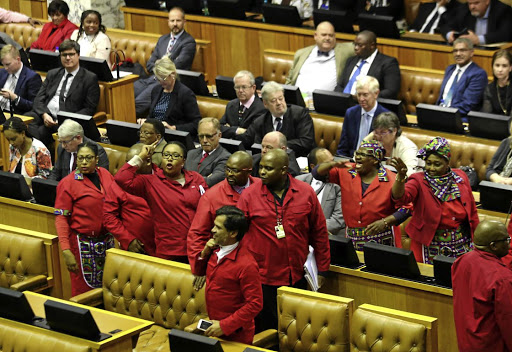 Last Wednesday the EFF once again protested loudly and walked out of parliament. They said that Malusi Gigaba, President Jacob Zuma's finance minister, had no right to address parliament.

EFF deputy president Floyd Shivambu was forthright: "South Africa is in crisis because of Mr Gigaba, who handed over state-owned companies to the Guptas. And we are collaborating in crime if we allow him to address this parliament about money."

The EFF did not receive much media attention for its stance, but for what it is worth I want to hug and kiss the members for what they did. The EFF protest underlines a simple truth: those who invented, enabled, implemented and benefited hugely from state capture must not think we are all unaware of their past actions. The EFF knows what Gigaba has done to this economy and the party won't shut up about it. We should all be like the EFF.

When he finally took to the podium to deliver his first medium-term Budget policy statement speech, Gigaba said: "It is not in the public interest, nor is it in the interest of government, to sugar-coat the state of our economy and the challenges we are facing."

We must also not lie about what has brought us to the dire state we are in today.

So why are we here? Why didn't South Africans and the world believe Gigaba when he finally spoke? Shivambu said Gigaba "handed state-owned companies to the Guptas". Is he right?

Think back to just two weeks ago in parliament when former Eskom CEO Brian Dames said he was asked by Gigaba's then legal adviser at the ministry of public enterprises, Siyabonga Mahlangu, to "see some people".

This was way back in 2012. He believes one of the individuals was one of the Gupta brothers. He said the discussion had included a request for a coal contract at a power station that did not require more coal.

Go back to March 2013 when the Sunday Times published a story saying fired South African Airways CEO Vuyisile Kona was invited to a meeting at the Guptas' Saxonwold, Johannesburg, home on October 29 2012 by the very same Mahlangu - describing him as "special counsel and adviser" to Gigaba. Also present at the 40-minute meeting were President Jacob Zuma's son Duduzane Zuma and Tshepiso Magashule, a son of Free State Premier Ace Magashule.

The newspaper wrote: "Upon arrival at the meeting, Mahlangu introduced Kona to 'our brother', Tony Gupta.

"Then Gupta allegedly told him they were 'brothers', that 'times were tough' and there was R100,000 available for him. Kona asked what this was for and told Gupta that he did not need the money. Gupta allegedly upped the offer to R500,000. Kona had asked Gupta what the money was for, said 'no' and left."

Every crook needs a bagman - the person who does the dirty work, collects the bribes. Zuma's bagman is apparently his son Duduzane. In Gigaba's case he needs to tell us whether Mahlangu was his bagman or not. He has not taken us into his confidence. Instead, he wants us to go on as if he is a credible minister of finance.

In the case of Eskom, for example, Gigaba told journalists on Wednesday: "I don't think we will be able to bail Eskom out if anything went wrong. That is why I am saying that the appointment of a new board is an absolute, urgent necessity."

This from the man on whose watch credible boards at SAA and Eskom were destabilized, undermined and then disposed of, paving the way to later install the likes of the disastrous Ben Ngubane at Eskom and Dudu Myeni at SAA. This from the man who is in the middle of destabilising the board of the "crown jewel", the Public Investment Corporation.

The EFF did us all a favour on Wednesday. It reminded us that we are in the mess we are in because of people like Gigaba and that, crucially, they have failed to speak clearly and truthfully to South Africans about what they did for Jacob Zuma's criminal enterprise. The EFF does not have a short memory. Neither should we.

Those who believe the ANC can self-correct are deluded

South Africa's party of liberation, the ANC, is now well and truly on the path to oblivion. It cannot save itself. Last week's shambolic cabinet ...
Ideas
3 years ago

Despite the utterances of the Mineral Resources minister, the succession battle in the ANC is far from decided
Ideas
3 years ago