Even in death, South Africans are racially divided 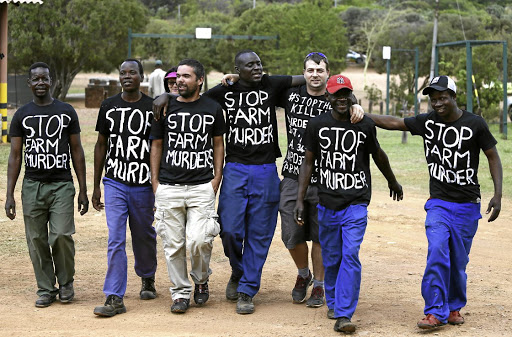 UNITED THEY STAND A handful of black people joined families of murdered farmers during their gathering at the Voortrekker Monument in Pretoria in support of #BlackMondayPicture: Phill Magakoe

I read Afrikaans and English newspapers. You might as well be reading about two different countries when it comes to death.

In the past few weeks the Afrikaans papers have led with horrific stories of farm deaths including hours of torture and cruelty. Such reports are accompanied by graphic images of death and wrenching photos of weeping relatives. They are heartbreaking, these images of farming families slaughtered on their properties.

Then comes the politics.

Rightwing groups mobilise to present these tragic deaths as an assault on the white race. Local and international websites peddle a narrative of black revenge on white bodies. These blacks don't just kill, they martel (torture) their victims to make a point.

To ordinary white citizens reading these almost daily accounts of farm murders in Afrikaans newspapers, it certainly feels as if these brutal killings are about them. The protests this week made this point as a T-shirt carried the message "100% Boer" and an appeal was made to marchers to leave their old South African flags at home. Some brought the hated flag anyway.

On Monday‚ as it emerged that a few Black Monday protestors had waved old South African flags‚ I posted a fairly uncontroversial opinion on Facebook.
Ideas
3 years ago

On Facebook I posed the question: Why do South Africans, other than white Afrikaans readers, not seem to care about these farm murders?

In response, opinion from some black quarters was brutal and heartless. Who are the farmers, white or black? Why farmers - what about all murdered people (34.2 per 100,000 according to the latest SAPS statistics), the majority of whom are black?

Perhaps, says a strident white Facebook friend, but it is the proportions that count - anywhere from 97 to 133 farmers (depending on your source) are killed for every 100,000 farmers. Fact checkers put the number closer to 3.2 farm murders per 100,000. The truth is, as Mohammed Jameel Abdullah argues in the Mail & Guardian, we do not have recent and accurate numbers on farmers and murders, in part because of poor definitions of what a farmer is.

For example, there is little distinction in the numbers between murders on farms and farmer murders, says Abdullah. But, with proportions, you can choose any demographic and make compelling arguments for your political cause - like the proportion of black people killed (race) or women murdered (gender) or poor people slain (class).

The truth is, that even in accounting for death, we are racially divided. The brutal death of a farmer should grieve us as much as the tragic death of yet another Cape Flats schoolgirl raped and murdered in a neighbour's backyard. But depending on which newspaper you read, the one is regular news and the other not.

What happens now that the #BlackMonday protest marches are over and two-toned khaki resumes being the colour of choice for white farmers?
Opinion & Analysis
3 years ago

The outgoing statistician-general played the same game with proportions the other day. He tells us that the proportion of black graduates progressing through higher education was higher in the 1980s than in 2017; in fact, black graduate numbers stood at about 15% in 1975 and declined since then to about 5%. How could this be news? In the 1970s a small handful of black students accessed higher education and that number came from a small and largely stable school system with a relatively rigorous standard (exemption) for university entrance.

Right now there are more than a million students in post-school institutions, with many from dysfunctional schools passing a relatively low bar for entrance into higher education. The sheer growth in numbers alone explains the disparity between the past and the present. But then the SG goes beyond the numbers and makes statements for which he does not have firm data - that the difference is explained by less funding for students now.

I would suggest that an equally plausible reason for low graduations and slow time-to-degree has to do with the poor preparation of high school pupils for the rigours of a university qualification.

The last time I saw such energy in a room was in a hellfire-and-brimstone Pentecostal church service.
Ideas
3 years ago

Whether it is murder or graduations, the numbers do not speak for themselves. They tell a much larger story of a broken country still at war with itself. And yet, if social media sites are anything to go by, there now appears to be a growing consensus about things we violently disagreed with.

For one, very few white South Africans believe the old apartheid flag should be displayed; in fact, several call for it to be banned. More and more black commentators make the case for action on farm murders. It is slow, but I detect a shift towards the middle ground among black and white South Africans.

While Monday's march was under way, a white farmer near Vryheid in KwaZulu-Natal was murdered on his farm. The farmworkers pursued the killer and took his life in turn. Both murders were tragic. And yet, even in this tragedy, those old race loyalties dissolved.