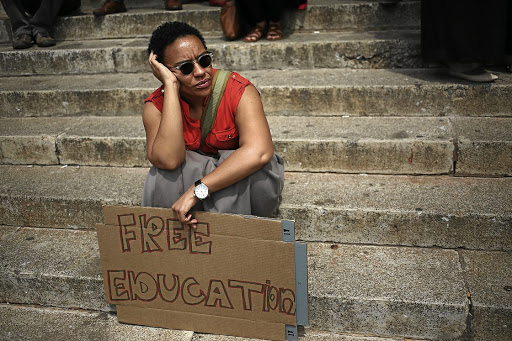 PUNCH BAG Universities across the country could fail if the government does the unthinkable and declares free higher education for all in the wake of the leaked Fees Commission report Picture: Alon Skuy

There is speculation that President Jacob Zuma might announce free higher education across the board.

There is also speculation that he might follow the advice of a future son-in-law and cut departmental budgets to the tune of R40-billion to make this possible.

If true, such a decision would fly in the face of a considered - albeit leaked - report by the so-called Fees Commission that free higher education is not feasible at present.

I was always amused when officials told us that "the president is studying the report" of the commission.

First of all, the president does not study anything. And if he did, how long does it take to study a report while campuses are under sustained attack in part because of the non-release of the now-leaked report?

No, the reason the president has not released that report is because he is scared that all hell will break loose if the commission's finding becomes known and he does the right thing - to confirm the reasoned judgment of these wise commissioners.

Zuma will employ unicorns to move money around for free education

On Tuesday‚ South Africa proved Abba right: it is funny in the rich man’s world.
Ideas
4 years ago

I am also sure there were some leaders in higher education asking that the report be released after the year-end examinations; nothing strikes more fear into university management than the prospect of losing the academic year in October/November.

Regardless, our president is a man for which everything is a political calculation. You do not need Jacques Pauw or Thuli Madonsela to tell you that No1 does not make judgments based on what is sensible for the fiscus or in the best interests of the country.

Here you have short-term political calculation to benefit the man himself and his political agenda.

It would be bad politics for the president and former Mrs Zuma going into the party's election having set the campuses alight with the necessary announcement - free higher education is not feasible at the moment.

So, he is expected to do the unthinkable and declare free higher education for all.

This would be a disastrous decision. We do not have the money to do this. If the president makes such an announcement, like he did with the 0% fee increase decision two years ago, it would place the annual budgets of universities in a precarious situation.

Where would the replacement money come from and, most importantly, how would such an expectation be sustained over multiple years? Put differently: even if the president could magically cut billions from budgets, he would have to do that in perpetuity.

If President Jacob Zuma moved ahead with an alleged plan to announce free education across the board through a controversial funding scheme it would ...
News
4 years ago

By the way, ministers would rebel at the cutting of their budgets for they would be left exposed financially and politically in terms of their own agendas; and university managers would have to fend off sustained attacks on people and property every year because of the uncertainty about where the next year's funding would come from.

Somebody please explain to the president the concept of recurrent expenditure.

None of this matters to a man who thinks only about himself and the immediate political moment in which he lives.

With such a disastrous decision, his preferred candidate, Nkosozana Dlamini-Zuma, would no doubt be at a political advantage going into the party's elections next month and readily claim this radical decision as her's.

It would, nonetheless, be a serious miscalculation even in the most immediate political reckonings of the presidency.

Those who think the campus protests are simply about free higher education have not been paying attention. As I indicated in my book, As By Fire, there are multiple factions that propel the instability on campuses.

The last time I saw such energy in a room was in a hellfire-and-brimstone Pentecostal church service.
Ideas
4 years ago

Some of the more violent protest groupings are about a constantly changing list of demands from decolonised education to the withdrawal of charges against campus criminals to free student accommodation and more.

The idea is not the resolution of anything; it is to keep campuses unstable, whether for broader party political ambitions or straightforward gangsterism operating behind the mask of legitimate student activism.

On the other hand, if Cyril Ramaphosa wins the coming party and presidential elections, such a "free for all" decision would amount to a hospital pass for the country's new leader.

Nevertheless, if the incoming president has any common sense, he would declare free higher education for poor but talented students, and a differentiated payment plan for the rest of the student body based on the family's capacity to pay.

The hard truth is that education is never free for anybody. Somebody always pays.