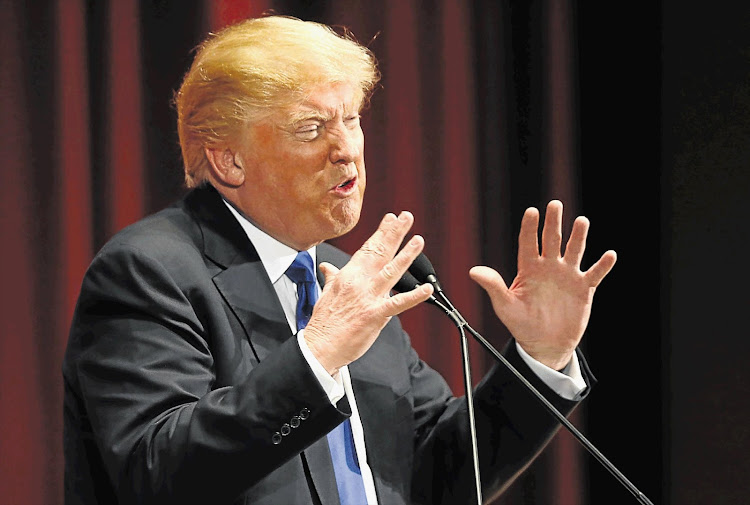 I don’t expect you to read this. I know you have a quota of about 100 words a day and you already blew that sounding out the syllables running along the bottom of Fox & Friends this morning, but I want to write it anyway, because there’s something you need to know that will make your life much, much better.

I am a thing we call a “writer”, living in a place called “South Africa”. I know that’s a lot of information to take in all at one go, but all you need to know is that “South Africa” is in a distant land called “Africa”, curiously enough at the southern end, and a “writer” is someone who writes words for a living. What’s “a living”? Well, it’s something that people have to make who aren’t, like, really smart enough to be handed a fortune by their pappy. OK, everyone up to speed? Good.

Donald, today I read that you are angry about the US accepting migrants from “shithole countries” in Africa rather than places like Norway. This made me feel sad, because, as you’ll recall from the previous paragraph, I live in the southern bit of Africa.

I wanted to write you a dazzling list of rebuttals. I wanted to stun you with facts and figures about the energy of this continent and the courage of my own compatriots. I also wanted to help you understand some of our history. For example, since we’re talking about shitholes and the people who dig them and then shit in them for centuries, I wanted to tell you about something called “the trans-Atlantic slave trade”. I wanted to introduce you to the four South Africans who have won the Nobel Peace Prize, including Nelson Mandela with whom you claim to have had a “wonderful relationship”. (It must have been something truly extraordinary, what with him smiling and nodding and edging for the door as you kept asking him what it was like spending those 40 years inside Shawshank Prison.)

But here’s the thing, Donald. A list of rebuttals wouldn’t change what we in the Shithole South laughingly call your mind. You’re just not into facts, probably because they don’t have a pussy to grab.

Besides, you’d probably see my list as confirming my country’s shithole status. It’s not as rich as yours, or as powerful. We don’t have a big nuclear button. In fact the only way we’re like the US is that we’re also ruled by a stable genius who is into nepotism and gaslighting as policy.

So no. I can’t claim any high ground when it comes to economic or even political facts and figures.

You are the real deal, Donald. You’re a gold-star racist. You are an uber-cracker, a genetic miracle bringing together the entitled ignorance of a modern billionaire with the owl-killing, witch-burning superstition of a medieval hovel-dweller.

But, Donald, there is one thing my tribe has excelled at over the centuries. No, wait, that’s falsely modest. We’ve been brilliant at it. I’m talking a kind of genius here, and not just the stable kind.

And that one thing is racism.

Donald, my people are racist savants. As a white South African man, I am the inheritor of a tradition of racism so blisteringly hateful and so deeply ingrained and toweringly self-righteous, that it makes your chino-wearing, tiki-torch-waving, white-bread white supremacists look like the bedwetting snowflakes they are.

I know I’m pulling rank here, Donald, but you need to understand that I know what I’m talking about. It was my tribe that decided whether people were black or not by sticking a pencil through their hair and seeing if it stuck or fell out. We’re scientists, Donald.

What I’m trying to say is that in the rarefied world of untransformed and unrepentant racists, my tribe walks shoulder to shoulder with the best of the worst, whether they be Russians sniffing out Jewish tendencies, Indians obsessing over caste, or Chinese gaping at black people.

All of which makes me particularly qualified to tell you something important.

You are the real deal, Donald.

You are an uber-cracker, a genetic miracle bringing together the entitled ignorance of a modern billionaire with the owl-killing, witch-burning superstition of a medieval hovel-dweller. Your racism is ancient and powerful. It whispers to me the way Kellyanne Conway whispers to you in that dream you keep having, the one where she’s only 5cm tall and she’s trapped inside a Big Mac and begging you to eat more carefully.

And now that you know what you are, it’s time to own it. Embrace your nature, own your crackerhood, and all the anxiety and complexity will just slip away. No longer will you be forced to use politically correct euphemisms like “shithole countries”: instead, you can just say “no blacks”. No longer will you have to talk about countries like Norway: rather just say “Aryans only”.

Donald, the whole world knows what you are. It’s time you knew it, too.