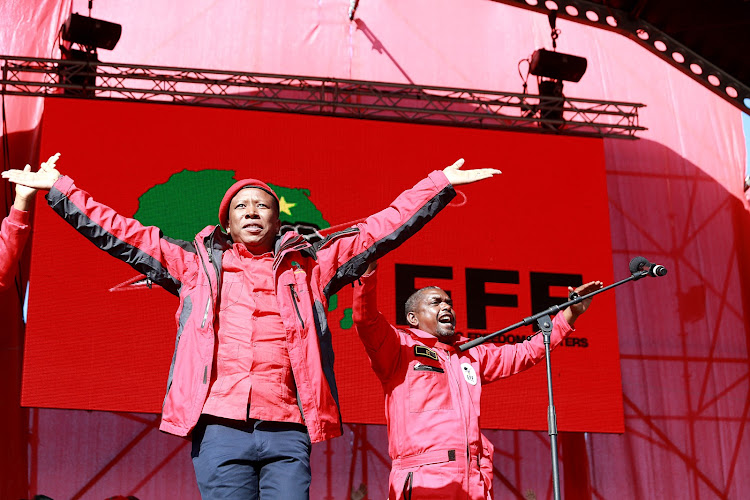 A few days late and many dollars short‚ as the old saying goes‚ Cyril Ramaphosa on Saturday in East London delivered the ANC January 8 statement in celebration of the movement’s 106th anniversary.

The lack of funds is not a reflection on the self-styled Buffalo Man’s huge net worth‚ but on the costly populist promises his party saddled him with alongside their decision to elect him ANC president last month. Still‚ both Ramaphosa and the breathless commentariat enthused that an indicator of the change he symbolised was the fact that the ANC rally had commenced on time.

However‚ unpunctuality remains the calling card of ex-party president Jacob Zuma. His time delinquency would be of little matter‚ were he not still country president. And‚ in that capacity‚ he apparently made Kenyan president Uhuru Kenyatta cool his heels for over an hour before the great man from Nkandla pitched for their meeting.

Who will be South Africa’s next president? With Deputy President Cyril Ramaphosa giving a clear indication in television interviews on Sunday that ...
Opinion & Analysis
4 years ago

Doubtless‚ Kenyatta awaiting the tardy Zuma would brand him as conforming to the stereotype that Mazrui defined acidly some years before his death in 2014.

“Africa as a whole‚” he offered‚ “has borrowed the wrong things from the West … we wear the wrist watches but refuse to watch it for the culture of punctuality.”

So perhaps there is more to Ramaphosa’s task-on-time commitment than merely improving meeting starting times. It could herald deeper changes to come and an embrace of disciplined modernity‚ not the revanchist indiscipline of the Zuma era.

However‚ on the subject of his predecessor‚ Ramaphosa seems to moving in a crab-like fashion: no full frontal assault on JZ but a commitment – in easing him out the door – that “we should never humiliate Zuma.” One could argue that this promise is utterly superfluous: Zuma does a great‚ almost daily job‚ like Trump‚ of humiliating himself.

But‚ on a less irreverent note‚ here is a more difficult circle to square‚ along with expropriating land without compensation without disturbing economic confidence. Trying to tie up contradictory commitments is hardly novel or even South African. In the US‚ when politicians use dog-whistle calls to reassure their base while implementing policies likely to unsettle them‚ it is called “threading the needle.”

Dear Donald, I don’t expect you to read this. I know you have a quota of about 100 words a day and you already blew that sounding out the syllables ...
Ideas
4 years ago

Ramaphosa is going to need all his sewing skills to keep his commitments on track and his wildly diverse constituency placated. The early test‚ beyond his dexterity in ridding himself and the country of the Zuma incubus‚ will be in pairing “we should never humiliate Zuma’’ with his calls for the speedy prosecution of state captors. And here “number one” is already “accused number one’’. And that all relates to the indictment first served on him way back in 2007. Never mind all the future charges likely to flow from the state capture judicial inquiry. But someone in our midst who has embraced the culture of the uber expensive wristwatch‚ in his case a Breitling‚ is EFF leader Julius Malema. Not simply a loud-mouthed swaggering bully in the Trump mould‚ he embraces reckless violence in order – again Trumpesque – to keep the spotlight on himself‚ at all times and regardless of the damage done.

The EFF-approved looting of H&M stores was an update on quite how dangerous Malema’s nihilistic populism is‚ and the lengths to which he will go to command attention. In a perverse way‚ it could be argued that this also heralds the change in his political fortunes with Ramaphosa at the helm.

Malema was never remotely a constitutional democrat. He is simply an instrumentalist: he cherry picks those bits of the constitution that suit him – immunity in parliament‚ court cases to expose Zuma’s predations and the oxygen of a free media – while vandalising its commitments to non-violent and hate-free expression and conduct.

Just as many South Africans were recovering from the drama caused by the Economic Freedom Fighters over the weekend‚ the red berets yet again stormed ...
News
4 years ago

Of course‚ even the most avowed anti-Malema-ites (around 90% of voters when last counted) were quite thrilled when he used his antics against Zuma‚ a figure against whom so many could unite.

Now‚ with Ramaphosa‚ you have a horse of a very different colour. Hence the faux outrage against the H&M racial insensitivity and worse‚ for which the global chain had already apologised and taken action.

Just quite how fake the EFF affront really is was rather brilliantly placed on Trump’s favourite medium of expression this weekend.

Sharon Thembeka Jack offered on Twitter: “So where was the EFF outrage against Nivea and Dove racist ad campaigns? Oh I forgot‚ they didn’t coincide with #ANC 106.”

But if Ramaphosa starts to deliver on his better governance and anti-corruption pledges‚ expect the EFF attention seeking to grow more desperate and more violent.

In the larger corner of the opposition fold‚ the Democratic Alliance is receiving bucket loads of attention but for all the wrong reasons.

The Economic Freedom Fighters must be held accountable for all the damages incurred as a result of vandalism at a number of H&M stores‚ the ...
Politics
4 years ago

As the party and Cape Town Mayor Patricia de Lille prepare to face off across a disciplinary hearing over the next 60 days‚ I am reminded me of the Cold War phrase on the nuclear threat: “Your victories can land up costing you far more than your defeats.”

In August 2016‚ the DA won over 66% of the vote in Cape Town. In Pretoria‚ Johannesburg and Port Elizabeth it never won a majority‚ barely squeaking a plurality in two of the cities‚ and got less than 40% in Johannesburg. Yet there is no internal party dissent over Mayors Msimanga‚ Mashaba and Trollip. But in Cape Town‚ where the party has the huge majority‚ there is no end to the dispute.

Just ask the vanquished Thabo Mbeki – who went entirely unmentioned when Ramaphosa extolled the legacy of past ANC leaders on Saturday. Mbeki is living proof of what happens when you sit on a big victory. In 2004 he obtained the highest ever percentage of the poll for his party. He was gone three years later.