It's entertaining but will the DA's 'cheap shot' ad win the youth vote?

Image: DA A screen grab from the 'This is the Real South Africa' 2019 election advert by the Democratic Alliance. The video had been viewed almost 100,000 times via the party's Twitter handle by Wednesday morning.

Let's acknowledge that we're a young democracy and that the kind of televised political advertising that many other countries are accustomed to is a relatively new phenomenon in South Africa.

In the era since democracy, perhaps our most consciously socially and politically aware televised adverts have been epitomised not by political parties but by a chicken franchise. You need only watch "Pluck", the recent award-winning documentary on the history of Nando’s advertising, for confirmation of this. However, on Monday night that all changed – or so the Democratic Alliance would have you believe.

In a new advert, titled "This is the Real South Africa", the DA, blatantly ripping off the internet-breaking Childish Gambino video This is America - released last year and viewed over half-a-billion times on YouTube - stages a short, sharp, seemingly ironically aware call to action for South Africans to save the ideals of the Rainbow Nation by placing their crosses next to the smiling face of Mmusi Maimane.

Before analysing the video it's worth remembering that the first advert for the party, screened a month ago, was a much more, orchestral sound-tracked, heart-tugging affair – appealing to the faith of South Africans of all religions to give their support to pastor/second coming Messiah Mmusi. Never mind the irony of its depiction of the mourning of Western Cape mothers at the loss of their children due to gang violence in a DA run province – the DA’s first advert was squarely well-enough executed and firmly aimed at traditional values – not an attack on anyone so much as a plea to those who have faith to put that faith in the DA on May 8.

Since then whoever is behind the DA's campaign has clearly decided that this kind of traditional message is too square for the young voters the party needs to attract. And so the party’s latest advert has stepped up into attack mode with an advert that directly and non-ironically references Donald Glover's groundbreaking critique of Trump-era America to paint a picture of South Africa in crisis, caused by the policies of the ANC.

The main actor in the ad, DA Youth leader Luyolo Mphithi, begins with a rosy recall of 1994 and the values of the Rainbow Nation before stepping out into a world filled with ANC leaders shooting guns and carrying out cash-in-transit heists, references to Marikana and the Bosasa scandals, EFF members looting VBS ATMs, and a SAA jet crashing to the ground. Then there's the Eskom crisis, which leaves us in a shack in the light of a candle being told to vote for the DA to keep the lights on.

At 90 seconds, the ad is too long for television so it's squarely aimed as an online viral video for today's connected youth. 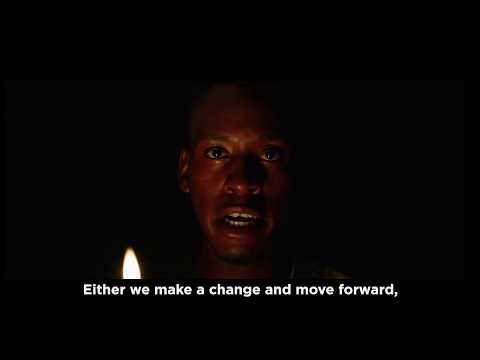 DA spokesperson Solly Malatsi, in a press release this week, declared that while "the DA will never delight in the failure of the ANC, millions of people have been let down by this government and it is with them that we empathise.

"That is why we are depicting this picture of the state of our country to encourage people to vote for change on May 8. We cannot afford another five years of ANC government, which will be later labelled as ‘wasted’ years," said Malatsi.

That may be so but judging from responses on Twitter and social media, the reason for the many viewings of the advert is not only because of DA supporters who approve but also because of other viewers who are shaking their heads at the arrogance of the party’s attacks and pointing out that it is not as blameless as it would like to believe, particularly when it comes to issues of crime, poverty and social disparity in the Western Cape where it still holds sway.

There's also the problem of context – Donald Glover's critique of America served no other purpose than a critique - it wasn’t created in service to electioneering and you get the feeling that he has more of a sense of irony than the DA, who have an annoying tendency to act holier than thou when it comes to South African politics.

Whether the youth that the party is so desperately trying to pander to will make their mark next to Maimane's face on May 8 because of this frankly glossy but cheap shot advert remains to be seen. Irrespective, the DA can claim points for upping the bar as far as South African political adverts are concerned – now the ball is firmly in court of their opponents.

There are plenty of blindspots in the DA's version of events to be exploited but will anyone take the bait and at least provide us with some entertainment to alleviate the general earnestness and empty promises that tend to dominate our election season?

* The video has been viewed almost 100,000 times via the party's Twitter handle as of Wednesday morning.