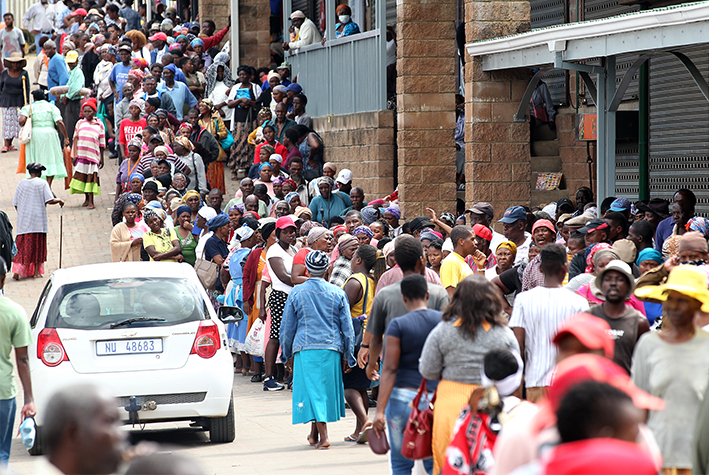 The ongoing lockdown, now under risk-adjusted alert level three, has brought to the “public eye” the gravity of urban food insecurity ravaging millions of the urban poor and working class in South African townships and informal settlements.

While some of the primary causes of this ubiquitous food insecurity that include chronic poverty, under-employment, unemployment, inequities in the urban food system and exorbitant food prices precede this pandemic; the lockdown and its associated impacts, is a new factor that has deepened food poverty.

This, however, does not mean there is food availability decline or a shortage of food in SA. Far from it, this country has abundant food, enough to feed almost everyone daily. In fact, as much as “a third of all edible food in South Africa is never consumed and ends up in landfill” (WWF South Africa, 2020).

From a distributive justice perspective, this wastage is immoral and unethical since this food could be made available, through different formal and informal channels, to the millions who need it most. However, in the unjust and unequal society we live in, this excess food is not distributed to the needy but is thrown away to rot.

This reminds us that the current urban food system and supply chain is inequitable and lacks the basic principles of humanity.

It is worth remembering that the roots of this urban food crisis are not only historical but also partly a product of neoliberal macroeconomic policies pursued since 1994. Some of these are the Growth, Employment and Redistribution (Gear) programme and its surrogates the Accelerated and Shared Growth Initiative for South Africa (Asgisa) and New Growth Path (NGP) etc. These economic structural adjustment programmes, in their “Washington Consensus robes”, lowered, and in some cases, removed state subsidies on a variety of public goods and basic commodities. Their anti-poor, anti-working class, neoliberal approach promoted the “invisible hand” of the market in determining prices, including those of food.

Since then, many on low incomes and urban poor have sunk into food poverty because they don’t have adequate disposable income to buy a dietary diverse food basket. Their hunger and dire existential conditions have worsened under the current prohibitive operational guidelines of the lockdown.

Take, for example, informal economy traders who have been unable to generate income for more than two months, the many low-skilled workers in the tourism and hospitality sector and those on low-paying precarious contracts with little or no savings. Also, imagine the income deprivation of young men and women who, before the lockdown, survived on daily casual so-called “piece jobs”. Their sources of livelihood have virtually collapsed, pushing them to the brink of poverty and starvation.

Since being declared an essential service under lockdown, street trade in SA’s biggest city has returned to uneven ground.
News
1 year ago

We have to ask: what has the government, non-governmental organisations, corporates and individuals with means done to alleviate this urban food crisis?

In all fairness, all four stakeholders have implemented various social-relief interventions that have, to some extent, assisted many vulnerable people in townships and informal settlements. For example, the Solidarity Fund’s (2020) “humanitarian disbursement took the form of a R120m donation to provide emergency food relief to over 250,000 distressed households across South Africa”.

Working in partnership with more than 400 community-based organisations, the Solidarity Fund identified, co-ordinated and distributed food parcels and cash vouchers to vulnerable households on a short-term relief basis. Despite some limitations in their programme implementation, their emergency intervention has provided food relief in communities where government social safety nets are non-existent or inefficient.

Similarly, Gift of the Givers Foundation partnered with Woolworths to provide food parcels to many families in dire straits.

However, a question that has been raised in relation to all donations from non-state actors is: to what extent are these food parcels composed of dietary diverse and dignified food items? Though difficult to answer now, this important question speaks to issues of respect of people and human dignity even in emergency-relief situations.

The government’s food relief response has been full of contradictions. In an attempt to fulfil its responsibility to protect and fulfil the right to food as enshrined in the bill of rights, different government departments are implementing various emergency social and food-relief measures.

This constitutional obligation, while omnipresent, became urgent at the onset of the lockdown.

School is a break from work, hunger for teenagers like these

Matilda is 12 and operates a small stall selling packets of chicken, sausages, fish and some scones baked by her aunt. On a cold evening, she was ...
News
1 year ago

For example, by end of May 2020, the department of employment & labour had disbursed more than R55,572,870 Unemployment Insurance Funds (UIF) to low-income working class who met eligibility criteria. However, millions more deserving people had been unable to benefit from the UIF because, for whatever reason, some employers had either not lodged claims while others had supplied unverifiable bank details. This unnecessary procedural bungling means millions of deserving beneficiaries remain in limbo and hungry.

Similarly, although the department of social development, through the South African Social Security Agency, currently provides a welcome R350 social distress relief grant for unemployed citizens and some foreign citizens, this money is simply inadequate to buy a dignified and dietary diverse food basket for a nuclear family. Further, disbursement of this R350 grant was not only delayed but has been bedevilled by systemic and bureaucratic bundling, leaving millions of qualifying unemployed citizens in hunger and distress.

To be clear, the problem here is not lack of state funds but their management and timely distribution within the public finance management regulations.

As a result, despite their best efforts, the government’s social protection system has largely fallen short of meeting its primary objectives in the ongoing emergency response to ensure urban food security.

While the ongoing emergency social and food relief measures are providing welcome relief, they are not a permanent solution to the urban food crisis.

It is becoming clear the Solidarity Fund's food parcel distribution programme is no longer sustainable, with a feeding strategy rethink needed as ...
News
1 year ago

Even though we must welcome progressive proposals by social justice movements that the sunset provision of the R350 Covid-19 social distress relief grant be revised to make it permanent, this must not blind us from questioning whether the state has the financial capacity for expanding its social safety nets.

Can the state afford to maintain this new grant under current depressed economic conditions? Alternatively, should the state redirect funds from elsewhere in the “public purse” to cater for this new social assistance obligation?

What is not in question though is that long-term solutions that will address the root causes of the urban food crisis are required. These include, but are not limited to, addressing the macroeconomic fundamentals that will be the basis for creating business opportunities in the “new economy”, employment creation, taming food price inflation and reconstructing the urban food system.

In all probability, once this macroeconomic policy foundation is fixed and “fit for purpose”, only then can we begin to see urban food poverty diminish.

For eight weeks, three siblings in Vlakfontein, south of Johannesburg, survived on food scraps from neighbours and cabbages grown next to their shack.
News
1 year ago

Low-income families have increased their spending on food by more than 30% since March when the national Covid-19 lockdown began.
News
1 year ago