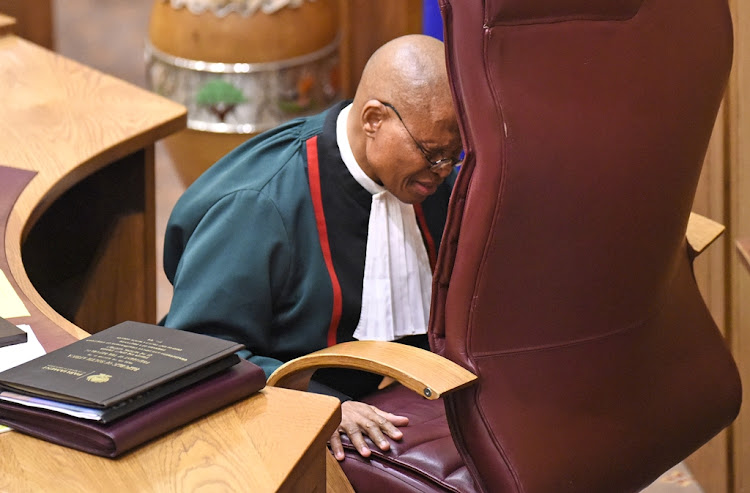 The writer has heavily critisised Chief justice Mogoeng Mogoeng for his stance on what is currently happening in Israel.
Image: Gallo Images/Brenton Geach

My name is Associate Professor Haidar Eid and I am writing this letter from besieged Gaza in occupied Palestine. I also happen to be a SA citizen as I spent 7 seven years in SA where I obtained my PhD degree from the University of Johannesburg. I worked at this university and at Vista University in Soweto.

I am writing you this letter after watching, with horror I must say, the notorious webinar organised by the right-wing Israeli paper The Jerusalem Post on June 23 in which you expressed support for apartheid Israel, citing the Bible. To our horror here in Palestine where we are fighting for our mere survival thanks to the racist policy of Israel, you had no sympathetic words whatsoever for our oppressed women and children. You went further and suggested the opposite by blaming the victim and asked your own postapartheid government to support Israel!

This is due to the fact that, “[you are] under an obligation as a Christian to love Israel, to pray for the peace of Jerusalem, which actually means the peace of Israel. I cannot, as a Christian, do anything other than love and pray for Israel because I know hatred for Israel by me and my nation can only attract unprecedented curses upon our nation”.

And we couldn’t help wondering whether the man uttering these words is a Black brother from SA? The country from which we learnt lessons about the fight against all forms of racism and bigotry, the country of Nelson Mandela, Steve Biko and Desmond Tutu — to mention but a few anti-apartheid heroes who are household names in Palestine.

Allow me to say, with the utmost respect, that your utterances are extremely ignorant coming from a man who is supposed to know better about not only apartheid, but also justice, a word that is attached to your name, Sir. I am writing to you from the largest open-air prison on earth, from under a ‘medieval’ siege, our land, air and sea borders controlled and blockaded by the fourth most powerful military in the world — that of the state you have decided to support ... I am a Palestinian academic, who experienced first-hand Israel’s genocidal onslaughts of Gaza in 2009, 2012 and 2014 that killed over 4,000 people, including over 1,500 of our children, war crimes outlined in the United Nations Goldstone Report.

In July 2008, a SA delegation, including ANC members and ex-members of your own Black Consciousness Movement, visited Israel and Occupied Palestine. They unanimously concluded that Israel’s treatment of Palestinians was far worse than SA apartheid. Politician and former deputy minister of health Nozizwe Madlala-Routledge said, “What I see here is worse than what we experienced — the absolute control of people’s lives, the lack of freedom of movement, the army presence everywhere, the total separation and the extensive destruction we saw ... racist ideology is also reinforced by religion, which was not the case in SA.” Sunday Times editor Mondli Makhanya added: “It is worse, worse, worse than everything we endured. The level of apartheid, the racism and the brutality are worse than the worst period of apartheid.”

Your appearance on The Jerusalem Post webinar means that you have decided to turn your back on us the Palestinians who have endured over 71 years of Israel’s horrific apartheid and ethnic-cleansing policies. It is also, and allow me to say this, a tragic example of the short memories of people wronged in the past by racial oppression.

I have heard that you took part in the Black Consciousness Movement in the 1980s of last century! What has happened to that spirit of resistance now? What could be a more peaceful way to fight injustice than to boycott a settler colonial state, described by former SA UN Special Rapporteur John Dugard as the only remaining case after SA, “of a Western-affiliated regime that denies self-determination and human rights to a developing people and that has done so for so long”.

In case you didn’t know, we are Palestinians, the undesired ‘ethnic group’ for apartheid Israel, victims of what the Israeli academic and historian Ilan Pappe describes as Israel’s, “incremental genocide”. Those remaining in the tiny Bantustans of land from where Israel has not yet expelled us face military occupation and attacks, continuous settler harassment and racial discrimination that echoes the worst traits of apartheid. Most of the 7 million Palestinian refugees worldwide remain in squalid refugee camp ghettos, reminiscent of Black and Coloured townships, deprived of the right to return to their land in complete violation of UN Resolution 194.

But you must have known this when you participated in that webinar!

What about the Christian segment of the native population, the Children of Jesus? They are either under direct military occupation, or third-class citizens of the state you have so much love for! Doesn’t that ring a bell, Dr. Mogoeng?

This means that you have decided to completely ignore the fact that — instead of showing solidarity with us, the voiceless and imprisoned — you are siding with apartheid. Israel, by definition is an apartheid state that is NOT the state of its citizens, but rather the state of only Jews born to Jewish mothers. What about the Christian segment of the native population, the children of Jesus? They are either under direct military occupation, or third-class citizens of the state you have so much love for! Doesn’t that ring a bell, Dr Mogoeng? You, instead, prefer to put your weight behind those who have  humiliated our Palestinian mothers in West Bank checkpoints, dropped bombs and white phosphorous on our civilian populations, bulldozed our villages, olive groves and farmland?  Since its founding on the ruins of Palestinian refugees in 1948, Israel has violated more UN Resolutions than any other member state.

We were expecting you to support the 2005 call by 171 Palestinian civil society organisations calling for “Boycott, Divestment and Sanctions (BDS) against Israel until it complies with international law and universal principles of human rights”. Unless you had a problem with this tactic inspired by the struggle of our black brothers and sisters in SA? As was successfully directed at the SA regime, boycott is a vital mechanism to hold Israel to account for crimes that have for so long been granted immunity by the international community.

We urge you to stand on the right side of history and remember how many stood up for SA when it was not fashionable to do so. As BDS advocate Archbishop Desmond Tutu said, “I never tire of speaking about the very deep distress in my visits to the Holy Land; they remind me so much of what happened to us black people in SA. I have seen the humiliation of the Palestinians at checkpoints and roadblocks, suffering like we did when young white police officers prevented us from moving about. My heart aches. I say, “Why are our memories so short?”

Why are your memories so short, Chief Justice? Why?

Mogoeng Mogoeng on how leaders stoked fear during Covid-19 pandemic

“Even the people of faith where boldness is supposed to be found, suddenly the faith that they used to have in the almighty God is not there anymore. ...
News
1 year ago