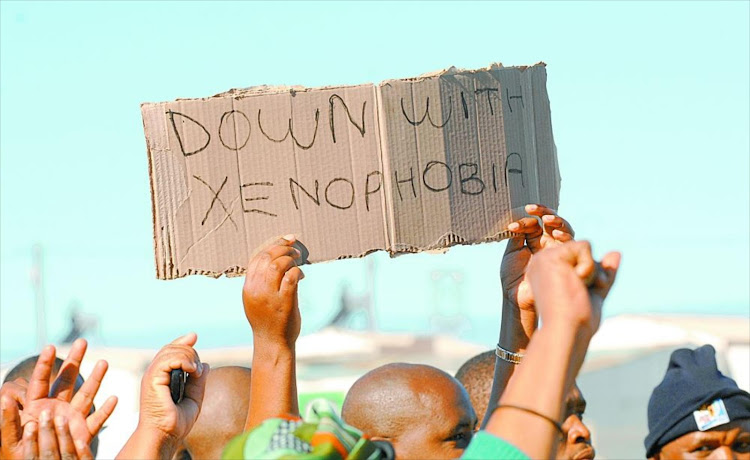 Foreigners in SA have been targeted by people who believe they are responsible for crime and 'steal' jobs that South Africans should have.
Image: Mike Holmes

In recent months, as SA has been dealing with the economic fallout of the Covid-19 pandemic, there have been growing calls for migrants to be deported and for the government to take action against crimes allegedly committed by people born outside the country.

A recent analysis by the Atlantic Council’s Digital Forensic Research Lab showed how a number of bots and fake accounts have been behind some of the most xenophobic propaganda online. In 2008, more than 60 people were killed in xenophobic violence. In September 2019, violence again broke out in Johannesburg after online messages were disseminated demanding that migrants leave and refugee camps be opened.

The flyer circulating before the violence called for a mass shutdown and for all “to come together as South Africans with one voice of enough is enough, on selling of drugs, on property theft, and on our work taken by foreign nationals.

“We as the people who fought for this freedom, find no respect from the owners of the companies and what is going to happen on the 2 September 2019 is to show our dissatisfaction, and to use our right to vote by taking out foreign nationals from our work,” the pamphlet warned. “SA for South Africans. This is not xenophobia but the truth.”

Now, just more than a year later, the online army of trolls that back these xenophobic messages is calling for a march on the Nigerian embassy on Wednesday September 23 2020 over “drugs and human trafficking”. This comes after a march was planned on August 29 with similar intentions, though nothing came of it.

Commentators and the government want us to believe these incidents are sporadic and spontaneous, seemingly coming out of nowhere. But just last week, there was tension between South African and migrant vendors at a market in Yeoville. And at the end of July, mobs of South Africans marched through the streets of Phola Park in Thokoza, east of Johannesburg, evicting migrants from their homes and burning their belongings in the streets.

While they were doing this, South Africans proudly chanted, “We are just spring cleaning”, and “We are sanitising the area.”

It is in this context that Human Rights Watch released a report into xenophobia in SA. “They Have Robbed Me of My Life”: Xenophobic Violence Against Non-Nationals in SA looks at the systemic nature of xenophobia in SA.

Based on interviews with 51 people in Gauteng, Western Cape and KwaZulu-Natal, the report looked at how xenophobic sentiments and violence are commonplace in everyday settings. The report’s author, Kristi Ueda, the Africa division fellow at Human Rights Watch, detailed horrific incidents of xenophobia in the classroom, including the attack on Donette Ngonefi, a grade 10 pupil at Salt River High School in Cape Town.

“She was severely beaten on August 27 2019 by fellow students who thought a non-national was undeserving of being elected as class monitor. She spent nine days in the hospital because of her injuries,” the report states.

“When this report was finalised in August 2020, Ngonefi had still not returned to school out of fear, as her attackers are still attending the school but have faced no consequences for attacking her.”

In the panel discussion after the release of the report, Ueda said: “One teacher we spoke to explained how he cannot even get through a lesson without being called a foreigner and mocked by his students.” The report found that harassment and verbal abuse were common features of migrants’ experiences in SA.

“In addition to being targeted by mob violence, non-nationals whom Human Rights Watch interviewed for this report said they have been harassed verbally and physically by South Africans for being foreign and not using local languages in their daily interactions, including while walking on the street. A common and hurtful insult thrown at foreigners is the label ‘kwerekwere’, a derogatory and slang word used by black South Africans to mean foreigner,” the report says.

Ueda said scapegoating migrants for social ills, unemployment and a lack of service delivery was commonly used as the motivation behind outbreaks of xenophobic violence. “Mob violence on African and Asian foreigners are often acts of retaliation and collective punishment for crimes allegedly committed by one or a few foreigners,” Ueda said.

“Also, violent attacks are conducted to garner the attention of government authorities who perpetrators claim have failed to deliver on the promises of delivering basic services and social infrastructure.

“And so when perpetrators feel the government ignores the poverty, the inequality and unemployment they find themselves in, mob violence seems to be organised for government attention and perpetrators scapegoat and blame non-nationals for their challenges in accessing basic services that non-nationals themselves actually have difficulty in accessing.”

‘Is there still xenophobia?’

One of the many recommendations made by the report calls on the government and government officials to acknowledge the existence and the scope of xenophobia in SA and to take into consideration the affect of words and actions.

South African politicians have a long history of denying the existence and the severity of xenophobia in SA. After the attacks in September last year, where at least 12 people were killed (the Human Rights Watch report found that 18 migrants were killed during the violence), department of international relations & cooperation minister Naledi Pandor went so far as to blame the media for painting SA and South Africans as xenophobic.

The government has condemned threats of violence aimed towards foreign nationals, and called on South Africans to desist from any actions that go ...
News
1 year ago

At a press briefing after the violence, Pandor said: “I think it is SA media that is depicting SA as xenophobic because SA media is very keen to keep this impression alive. I note the resistance of the media, even when respected actors in matters of human rights have said it is wrong to call SA xenophobic. The events that have happened are of concern, but maintaining this notion, which the media seems intent to do, is a problem for us.”

In 2015, after the murder of Emmanuel Sitole, a Mozambican migrant who was killed in Alexandra, then-president Jacob Zuma lamented: “What are we telling the world about ourselves?”

After those attacks, the government set up an ad hoc committee to investigate the reasons behind the violence against migrants. Both Ruth Bhengu and Tekoetsile Motleshuping, who were tasked with the investigation, insisted they were looking into “criminality” and not xenophobia.

“We must move away from this xenophobic word, because it brings us to the wars and makes it seem like South Africans hate foreigners, when we have lived with whites and Indians who we don’t know where they come from. We are proudly South African,” Bhengu said at the Jeppe police station in July 2015.

Earlier this year, Maj Gen Zephania Mkhwanazi, head of the police's division for operational response services, asked the South African Human Rights Commission to define the term xenophobia for him. He was addressing the commission at a hearing looking into the ongoing violence in the trucking industry, in which more than 200 people, most of them migrants, have been killed since March 2018.

The report further calls on the international relations & co-operation department to use effective early warning systems to monitor and mitigate threats and violence against migrants.

Ueda also recommended that the police carry out an internal investigation looking into a number of raids aimed at migrant shopkeepers in inner-city Johannesburg. Last year, the raids on alleged counterfeit goods resulted in many abuses. Human Rights Watch called on the police also to investigate complaints of excessive use of force and failure to conduct effective investigations into reports of criminal activity against migrants.

Nigeria to deliver aid by air in conflict-hit northeast

Nigeria's government plans to deliver humanitarian aid supplies by air to people in remote communities in parts of the northeast that have been ...
News
1 year ago

After decades of the disease posing a serious health-care crisis in Africa, the Africa Regional Certification Commission has declared the continent a ...
News
1 year ago

Nigeria to bar flights from countries that block Nigerians - minister

Nigeria will blocks flights from countries that do not allow Nigerian flights to land due to coronavirus restrictions, Aviation Minister Hadi Sirika ...
News
1 year ago