Forget Valentine’s Day, we must remember our own heritage 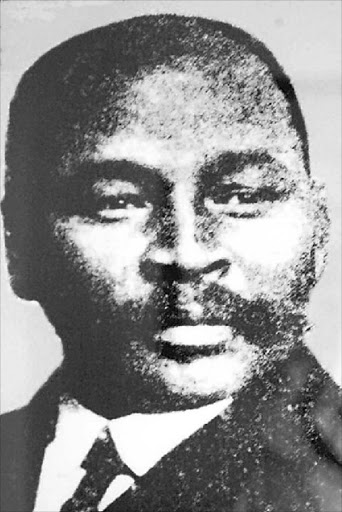 The writer says South Africans should celebrate the legacies of people like John Langalibalele Dube, the first president of the ANC, who died in 1946.
Image: File photo

I am aware that according to many people, February 14 is Valentine’s Day, which is “lovers day”, and people will be seen wearing red and white and dining out while celebrating the day. It is a date for exchanging love messages, gifts and flowers.

A man like me, who is perhaps too primitive to celebrate the day, would face wrath from his better half. If you question the origins of this day, you will be very unpopular.

Noel Lenski, a historian at the University of Colorado, tells us that from February 13 to 15, the Romans celebrated the feast of Lupercalia (an annual festival to avert evil spirits and purify the city). During the festival men sacrificed a goat and a dog and then whipped naked women with the rawhides.

The celebrations included a matchmaking lottery in which men drew the names of women to spend quality time with during the festival, or possibly longer after it.

This explanation alone should trigger all of us, the protagonists in the fight against gender-based violence (GBV), to abhor the day.

Included in this day is the execution of two men (one a priest and the other a bishop) by the Roman emperor Claudius II, both named Valentine, on February 14 of different years. Their martyrdom was honoured by the Catholic church with the celebration of “St Valentine Day”.

I wish the killing and maiming of our own cadres by the apartheid regime was commemorated like we commemorate the execution of Valentines.

I wish the killing and maiming of our cadres by the apartheid regime was commemorated like we commemorate the execution of Valentines.

The reason for their killings was that the emperor had put a stop to marriages because men tended to focus more on their wives than the wars of the time, and these two men would conduct matrimonial ceremonies inconspicuously, which was disobedience.

Perhaps it is fair to suggest that as years went by, the day grew sweeter as it was romanticised by Chaucer and Shakespeare in their works.

Maybe I should add it has been commercialised for business to profit billions annually.

For some of us, February 14 means something entirely different.

It is a day to remember the burial of Umkhonto we WeSizwe cadres ambushed on January 31 1981 by the evil apartheid regime when their three transit camps were attacked in Matola in Mozambique. Several comrades were killed during the raid that came to be known as the Matola Raid, part of Operation Beanbag and headed by Col Jac Buchner.

Murderous Matola raid only made our resolve stronger

It is hard to believe that it is now 40 years since 14 people were butchered brutally in three residences around Matola, a small suburb on the ...
Opinion & Analysis
2 months ago

Back then, as the Truth and Reconciliation Commission (TRC) report revealed, such cross-border operations by the SA Defence Force to fight anti-apartheid forces were common and sanctioned at the highest level of state machinery.

This infamous raid is commemorated every February 14.

The first commemoration in 1982 was addressed by the late ANC president Oliver Tambo and the late Frelimo and Mozambican president Samora Machel. On this day, the two revered leaders declared February 14 “The Day of Friendship” between the two neighbouring countries.

As a patriot, I advocate that we start celebrating our own heritage more than we celebrate Western-orientated consumerist culture, Valentine’s Day being a case in point.

Television stations, print media, mainstream radio stations, including community radio stations, should be giving us content about our liberation heritage. We owe our freedom to these martyrs.

I was once fortunate to visit Reunion Island in the Indian Ocean.

The island nation has about a million inhabitants, most of whom subscribe to Communist ideals, is a French colony and doggedly follows French culture. What astounded me was the level of patriotism among citizens. Despite immersion in French culture and customs, they were proud of their own heritage.

For them, they are not colonised because they acknowledge France discovered the island, hence their French descent. I was impressed by the fact that from a very young age they understood their history and heritage and celebrated common bonds together without coercion. For them, their culture and heritage is their way of life, something to be proud of.

If South Africans, had such a sense we would have commemorated the memories of Vusi Mtshali, Sibusiso Ndlovu and Mazwi Vilakazi, three young MK operatives who were assassinated on November 18 1988. These freedom fighters from KwaMashu were blown to pieces at the Phoenix railway station, north of Durban, for refusing to cooperate with the security branch police.

Apart from lesser known freedom fighters, we are duty-bound to also honour the legacies of those with higher profiles.

There are many such cadres we seem to have sadly forgotten. People like Blessing Ninela, who was abducted in Pinetown in June 1988 and murdered by apartheid operatives, as revealed at the TRC. The list of unsung heroes and heroines is long.

Apart from lesser known freedom fighters, we are duty-bound to also honour the legacies of those with higher profiles.

Take, for example, Dr John Langalibalele Dube, the first president of the ANC who died on February 11  1946. He was a larger-than-life politician, community leader, philanthropist and consummate editor. Born in 1871, he would have turned 150 in February 2021.

I am cognisant and gratified that the minister of sport, arts and culture, Nathi Mthethwa, has plans to mark the milestone of the passing of Mafukuzela. I hope the minister and his team won’t be shaken by worrywarts who will likely question the wisdom behind pumping resources into this project.

Not so long ago, the opposition spent their last energy negating the statue of president Tambo because he was depicted wearing a blazer with an ANC emblem. It was yet another pathetic attempt to erase history by wresting an important leader from the legacy of the ANC.

History can’t be erased. It is not criminal that these leaders did not serve in government and waged the struggle for freedom under the banner of the ANC.

Joao Rodrigues, who is facing a charge of murdering anti-apartheid activist Ahmed Timol in 1971, believes he was probably among those who were ...
News
6 months ago

Equally important is to note that Robert Mangaliso Sobukwe, who passed on 42 years ago on February 27 1978, was the PAC leader and that cannot ever be changed.

We need to celebrate such heritage, It is our heritage.

In 2020, the country celebrated the memory of comrade Harry Gwala, who would have turned 100 on July 30 2020. The ANC declared 2020 as the year of celebrating the life and immense contribution that comrade Gwala, affectionately known as Mdala and Ibhubesi laseMgungundlovu (The Lion of the Midlands), made to the struggle for our country’s liberation. Remembering Gwala’s memory was a step in the right direction towards keeping the legacies of all fallen comrades alive.

As we commemorate 40 years of the Matola Raid this February, every stakeholder needs to be encouraged to do their utmost towards ensuring this day remains memorable for generations to come.

When I was managing a resistance and liberation heritage route in the SADC region, a position that meant being based in Mozambique representing the department of sport, arts and culture, I was at the forefront of encouraging the department to consider conducting an annual pilgrimage to Matola of students and family members of those who perished during the raid.

As I saw it and still see it today, such a pilgrimage would enable us to relive our experiences, no matter how painful, and be acquainted with our liberation heritage. The current dilemma is that as former freedom fighters, we don’t share a common understanding of the past with the youth, which makes it impossible to share the common understanding of the current and future narrative when it comes to the plethora of fundamentals.

The plan was that, in the long run, we could create and champion the creation of an African Liberation Heritage in the SADC region, the former frontline states and beyond, resuscitating a common bond borne out of common struggles and common pain.

The department of basic education should begin to zoom into these historical events as part of the inter-ministerial team and develop a purpose-driven programme to inculcate a culture of patriotism. The approach to educate cannot be linear.

Thapelo Tsheole, CEO of the Botswana Stock Exchange, was recently quoted as saying: “We are currently engaging the ministry of education so we can start teaching our children about money, shares and financial literacy, not Shaka Zulu and cow horn formation. Those things are not relevant in this new age”.

This is a very unfortunate narrative.

We definitely need to be taught more about martyrs such as King Shaka kaSenzangakhona, an unparalleled philosopher and military strategist. From following the teachings of the heroes like all the ones I have mentioned above and many more, we, Africans, can create a better world, one in which we excel in different fields, including money, shares and financial literacy, as Tsheole advocates.

Knowing and preserving our heritage and history will point us to a bright future, one in which we are proud chroniclers of our own narratives and not hapless victims of distorted history.

Tambo once said: “Our task is not to preserve our culture in its antique forms but to build on it and let it grow to assume a national character, the better to become a component of an evolving world culture”

A lesson for today from the killing fields of our past

Meshack Radebe's funeral would probably not have been broadcast live on television were it not for the fact that his close friend, former president ...
Opinion & Analysis
1 month ago

The ANC government which paroled apartheid state assassin Eugene de Kock spent R200,000 a month in taxpayers' money for his upkeep, the Zondo ...
Politics
2 months ago

Giving voice, and an authentic history, to the women who fought apartheid