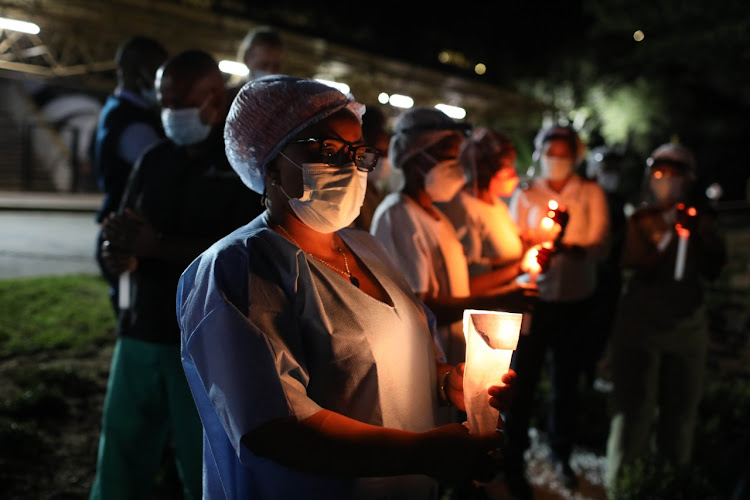 Health-care workers light candles in the Heroes Garden at Charlotte Maxeke Hospital in Johannesburg to honour the front-line workers and those who have died due to the pandemic.
Image: Alaister Russell

The World Health Organisation (WHO) has fittingly designated 2021 as the International Year of Health and Care Workers. More than ever, the world has come to recognise the invaluable contribution of these front-line workers as they continue to place their own lives at risk to save those of others in the face of the Covid-19 pandemic.

In SA, more than 40,000 of these selfless workers contracted the coronavirus in active duty, of whom about 2% have succumbed to Covid-19. The Sisonke programme to inoculate health-care workers could not have come quick enough since these front-line workers are three to four times more exposed to the coronavirus than the general population.

Without the contingent of the 28,000 community health workers (CHWs) undertaking door-to-door community screening and testing in the fight against this epidemic, not to mention the clinical care provided by the nurses in hospitals and makeshift wards, even more of the population would have been engulfed by Covid-19.

The African Population Health Research Centre, based in Kenya, has been mining data across 47 countries in Africa, tracking differences in Covid-19 ...
News
1 year ago

Since about 90% of these health and care workers are women in SA, it behoves us on this year’s International Working Women’s Day that we elevate into sharper focus the plight and challenges afflicting women workers in health and care work, in particular the nurses and CHWs. We must do so also because in the wake of the tabling of the 2021 budget by the minister of finance, Tito Mboweni, as ever these workers as part of the broader cadre of the public service, have been subjected to sustained and virulent abuses by neoliberal deplorables in government and the mainstream commentariat.

This elite has contrived to manufacture a consensus on the public service wage bill to shift the focus away from the more than R500bn that has been looted or laid to waste in corrupt deals between the government and private sector, involving senior officials, SOE executives and politicians on the one hand and infrastructure contractors, outsourcing companies and accounting firms on the other.

In the meantime, the lavish pay and benefits pertaining to those at the higher echelons of government, as politicians, judges, traditional leaders, executives and managers of entities, etc. which are drawn from the same fiscus, is shrouded by the stridden elite narrative of the bloated public service wage bill. The auditor-general has been exposing the prevalent abject state of public finance management year after year to no avail. Yet since the first budget of the fifth administration presented by Pravin Gordhan in 2015, the narrative of a runaway public wage bill has been routinely peddled while the formulaic economic policies continue to put the economy on a downward spiral through austerity measures.

SA hits vaccine milestone as 100,000 shots have now been administered

A simple logic is deliberately evaded, that if national output remains stagnant over such a protracted period, fixed allocations such as the compensation of employees are invariably going to inversely rise as a proportion of spending, amid declining revenue. Similarly, the debt-service costs, budget-deficit and the debt-burden itself are going to rise in inverse proportion to the contracting output so long as the superstition that reducing aggregate demand somehow leads to economic growth prevails.

Total public-health spending contracted to a negligible average of 1.8% growth rate between 2012/13 and 2019/20, hence the Covid-19 epidemic laid bare the fragility of the public health-care system, in which in fact in the Eastern Cape it was overran. As if this is not enough, over the medium-term public health is set to be subjected to at least about a 6% budget cut unfortunately, which has chilling implications when taking into account the other draconian austerity measures that the Treasury announced.

The sixth administration of the ANC seeks to impose a wage freeze, measures to reduce headcounts, freeze certain posts, reverse pay-progression and occupation-specific dispensation as well as abolish some allowances and benefits. It is a cynical irony that the occupation-specific dispensations which was an initiative of government itself from 2007 amid the exodus of professionals because of poor pay and working conditions in the public service is now blamed on the health-care workers and other professionals.

On the other hand, amid these shocking cuts on vital items in public health spending, Treasury is increasing allocations for consultants and outsourcing companies by 33% and 20% in public health spending over the medium-term. This is likely to be replicated in other departments and SOEs that are also now dependent on the same fiscus for their operations.

Tragically, all of these austerity measures are going to severely impinge upon the livelihoods and the already dreadful working conditions experienced by nurses, doctors and other professionals in public health. This also means the intensification of psychological distress and further devastation on their wellbeing, of which many of the women are single parents, highly indebted and are overwhelmed by unpaid household drudgeries.

The WHO has recently found a 23% prevalence of depression and anxiety, and 39% prevalence of insomnia during Covid-19 among health-care professionals in 84 member states. In the SA public health sector, the prevalence of these conditions is bound to be severe and more so among CHWs who are often exposed to violence, rape and lack of transportation while eking out a survivalist livelihood.

Women gained legal rights in nearly 30 countries last year despite disruption due to Covid-19, but governments must do more to ease the ...
Lifestyle
1 year ago

The CHWs are an epitome of super-exploitation of semi-skilled labour, intersecting with gender and race, perpetrated by a neoliberal regime. The government espouses that the foundation of the envisaged universal health coverage in terms of the National Health Insurance policy, is primary health care, in which the CHWs would be at the centre. Despite the adoption of the policy for nearly a decade now, these largely women workers remain precariously linked to the public health-care system through casualised contracts or externalised to the non-governmental organisations without any benefits and paid “stipends” that are generally even worse than the current starvation national minimum wage.

Yet like nurses, many of the CHWs are already above 40 years and are subjected to long hours standing and walking while at the same time working well above the minimum hours required in terms of Basic Condition of Employment Act.

In declaring 2021 as the International Year of Health and Care Workers, the WHO is calling on governments to “protect our health and care workers” and “investment in people who invest in us”. In this regard, based on the set out fiscal policy over the medium-term, the SA government pivoted itself on a reactionary path, diametrically opposite to the course towards the realisation of the Sustainable Development Goals, especially goals 3, 5, 8; not least at the expense of working and unemployed women of this country.

Officials are ready to execute the extension of the special R350 Covid-19 grant by another three months.
News
1 year ago

However, this should hardly be surprising as already in 2018, under the UN’ Economic and Social Council the SA neoliberal regime has been called out. The 58th meeting of the Committee on Economic, Social and Cultural Rights adopted a report on the concluding observations on SA, which the ANC government continues to ignore. Among others, the committee stated the following to SA:

Our acute triple crises of unemployment, poverty and inequalities are largely borne by the broad shoulders of the working and unemployed women of SA, amid a fragmented and inadequate system of social protection.

In a deeply patriarchal society such as ours, reinforced by class and gender oppressions, it is no surprise that however much invaluable an occupation might be socioeconomically, if it is predominated by women such as in the health and care work of nurses and CHWs, the exploitation is intense

KZN government to extend contracts of over 10,000 health workers

Premier Sihle Zikalala said the health-care workers who were hired by the KZN government last year have helped reduce the death rate among Covid-19 ...
News
1 year ago

Health-care workers honoured for their contribution in fight against Covid

Health minister Dr Zweli Mkhize has thanked nurses for their contribution in the fight against Covid-19.
News
1 year ago

The virus has brought to the fore the unacceptable belief that the lives of those with disabilities are less valuable, writes Lauren den Besten.
Opinion & Analysis
1 year ago