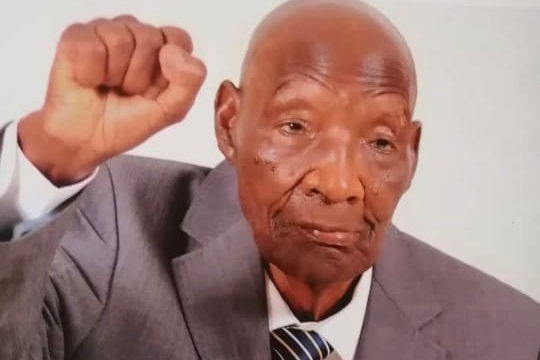 Pandelani Makhado's passing brings to a close 67 years of sustained activism. He and his generation embody multiple lessons for the present era into the future, says the author.
Image: Supplied

One of the few remaining leaders of the 1960 anti-pass campaign, the veteran political activist Pandelani Jonathan Mudziwa Makhado, has died.

One year shy of 100, Makhado’s passing last Thursday brings to a close 67 years of sustained activism which, like that of many of his contemporaries, had its genesis in the anti-colonial struggles of the first half of the 20th century and climaxed with the official end of apartheid in April 1994.

Current and future generations will harvest the fruits of Makhado and his generation’s labours to the extent that they draw appropriate lessons from such lodestars of yesteryear.

He became one of the go-to people for dispatching people to exile. Later he established a soccer team named Arsenal which served as a cover for his underground activities

But first, who was he and what is his place in history?

In an interview with the SA Democracy Education Trust (Sadet) in July 2001, Makhado notably recalled resistance to the “betterment schemes,” which followed the passage of the 1936 Land Act when he was still in the morning of his life. The schemes were intended further to entrench colonial land dispossession and the subjugation of the black majority.

Like other patriotic traditional leaders throughout the country, Paramount Chief Rasimphi Tshivhase “rejected the plan and mounted resistance against [the schemes]. It was also said we should not plough near riverbanks”.

Makhado’s village of Ha-Raḓali forms part of Tshivhase’s jurisdiction. For this reason, his parents internalised and effected Tshivhase’s instructions to “remove all barriers set up by the Bantu authorities”.

Ultimately, “the system never worked in Sibasa district. People refused to reduce the number of their stock or livestock and continued to plough their fields as before. My father kept his animals too”.

A 1989 paper by then Rhodes University academic PA McAllister notes: “In most areas where attempts were made to implement these schemes, resistance was encountered from the people affected who came to associate the schemes with loss of livestock (through culling), restrictions on the use of grazing, and reductions in the availability of arable land. In the 1950s and 1960s, resistance to betterment became interwoven with resistance to the implementation of the Bantu Authorities Act.”

Consistent with the political economy objectives of the 1913 Land Act, the betterment schemes gave further impetus to the proletarianisation of peasant society through accelerated labour migration from the countryside into the urban areas.

He found work at the Parkview Golf Club as a caddie and stayed at the club’s premises, where conditions were only just hospitable.

Makhado’s words: “We lived in large compounds that accommodated more than 20 people in one hall. We slept on wired beds with no mattress. We were fed dry porridge which we ate because there was nothing else to eat.”

Joining the ANC, parting ways with the shrine of ignorance

Resistance to the betterment schemes firmly embossed in his consciousness, the racial and class exploitation he encountered as a black and working person and an inquisitive mind which hungered for knowledge and self-affirmation, he joined theANC in 1954.

Then living in Alexandra township, Makhado began to attend ANC meetings “because they spoke about the freedom of our country. That fascinated me”.

Additionally, the lingua franca of ANC meetings was English, “the language that I so much wanted to know. I said to myself, ‘I will grab a little here’.”

He had left school in grade 2 after sustaining an injury during a running contest with a friend in the school grounds. The swelling from the injury took long to heal and led to him dropping out of school.

Makhado came to see English as a vehicle to vistas of knowledge the unfortunate incident had conspired to deny him.

Makhado came to see English as a vehicle to vistas of knowledge the unfortunate incident had conspired to deny him.

By 1942 he had begun buying and reading newspapers like The Star and the Rand Daily Mail, which he read “with no understanding”. Later, he would purchase a dictionary “which taught me a few things”. Whatever else he did not understand, he sought clarity from those he trusted.

“I wanted to be up to date with what was going on. I also wanted to learn English. I used to befriend people who could speak English well.”

Soon after settling in Alexandra, Makhado and some friends enrolled at a night school run by the erstwhile Communist Party of SA (CPSA) in Third Avenue.

“We all liked school and wanted to further our education.”

The first day at the school must have been as fascinating as talk of freedom in ANC meetings was for Makhado.

An initiate of the generation of activists that came closely after Makhado and which was itself also not formally educated, former safety and security minister Sydney Mufamadi, has noted: “The ANC is the one organisation that taught us not to worship at the shrine of ignorance.”

Premier Alan Winde wrote to Ramaphosa on Tuesday after receiving a request from Esau's family.
Politics
5 months ago

But Makhado’s thirst for knowledge was not about to be quenched. On June 26 1950, the apartheid parliament passed the Suppression of Communism Act which outlawed the CPSA. The rooi gevaar (red danger) legislation came into force three weeks later on July 17.

When Makhado and his fellow students returned to class on the second day, they found the school closed.

Half a century later, in 2001, his disappointment at the school’s closure was still palpable.

He told Sadet: “There were posters saying the Communist Party had been banned. My heart was sore because I had just found a chance to educate myself; now this. Maybe today I would be a better-educated person because that Communist Party school helped many people. There are people who became powerful activists because of the education they received from CPSA night schools. Some went as far as matriculation. That was a blow to many of us.”

Makhado and his generation embody multiple lessons for the present era into the future.

Makhado soon got involved in the formation of residents committees in Chiawelo and the neighbourhood. He also served as campaign manager for candidates for the 1958 Native Advisory Board — structures intended to manage political grievances by providing a semblance of political representation — elections. Impressed by his organising skills, the ANC in Soweto approached Makhado to join its local structures.

In 2001, he said of that encounter: “They (ANC) said: ‘We have come to you because we have seen your work. You need to be in politics. You should work with us. We are members of [the] ANC.’ To which “I responded, ‘For the ANC, I am available’.”

He became the liaison between his branch and Makhosa House, the ANC’s then headquarters in Commissioner Street, Johannesburg. Alongside “Expensive Joe”, a nickname he earned for his smart dress code, he came to be known, in ANC circles, as “The Contact”.

The Sharpeville massacre of March 1960 sucked Makhado ever deeper into political activity.

“In Tshiawelo, I was the leader in burning people’s passbooks.”

Notwithstanding ANC president Chief Albert Luthuli’s call for people to burn the “obnoxious” passbooks “in an orderly manner”, Makhado acknowledged in the 2001 Sadet interview: “We took passbooks from people by force and we burnt them  because this passbook was evil. Even today, people still point at me and say, ‘This is the guy who burnt our passbooks’.”

The banning of political organisations which followed the massacre also drove Makhado into underground activity. He had wanted to become a full time Umkhonto we Sizwe (MK) operative but “unfortunately, I was a sick[ly] person by that time”.

He nonetheless became part of an MK cell which manufactured explosives for a brief while after the military wing’s formation.

“We used to make bombs from chemicals. Johannes Ngwenya and I used to mix them at home when my wife was in town.”

I have spent most of the week in a fog of endless and likely excessive consumption of news coverage of what was referred to as "the insurrection", ...
Opinion & Analysis
1 month ago

Although the police raided his house after a tip-off, they did not find any incriminating evidence.

He became one of the go-to people for dispatching people to exile. Later, he established a soccer team named Arsenal which served as a cover for his underground activities. The plan worked because, save for 1958, he was only ever detained for 24 hours.

Makhado and his generation embody multiple lessons for the present era into the future. In his honour and in their own interest, the generations that follow should advisedly ponder over the lessons as they journey into the future.

In addition to his aversion to the shrine of ignorance, Makhado himself succinctly expressed perhaps one of the cardinal lessons when he spoke about the 1957 Alexandra bus boycott.

“We walked on foot from Alexandra to the city in the morning and walked back in the evening, even when it was raining. We reached our homes soaked by the rain because we were doing what we were supposed to do.”

He thus approached his political work with the same commitment and zeal with which he sought his continuous personal development. He understood and approached the tasks of his day not as an option but an obligation.

In this way, Makhado was a product of history inasmuch as he was its maker. Of greater significance is that he could only make history in an organisational setting which had the intellectual, political, moral and other attributes that were stern enough to defeat the apartheid monstrosity.

If Makhado joined the ANC in 1954 because he was “fascinated” by talk of freedom, it must follow that those who claim loyalty to the cause for which he stood are challenged to renew their commitment to the construction of a nonracial, non-sexist, democratic and prosperous society — one which repudiates poverty and underdevelopment — in ways that are as fascinating as they are obligatory.

She put up her hand and said ‘I will go’: forgotten tales of SA resistance

A new book, ‘ALL RISE: Resistance and Rebellion in South Africa (1910-1948)’,  unearths stories of brave South Africans
Lifestyle
2 months ago

The step-aside policy crisis: A case of déjà vu for the ANC?

Looking back at the events the ANC has experienced since it was founded in 1912, the current crisis and factional conflicts, largely caused by how ...
Ideas
4 months ago

Legendary photographer Peter Magubane is focusing on a different subject these days  after decades of being on the frontlines of  SA’s battle against ...
News
4 months ago