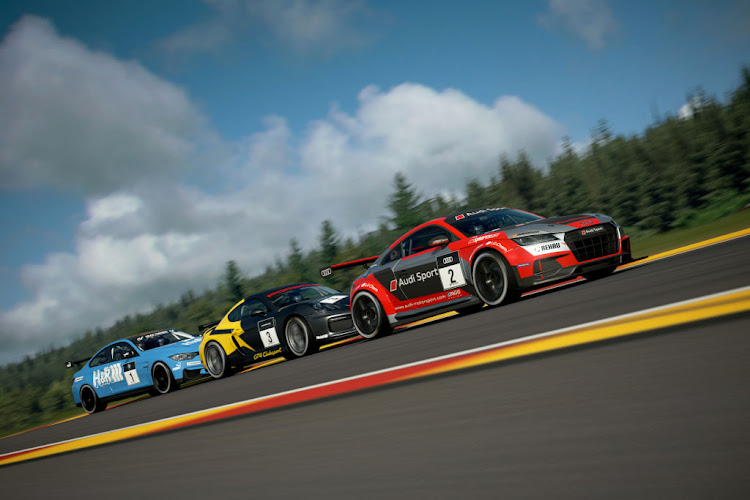 A screen-grab taken from Polyphony's Gran Turismo Sport. This is one of the best racing sims to gain access to easy online competition.
Image: Clive Rose - Gran Turismo/Gran Turismo via Getty Images

Being stuck at home for 21 days isn't necessarily a bad thing — especially if you have been itching to dip into the exciting world of sim racing. And why not: professional motorsport series like Formula 1 and the Porsche Mobil 1 Supercup — to name but a few — are all going the virtual route until travel bans are lifted and drivers are allowed to hit the grid again.

So whether you own a PC, PlayStation or Xbox, here are five simulators worth test-driving over the next few weeks. Though all of them are designed to work best with a proper racing wheel and pedals set-up, you can get by using a gamepad or (gasp) even a keyboard.

The product of Kunos Simulazioni, 2014's Assetto Corsa (Italian for 'Race Set-up' in case you were wondering) has been praised for its sharp visuals, super realistic engine noises and superb handling characteristics. It's popular too, with a strong online community that ensures you will always find somebody to race. Heightening its appeal is plenty of downloadable content so you can grow the amount of cars and tracks at your disposal.

When Dirt Rally 2.0 was released by Codemasters in 2019 it was heralded as one of the best rally racing sims on the market. Those in the know raved about its physics as well as the way cars drove and handled across the varying stage surfaces (mud, sand, snow and asphalt). It's perhaps not the easiest of sims to master (features like surface degradation and decreased visibility due to poor weather make your life even tougher) but once you do you will be rewarded with a visceral thrill-ride that will keep you coming back for more.

Considered by many to be the holy grail of racing sims, Motorsport Simulation's iRacing is the professional's choice thanks to its hyperrealistic physics and incredibly accurate track mapping. Indeed, this is the place where drivers such as SA's ADAC GT Masters champion Kelvin van der Linde come to hone their skills and race against the likes of Max Verstappen and Lando Norris. The rules are strict, the racing relentless and the capital outlay ongoing — you have to pay a monthly subscription fee for the privilege. Yep, suffice to say that iRacing is not for the faint of heart nor racing sim newbies.

Developed by Slightly Mad Studios, Project Cars 2 launched in 2017 and offers a rich and incredibly diverse array of cars, tracks and locations to help keep you entertained. From IndyCar and NASCAR right through to prototypes and rallycross, this simulator has pretty much all your needs covered. Personally we're big fans of the historic content — what could be better than piloting a 1987 Porsche 962 Group C car down the old Circuit de la Sarthe (you know, before they put any of those silly chicanes down the Mulsanne straight).

When played online you can build up your 'Competitive Racing License:' a ranking system that automatically tracks and builds your Seniority, Racecraft, and Skill​ via an enhanced Elo-based rating system. The better your perform the more skilled your opponents will be.

We're just scratching the surface here but Project Cars 2 goes deep and its strong online community and enviable eSports affiliation has the possibility to take you places.

From a 'get-in-and-go' perspective Polyphony's Gran Turismo Sport (2017) is perhaps the simplest and most accessible way to enter the addictive world of online sim racing. A simple ranking system ensures fair but close competition with other drivers while a well-sorted physics engine guarantees a realistic experience whenever ensconced 'behind the wheel' of your favourite racing car. Though the engine sounds and graphics could be better (so too could the variety of cars), few other racing simulators offer the same ease of use. It's definitely the title to choose if you're looking at giving online competition a whirl.

Covid-19 lockdown got you down? Then best you head on over to YouTube where you can watch "Endurance", a brand new 90-minute documentary about how ...
Motoring
1 year ago