As coronavirus empties streets, speeders put pedal to the metal 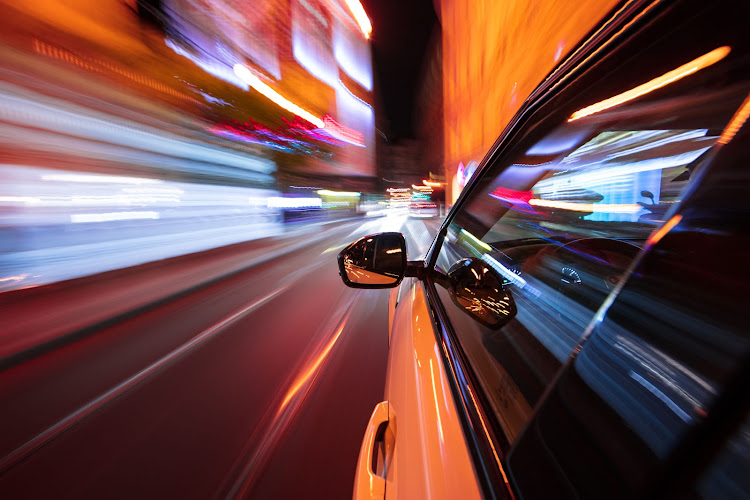 Quiet streets caused by lockdowns and social distancing are being taken advantage of speeders in the US and Europe.
Image: 123rf / Lukas Gojda

Empty roads in the US and Europe are tempting drivers to go out and shift into high gear.

From Los Angeles to New York, London and Berlin, coronavirus lockdowns have drained traffic from normally crowded roads. That has opened space for drivers who want to defy police warnings and automated traffic enforcement systems to go racing in the streets. In London and Los Angeles, police said they have clocked drivers zooming down streets at over 160km/h.

Drivers are posting videos on social media to boast of races on empty roads in Mexico and the US states of Arizona and Texas. In addition to the thrill of speeding, some drivers overestimate their abilities and falsely believe that empty roads provide safety, according to police officials.

Vehicle miles travelled, a standard industry metric to measure vehicle volume and trip distances, has dropped in every US county as of early April, according to data by StreetLight Data, a transportation analytics firm. 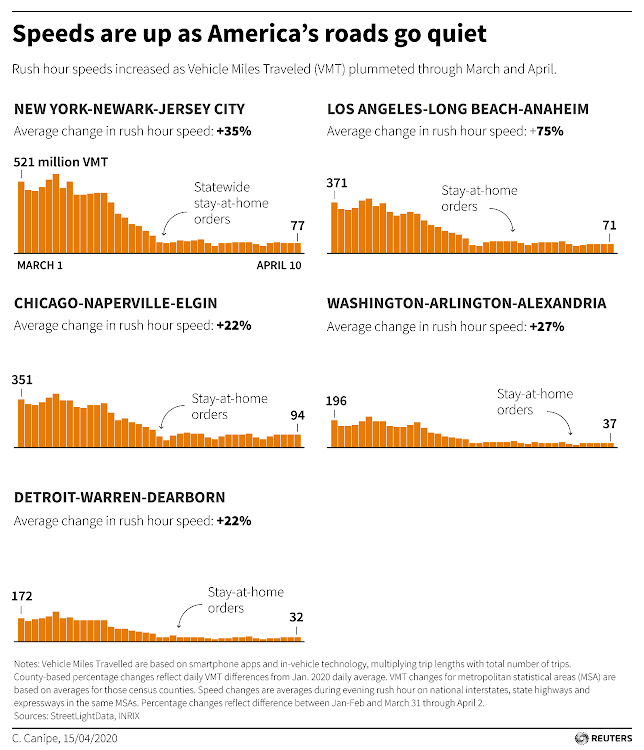 Speeds are up as America's roads go quiet
Image: Reuters

At the same time, average speeds measured during the first week of April increased significantly in the five largest US metropolitan areas.

According to data by transportation analytics firm INRIX, the average speed on interstate highways, state highways and expressways in those areas increased by as much as 75% compared to January and February and somewhat or at times significantly exceeded the speed limit.

INRIX transportation analyst Bob Pishue said drivers in some US cities were seizing upon what they see as a once-in-a-lifetime chance to increase speed. “It is unprecedented,” he said.

In New York City, transportation officials reported an increase of more than 60% in the amount of speed camera tickets issued in March compared with the year-ago period. Preliminary city data suggests a similar trend for the first week of April. At the same time, traffic was down more than 90% compared with January in Manhattan, the city's central borough.

On Bruckner Boulevard in the city's Bronx borough, a road with a 30mph (50km/h) speed limit that made up a large share of speeding camera tickets, 5% of drivers travelled faster than 43mph (70km/h) in the first week of April, according to INRIX data.

In Washington, DC, where traffic has decreased some 80% in March compared with January, according to StreetLight Data, officials have recorded a 20% jump in March speeding tickets. Of those, violations issued for driving 21-25mph (34 to 40km/h) over the speed limit rose by nearly 40%.

Meanwhile, California Highway Patrol officials in Los Angeles have taken to Twitter, urging road users to slow down by posting images of rollover crashes and wrecked vehicles due to speeding on a nearly daily basis.

The Los Angeles Police Department said it is redeploying its resources, establishing a high-speed street task force to position officers at strategic roads. The city has also changed its traffic signals sequence to avoid long stretches of green lights.

“Even though significantly fewer people are driving, the people that are out there are putting vulnerable road users at higher risk,” said David Ferry, a lieutenant in the traffic co-ordination section of the LAPD.

Ferry pointed to LAPD data showing that while collisions and fatalities decreased significantly overall in March, severe collisions were declining at a lower rate.

Police officials in Europe are witnessing a similar trend.

London police on Tuesday released a video showing a driver speeding at 150mph (240km/h) and officials said speeds on some roads had nearly doubled over the weekend with some drivers taking advantage of empty roads.

In Germany, police officials in the western state of North Rhine-Westphalia, said about 30% of all vehicles exceeded speed limits in March — compared with roughly 5-8% in a regular year.

Stefan Pfeiffer, a marshal with the Bavarian police in Southern Germany, said drivers were tempted by the false sense of safety conveyed by empty roads and warmer weather was luring inexperienced motorcycle riders.

“While traffic safety presumably increases as fewer people are on the road, individual drivers worsen the situation with their irresponsible and at times completely reckless behaviour,” Pfeiffer said.

Harley-Davidson Inc said on Wednesday it had temporarily laid off most of its global production employees and implemented salary cuts in a bid to ...
Motoring
1 year ago

The Covid-19 crisis is a final wake-up call for an already 'unhealthy' Formula One, which risks losing teams unless drastic changes are made, McLaren ...
Motoring
1 year ago

Nissan Motor Co Ltd's management has become convinced the struggling car maker needs to be much smaller and a restructuring plan due out next month ...
Motoring
1 year ago