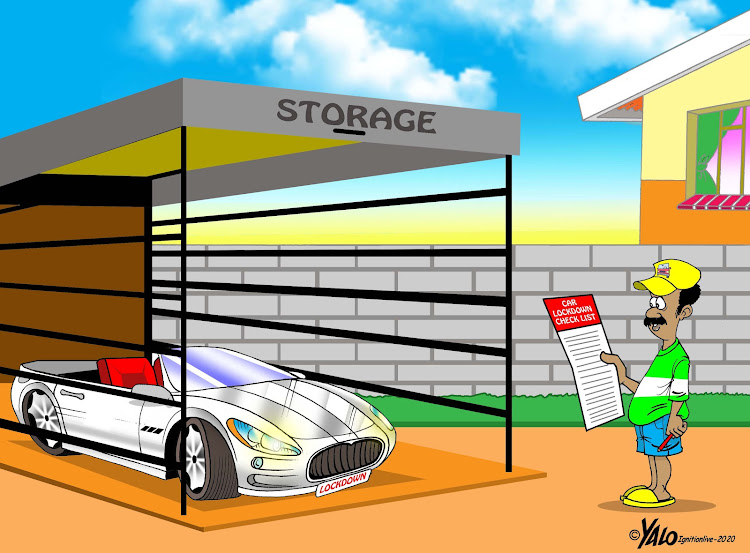 Some simple checks and tasks can help keep your car running smoothly over the lockdown period.
Image: Supplied

For weeks on end now the family chariot has been looking at you quizzically each time you walk past. What's going on? When are we going for a decent spin again? Well, it seems there's a glimmer of light at the end of the tunnel, so perhaps we can turn our thoughts to the happy day when we will be rolling once more.

Being laid up is never good for a car, but if it's only for a short while, as will hopefully be the case in the present time of stricture, not much harm can come of it. If it's for longer periods - more than three months, say - special measures are required to limit the detriment, as we will discuss below.

The main items of concern after a relatively short spell of inactivity are:

A battery in good condition, fully charged at the outset, should remain serviceable for two weeks. The ideal is to put it on a mains-powered “smart” charger that will keep it charged without overcharging it. But smart chargers are expensive, so for periods of longer than two weeks, or in the case of a battery that was on shaky legs to begin with, it is advisable to start the engine at least once every fortnight, and let it run at a fast idle for a minimum of 15 minutes so that the alternator can recharge the battery. Do this outside to avoid carbon monoxide build-up. Never leave the car unattended with the engine running.

If the handbrake was applied when the car was parked, and especially in damp conditions, it's possible that the brakes can seize. To prevent this, release the handbrake and roll the car back and forth a few times during the battery charging operations. When setting out on your first trip after the interlude, make sure to use the brakes (gently!) during the first few kilometres to clean off any corrosion that may have formed.

Tyres slowly lose pressure, even when stationary. Check the tyre pressures before going back on the road, or as soon as possible thereafter.

If an engine hasn't run for a couple of weeks, the oil will have drained away from bearings and the valvetrain. Though high-quality oil is supposed to be able to cope with this situation, it can do no harm to disable the ignition (on a petrol-engine car) and crank the engine on the starter motor for a few bursts of 10 seconds at a time, to pump some oil where it's needed. The only caveat here is that on modern cars with electronic engine control, disabling the ignition is fraught with danger. Unless you are sure what to do, rather leave alone.

For longer periods of storage, it's recommended that you fill the fuel tank before laying up the vehicle. This will minimise the volume of air in the tank, hence the amount of condensation of water vapour in the air. Water in the fuel tank is always bad news.

Remember also that the most serious concern during lengthy storage is corrosion of the bodywork. Ensure that adequate ventilation is provided, and that the car is put away dry after having been given a good wash and polish.

Put the vehicle on supporting stands to lift the tyres off the ground and rotate the wheels periodically to spread the bearing grease. This is also important for caravans and trailers used seasonally.

Emblems 101: How Alfa Romeo got its mojo

Alfa Romeo is a brand with pedigree. It's been around for 110 years and therefore has a history behind it that comparatively young brands like ...
Motoring
2 years ago

Tracker reveals whether motorists have kept to lockdown rules

In an effort to fight the Covid-19 pandemic, South Africa entered a 21-day national lockdown at midnight on March 26 2020. But have our citizens ...
Motoring
2 years ago

10 quintessential hot hatchbacks you want to own

Who doesn't enjoy a well-fettled hot-hatch? Fun, practical and most of the time easy to run and maintain, it's not hard to see why they are still ...
Motoring
2 years ago