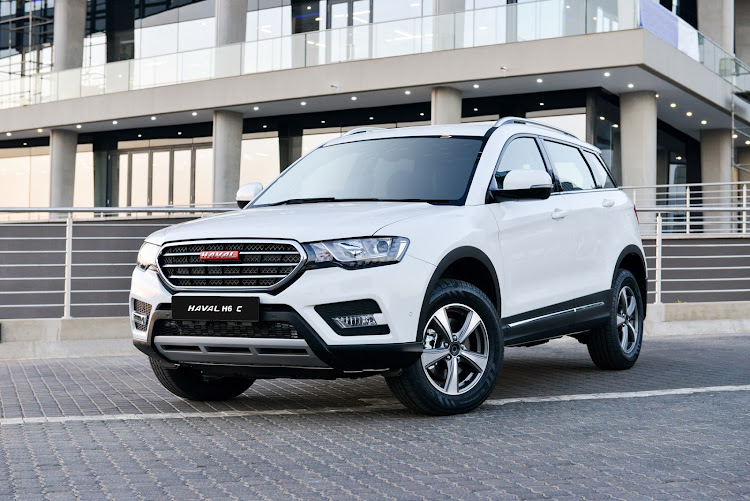 Local Haval owners have experienced issues with the brakes on their H6 and H6C SUVs.
Image: Supplied

According to Haval H6 owner Lizelle Correia, these misfortunes defined her experience with the vehicle. She purchased the model new in August 2017, with “just over 100km” on the odometer, from the Haval Hatfield dealership.

Soon after, she said the radio had begun to exhibit defects, “freezing in Chinese” or not responding to input and the front windscreen wipers developed a shudder — Correia claims she was told she had been “overreacting”. The radio was replaced, but further faults began to emerge - necessitating replacement of the instrument cluster that had stopped working, as well as the lighter socket, which she used as a charging point.

“During that time, they also damaged and dented my car,” she told TimesLIVE Motoring. The dealership informed her it would send the vehicle to be repaired. During the first quarter of 2018, after her H6 received its sixth radio, Correia opted to seek a replacement vehicle in terms of Section 56 of the Consumer Protection Act (CPA) of 2008, which allows for the right to return a product within six months from the date of sale.

The supplier is obliged to either “repair or replace the failed, unsafe or defective goods” or “refund to the consumer the price paid by the consumer for the goods.”

Initially, her request was met with refusal. After Correia expressed her intention to pursue legal action, the dealership eventually obliged and on April 10 2019 she was told to collect her replacement H6.

Join Ignition TV presenter Brenwin Naidu as he conducts a battle royale between the BMW M135i and Mercedes-AMG A35 — premium hatchbacks with the ...
Motoring
1 year ago

Although displeased with certain aspects of the condition of the replacement car, such as the bubbling window tint and marks on the body, she accepted delivery. Six days later, its radio also began to glitch. A noise emanating from the left rear wheel prompted a return to the dealership, where a workshop technician found a rubber fixture in the tailgate required tightening. Correia said complaints about steering wheel shudder under braking had been ignored.

On July 10 2019, Correia contacted Haval Motors SA (HMSA) customer care with her story, including the surfacing of a new issue relating to the gearbox. She was advised to contact a dealer for an inspection of the transmission. The e-mail response from the carmaker also stated: “We have contacted the new owner of your previous vehicle and confirmed they are not experiencing any of the issues that you had with your vehicle.”

The correspondence concluded by advising Correia to pursue recourse with the Motor Industry Ombudsman (MIO) should she remain unsatisfied.

That November, the H6 was due for a service. Correia asked her fiancé to take the vehicle in as she “was banned at Hatfield by the dealer principal”.

Correia said the vehicle still shuddered under braking, which she demonstrated to the technician on a freeway drive in January 2020. The vehicle was placed on a lift, where it was revealed the rear and front brakes needed attention. She was told she would have to pay out of her own pocket.

“We also heard it is due to our weight that the brakes are done,” she said, further being told “they did not have stock of the brakes”.

“A week later, myself and my family were in a car accident at which the brakes on my car did not work at all.”

Pictures submitted indicate cosmetic damage on the rear left side.

The next day, Correia went to the Hatfield service centre and was told to leave. She took the H6 to the Haval Gezina branch instead. The left and right rear hubs needed replacement and had ostensibly been the cause of the shudder.

A meeting at the Gezina dealership with representation from head office followed, after which another meeting at the Sandton headquarters of the brand took place on February 17. Correia said the promises made at these meetings have yet to materialise.

Responding to the allegation of brake failure this week, HMSA said: “We have not seen an accident report or collision expert’s report so we cannot comment on this, however, having regard to the safety standards met on Haval vehicles, it’s improbable any inherent defect caused the alleged collision.

“The dealership advised the owner that the wear-and-tear was likely a result of overloading of the vehicle.

“Whilst the dealer has confirmed that the condition of the brake pads was not unsafe, the owner was advised that if she continued to drive with them, they would soon reach a stage when they would become hazardous and the situation must not be ignored.”

“With over three million Haval H6 and H6C sold all over the world, if there were any quality or safety issues with these vehicles, we would be aware of this and the necessary action immediately taken.”

Rashaad Jeffrey purchased a new H6C from Haval Centurion on June 5 2019. A month later, he addressed a list of complaints to the dealership - among which was a shudder from the right front wheel under braking, as well as ineffective headlights, a rattling tailgate, faulty tyre pressure monitor and lag in power delivery.

After being dissatisfied with the response from the retailer, he escalated the matter to HMSA.

The fitment of new discs and pads did not remedy the shuddering. Jeffrey described an instance where, during a trip to Johannesburg, he attempted to evade an object on the road: “Upon braking, the brakes completely failed to hold the vehicle with myself, my wife and my kids in the car.”

At the 15,000km service interval, the brakes were replaced again under warranty. On September 21 2019, the braking system was replaced yet again.

“On a different occasion, I was travelling to Bloemfontein, during a serious storm, when my windscreen wipers suddenly stopped working.”

Following a 30,000km service, he complained the glovebox of the H6C refused to close. The cause was found to be a loose pollen filter creating an obstruction.

“While in Durban, the boot lid actuator malfunctioned, and the boot lid would not open for 10 days. During this time I [had] to access our luggage through the back seats.”

Concerns about rust were added to his list. Transmission stickiness was another gripe. He created a Facebook page to voice his grievances with the product.

“It was acknowledged in the meeting that Haval would like for me to close down my Facebook page and in return they will have my brakes replaced, but this time with a Ferodo braking system designed for South African roads. They acknowledged that the brakes that the vehicle [are] designed with are meant for slower driving and designed in accordance with Chinese driving styles, and not suited for South African driving styles,” he said.

“It was at this meeting that they offered to replace my entire vehicle if I was prepared to delete my Facebook page. I then asked for a few days to advise them on a resolution that I would be satisfied with.”

He said he wanted to be upgraded to the larger H9 as he had lost confidence in the safety of the H6C. The company did not respond.

Later that month, the vehicle was due for its 45,000km service. He was denied patronage at Haval Centurion and was advised to take the vehicle to a different branch, so he went to Haval Springs.

Join 'Ignition TV' presenter Brenwin Naidu for a test drive in the recently facelifted Haval H2: a car that is doing surprisingly well in the South ...
Motoring
1 year ago

At the end of February, Haval called him to again discuss the prospect of a replacement vehicle. After an evaluation and a test drive of an H6C with an automatic transmission, he was promised the company would get in touch about finalising the process.

He was then told that since his Facebook page still existed, negotiations for the replacement vehicle were proving difficult. Jeffrey then suspended the account. He contacted Haval on March 14, asking if the replacement car was ready, or if the company would take their vehicle back and reimburse him.

“The answer was ‘no’ to both questions, so the meeting was adjourned and no communication has been received since.”

Jeffrey also lodged an inquiry with the National Regulator for Compulsory Specifications (NRCS), calling for an investigation into the certification of the braking systems in the range of Haval vehicles.

On April 2, Dries van Tonder, technical specialist in the automotive division of the regulatory body, acknowledged receipt of the complaint, but said Covid-19 lockdown regulations had affected activity.

On May 6, Van Tonder said investigations would not be active, possibly even when level 2 of the phased lockdown arrived. “Therefore kindly note that the matter is for now still in its initial state, which indicates that we have acknowledged the receipt of your complaint and it will be on our list to do as soon as we are back at office.”

On May 18, Jeffrey’s legal representation issued a letter of demand to HMSA, which included additional concerns.

The brand responded to a request for comment on Monday by saying its response to Jeffrey’s letter was being dealt with by the firm’s attorneys.

“All Haval vehicles, including the H6 and H6C, have met strict requirements and compulsory specifications regulated by the NRCS and are approved by them prior to their distribution and sale to the public,” it said.

“All Haval vehicles have met every quality and safety regulation set by all the countries in which they are sold and driven.”

The company said it would be happy to comply with investigations should they be undertaken.

It added that apart from developments in a correspondence on May 17 regarding the air conditioner, electric windows and fuel consumption, other concerns had been reported by the owner and the company had “always responded to the owners ’concerns as soon as they are brought to our attention, and will continue to do so”.

“The allegation by [both owners] that HMSA does not respond to them or has acknowledged that Haval vehicle parts are defective is both untrue and unfortunate.”

The company dismissed Jeffrey’s claims of rust and gearbox issues, saying no follow-up visits to the dealer were made after the initial rust inspection and replacement of gearbox oil. It said brake pads and discs are treated as wear-and-tear items, with the replacement cost being for the account of the owner, unless a maintenance plan was purchased.

According to HMSA, “the wear-and-tear on the brake pads necessitating replacement was most likely attributable to the driving style and kilometrage travelled in the vehicle.”

It added that demands for an H9 replacement model, which purportedly has a market value R250,000 greater than Jeffrey’s, were unreasonable.

“Thereafter [the customer] refused to grant HMSA permission to perform technical tests on the vehicle’s brake pads or allow his vehicle to undergo a full diagnostic check. We repeat this request so that we can deal with all of his concerns.”

Consumer Watch features once monthly on the TimesLIVE Motoring platform. Contact the reporter via e-mail on brenwin@sundaytimes.co.za if you have a case to share.

Petrol and diesel to rise again after record reductions over the last two months, says AA
Motoring
1 year ago

The large print giveth and the small print taketh away. That line, penned by musician Tom Waits more than four decades ago, is particularly apt in ...
News
1 year ago