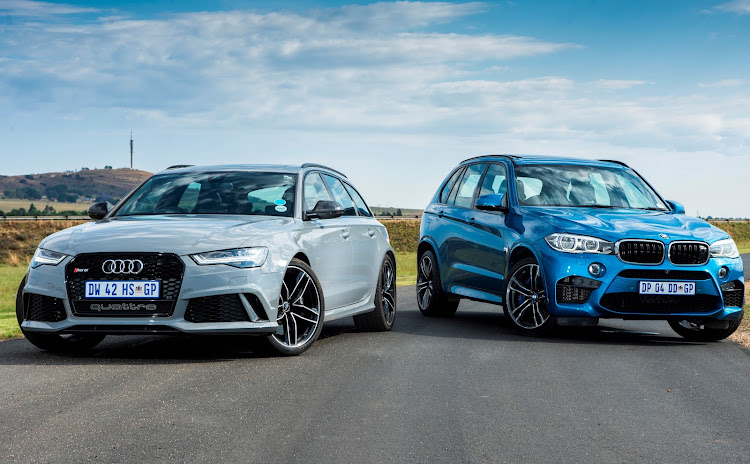 Join us as we take a gander back at some of our automotive endeavours from days gone by. This week, the time machine takes us to November 22 2015, when Brenwin Naidu and Lerato Matebese convened to discuss two practical family haulers with mean streaks.

We members of the motoring fourth estate take every opportunity to extol the virtues of the station wagon. And we are quick to cite the Europeans as bastions of pragmatism and intelligence since the genre does incredibly well on their continent. But then, when did they become the sole arbiters of good sense?

The SUV and crossover formats appear to represent solutions for challenges particular to our market. For starters, superior ground clearance makes the threat of poor road surfaces less intimidating – yes, yes, even though the truth of the matter is that rubber profiles are equally important in this scenario. One cannot ignore a commanding driving position that offers empowerment in the face of nuisances. Like wayward taxi drivers and peddlers of CrossFit pamphlets at Sandton traffic lights.

These standpoints formed the basis for an interesting comparison. If you are the type of buyer who yearns for practicality – but you do not want to relinquish performance – there are options to be considered. Gracing these pages is a German duo boasting over 400kW each, in addition to seating for five and ample Labrador and baggage hauling ability.

Since the wagon genre appears to fade into the periphery locally, we will begin with the model you are probably keenest to read about. The BMW X5M is indeed a veritable choice among government blue-light brigades and private sector high-flyers. 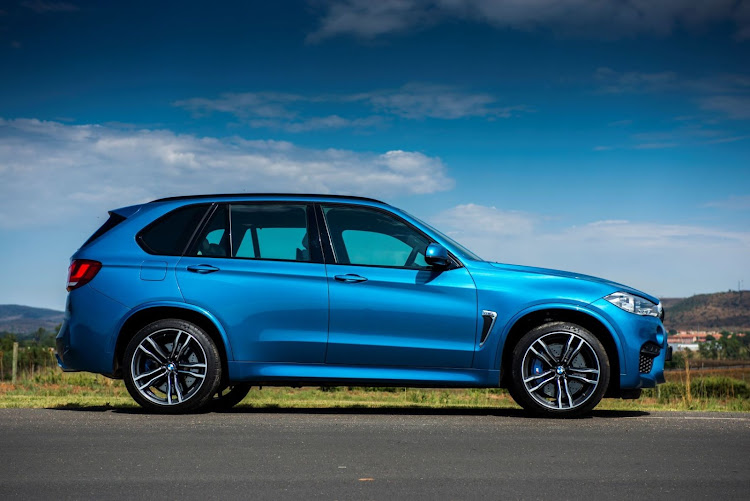 Sifting past the reputations established by its drivers, the X5M represents an incredible feat of engineering. A look at the numbers is enough to leave even the most jaded in awe. How is it possible that a hunk of metal over two tons can dash to 100km/h swifter than most hot hatchbacks? Brute force is the answer. The X5M makes a good example for those who claim that there is no replacement for displacement.

Flipping the calendar back a decade ago, BMW offered the X5 4.8is. The normally aspirated, eight-cylinder mill was good for 265kW and a sprint time of 6.1 seconds.

Fast-forward to the present F15 designation model; the manufacturer stuck to a cylindrical octet, albeit with the bonus of boost resulting in 423kW and 750Nm. Now the standstill to 100km/h time reads 4.2 seconds. It is indeed a beacon of progress. And the sensation it produces when the urge to stamp that throttle takes over is incredibly visceral.

Yes, you get the commensurate pace. You also get the impression that this car is grafting hard to disprove the physical parameters of mass and momentum enshrined in high school science textbooks. Perhaps it has something to do with that innate human attunement to the notion of self-preservation, but moving so fast in something so hefty feels unnatural. Incredibly exhilarating, but incredibly unnatural.

There is a trio of settings for the drivetrain, the suspension and steering, as we have become accustomed to in models fettled by the lab coats at BMW M. Comfort, Sport and Sport Plus cover the spectrum.

The best part is that you can pick and mix. Say for example you want the immense punch but not the rigid ride quality or overly weighted steering wheel. Such is the extent of the available settings. 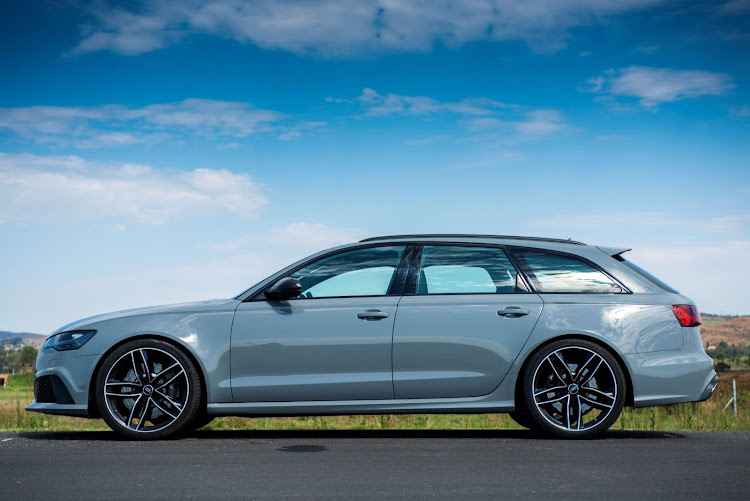 Alas, no electronic configurations can fully negate the effects of a higher centre of gravity. This is where enthusiasts will chime in, voicing support for the dynamically superior Audi RS6 Avant. There is something ineffably cool about a fast wagon. Volvo knows this. Subaru knew it too, back when the rallying aspect of its DNA crept into products like the Forester.

It is heartening to see that Audi is not shying away from a tradition created by the now iconic RS2 Avant spawned in the 1990s. While the Audi has (marginally) less power than the X5, it is swifter to 100km/h – managing to execute the dash in 3.9 seconds.

For some perspective, the McLaren 570S launched recently will get to triple digits in 3.2 seconds. Except the RS6 has about 15 times the cargo capacity. This is not hyperbole either; with the rear seats folded down it will swallow 1,680 litres of stuff. But the sensations, not the sterile figures, puts everything into perspective. The V8 engine sounds a great deal crisper than the unit in the BMW – a raspier tone in comparison to the primal grunting of its SUV counterpart.

Blipping the eight-speed transmission down as you approach a red traffic light is irresistible, because a crack of thunder emerges through the tailpipes. While it weighs less than the X5 (1,950kg vs 2,350kg), the RS6 still feels like a chunky machine. Do not be deluded into thinking it handles with the nimbleness of something like an S3.

As with its peer, one can feel the transfer in mass when chucking the car into corners with exuberance. Traction is never a concern with either, as both boast all-wheel drive – something you will never forget in the case of the Audi, with its Quattro stamp on the front.

I can tell you unequivocally that the impression from the power seat of the ground-hugging Audi is a lot more natural. It feels like a true sporting machine – one that just happens to feature accommodation for the contents of a small home. Mind you, that sporting feel means little when you find yourself on a shoddily surfaced piece of road, headed to your next holiday destination, when you might wish you had opted for the SUV instead.

That said, I take the Eurocentric stance: the mean wagon from Ingolstadt would be my choice. It makes (relative) economic sense too, given that it is considerably cheaper than the BMW. 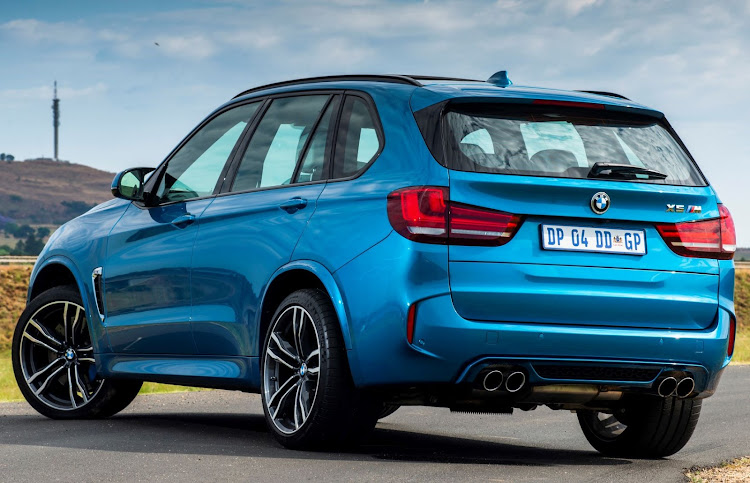 A bit like a tale of two cities, the war that rages on among the automotive German triumvirate that is Audi, BMW, and Mercedes-Benz, is well documented. Today we have two thirds of the trio - thus 'The duel of the titans' seems an apt sub-headline for this rambunctious octet of tailpipes on offer. As Brenwin has alluded above, there is no shortage of power or theatrics – and visual assault – with this pair.

The BMW X5M is somewhat of a misnomer, a straight mismatch if you will, as its inherent design defies its dynamic capabilities. It is a lumbering, towering giant that changes direction with verve more akin to a low slung, sports saloon. Granted, I might be pushing it somewhat there, but what the Munich brigade has achieved is deserving of the praise being heaped upon it.

That 4.4-litre twin turbo V8 has proven its muscle in both the M5 and M6, which are devastatingly fast projectiles. The X5M is no exception. It is quick, perhaps even bordering on the brink of obscenity, as it somehow leaves the driver sniggering at its capabilities, all the while dispensing with any would-be hot hatch. Alas, even with such an impressive sheet, it is not the one I would happily drive away in. 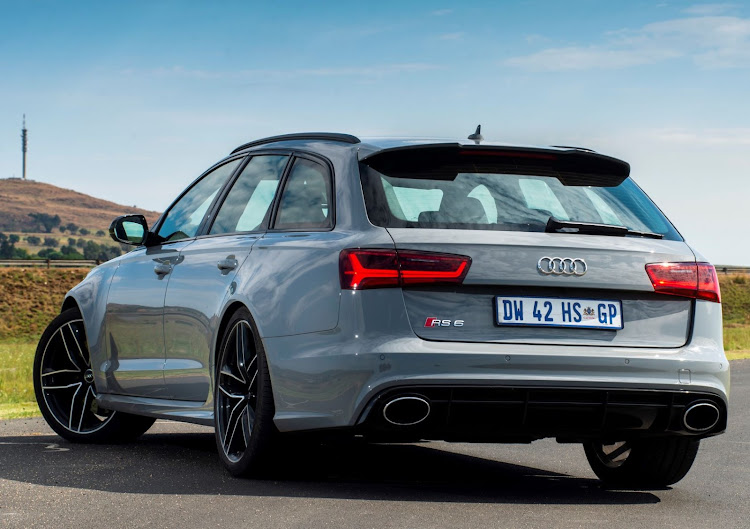 Enter the Audi RS6, available only in Avant this time around, and its station wagon silhouette cracks a positive nod with me. Not only does it accentuate the baroque pose of the Ingolstadt carmakers’ RS models, but it also boasts more boot space and has a resolutely better laid out cabin, not to mention weighing in slightly lighter than the Beemer.

That 4.0-litre twin-turbo V8 mill remains a peach among its ilk, offering oodles of shove from the get-go, the latter certainly emphasised by the Quattro four-wheel drive system employed beneath. The conventional eight-speed automatic doing duty here may lack the dexterity of a dual clutch unit, but it remains suitably adept, adequately responsive, and reassuringly sturdy.

While SUVs continue to be the craze of affluent South African buyers in the premium segment, Audi’s knack of building visually appealing wagons, which are admittedly averted by the majority of South African car consumers, means they remain exclusive entities on the road. And that for me further heightens the prospect of sealing the deal. Simply put, the four-rings is the unanimous winner from my corner of the ring.

Join us as we take a gander back at some of our automotive endeavours from days gone by. This week, the time machine takes us to February 21 2016, ...
Motoring
2 years ago

Join us as we take a gander back at some of our automotive endeavours from days gone by. This week, the time machine takes us to July 30, 2017, where ...
Motoring
2 years ago

Join us as we take a gander back at some of our automotive endeavours from days gone by. This week, the time machine takes us to September 14, 2016, ...
Motoring
2 years ago