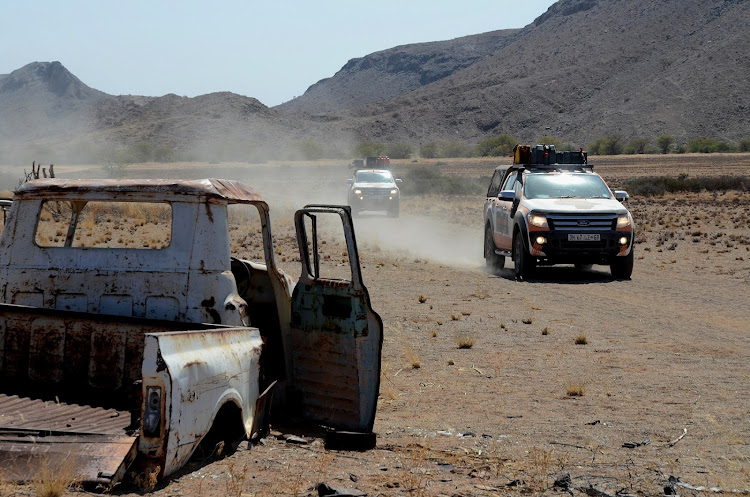 Check yourself before you wreck yourself – the Ranger Odyssey crew roll through Namibia.
Image: Supplied

Join us as we take a gander back at our motoring endeavours from days gone by. This week, the calendar is flipped to August 20 2015, when Brenwin Naidu described his experience at the main leg of the Ford Ranger Odyssey in Namibia. It was largely unpleasant. But the Tafel Lager at the airport after several days of drinking tepid, suspiciously viscous desert water was great.

It struck me in the middle of the dry, deathly afternoon heat: the Ford Ranger Odyssey campaign livery echoes that of the horrid former South African flag.

On the cusp of sunstroke, my mind wandered to notions of what conscription in the bad old days might have been like. Here we were — at the mercy of sadistic, outdoorsy pedagogues with stubbly faces and gruff voices. Their cheeks red from hurling orders under the harsh Namibian rays. The veins in their muscle-bound arms pulsating. They were clearly enjoying it.

The contestants, of course, lapped it up — tolerating such abuse in anticipation of the spoils at stake.

Media observers like myself were a little less enthused. But maybe I am being melodramatic. Because unlike what that flag symbolised, the Odyssey is a celebration of African diversity. 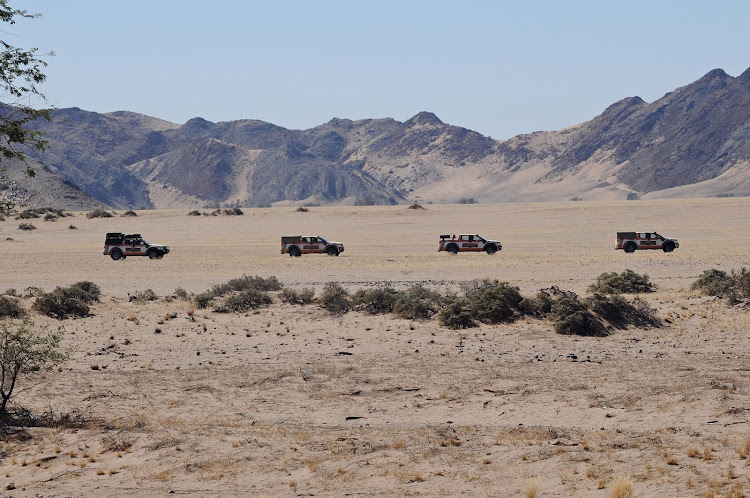 From Angola to Ivory Coast and pretty much everywhere else in between, the continent was amply represented in the gruelling competition. It was a melting pot of colours and nationalities. And seeing such cohesion warmed the spirit possibly more effectively than a sneaky hip flask laden to the brim with brandy.

We were invited to join on the last leg of the challenge. By the time our chartered plane landed in the barren expanse of the desert, the trip had already seen seven days of arduous travel through the remotest parts of Namibia. Five contestants had been eliminated, leaving 15 in the running.

Some, we heard, had not bowed out gracefully. One particular chap — contestant No 4 — did what most modern citizens would do: air his grievance about being cast off. He ranted on social media, starting a Facebook group in the hope that he might be brought back. His efforts were in vain.

In fact, Ford ensured that the criteria used to assess contestants was rigorous enough to filter out the less sweet apples from the batch. Teamwork was a big aspect. And it was interesting to see how various personalities melded within a group dynamic. You had your loud, go-for-glory characters; maternal personalities; and unassuming players who just got the job done without trying too hard to kiss posterior.

It would not be unfair to liken the Odyssey to the reality TV series Survivor. Then there were the practical aspects of off-road motoring. Candidates were tested with tasks such as daily pre-drive inspections, recovering bogged vehicles and correct driving practices.

But for all the competitive elements of the Odyssey, we cannot forget the crux of the whole thing, and that was enjoying the great outdoors in the venerable pick-up truck that has helped Ford maintain a stronghold over the sales charts in the past year.

And my goodness, what a memorable experience it was! Even a grumpy hack like myself, stricken with the most horrible case of influenza at the time, could not help but feel moved by the beauty of the Namibian wilderness. We were humbled by the vastness of Desolation Valley — named so for obvious reasons. 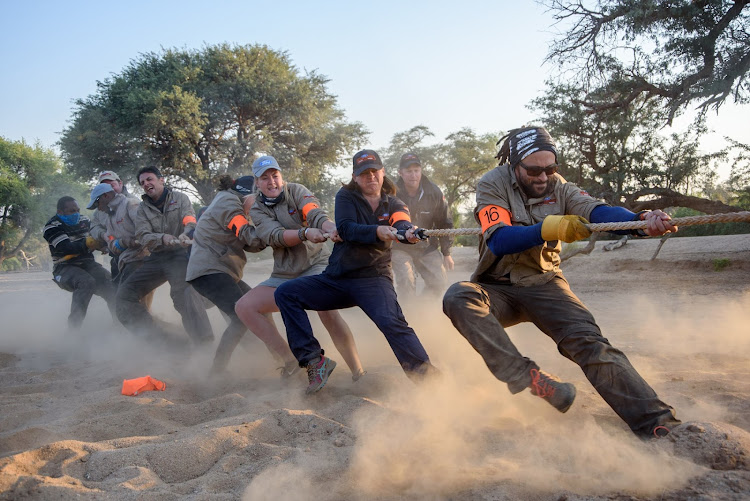 There was curious evidence of travellers who were less lucky in their quest. We spotted the rusted shell of an old Volkswagen Beetle baking away. One wonders how it ended up there and whether the occupants made it to share their story of survival.

Being stranded in an area like that is something you would want to avoid. Your chance of bumping into anyone else is nil. There is nobody — just mountainous terrain as far as the eye can see. And wild animals.

The Ranger fleet, fully adorned with paraphernalia needed for a massive expedition, was truly put to the test. Apart from soft sand driving, we encountered jarring corrugated surfaces, muddy ruts, jagged rock and uphill obstacles that threw a tough workout to the underpinnings.

As a test to prove the mettle of an off-road vehicle, you could probably not do better than this. And the machines held up well. There were a few incidents of shredded rubber. And on one Ranger, the lower control arm of the suspension gave way. That was due to a lack of mechanical sympathy from one of the drivers. But those mishaps aside, no serious issues were had.

Ranger owners are going to be quite smug in the knowledge that the “built tough” mantra Ford wields is more than a marketing tagline. At the recent Go Further summit, hosted by Ford in Johannesburg, contestants waited with bated breath for the announcement of the overall winner. The ritzy event saw them ditching the explorer regalia for cocktail dresses and suits. 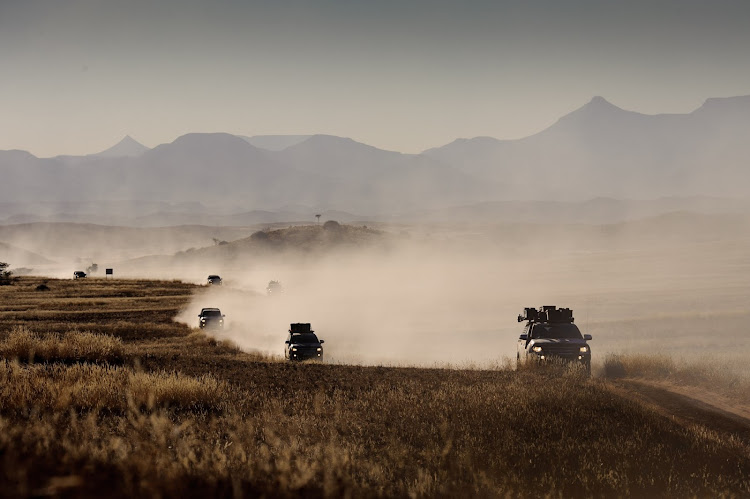 The top prize went to energetic 23-year-old Liane van Dyk — a refreshing victor who broke the khaki-shorts template of the typical bakkie owner in SA. Van Dyk, a computer programmer from Pretoria, had consistent high scores on the rating sheets and was described by Ford as the front-runner in the competition from the start.

Her prize was ownership of a Ford Ranger for a year, as well as a monthly R5,000 fuel voucher. Van Dyk told us: “I feel society has this irrational idea that only men can drive bakkies and I believe that being an ambassador for the Ranger might help draw more females to the brand, which is a whole new playing field.”

The competition also created an interesting humanitarian project. One of the final challenges for contestants was proposing a corporate social responsibility initiative. This component was won by Jacobus Muller, 28, who will be helping to develop a creche with a windmill system that generates power, in addition to delivering clean water.

As brand-building exercises go, there is little doubt that the Odyssey does wonders for the equity of the Ranger nameplate.

And while it might be a costly initiative, talks are already under way for the next instalment of the challenge. We overheard discussions about taking the expedition to other continents — possibly South America.

If you have plans to enter, remember that the Ford Ranger Odyssey is most certainly not for urban weaklings — like myself. Next year I will be watching via YouTube from the comfort of my office chair.

Join us as we take a look back at some of our motoring endeavours from days gone by. This week, Brenwin Naidu flips the calendar to June 26, 2015, ...
Motoring
1 year ago