#ThrowbackThursday: JHB to CPT on just one tank (2015) 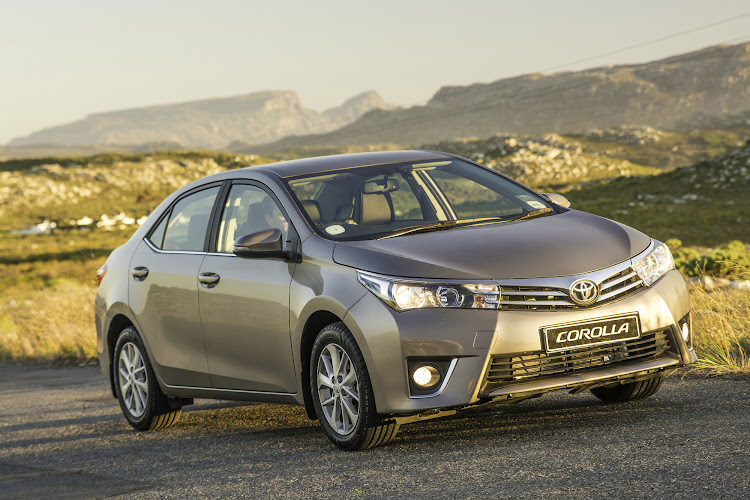 The Toyota Corolla 1.4 D is the epitome of frugality.
Image: Supplied

Join us as we look back at some of our motoring adventures from days gone by. This week, the calendar is flipped to April 16 2015, where Bruce “Lightfoot” Fraser and Brenwin “Range Extender” Naidu embarked on a different Cape Epic.

The best ideas come at unexpected times. Toyota had offered this supplement money in exchange for a different kind of advertorial. You know, one that you would actually want to read.

I was at the office water cooler when the light-bulb moment happened: editor Bruce Fraser and I should test how economical the 11th-generation Corolla was by attempting a Johannesburg-to-Cape Town trip on one tank of fuel.

“I mean, how hard can it be?” I thought — having always been a glass-half-full kind of lad. But then I did the maths. We chose the frugal 1.4 D derivative. Based on the claimed consumption of 4.5l/100km and 55l tank, we calculated a range of 1,222km. But according to our good friend Google Maps, the distance we had to travel was 1,399km — 177km more than the car was supposed to be able to do.

So, we went to our boss, Wynter Murdoch, who has a number of Total Economy Run competitions and victories under his belt, to get his advice. “Remove everything unnecessary; carpets, headrests, the spare wheel — dress lightly too,” he advised. “With a good tailwind you might just make it, and if you can, try the drafting technique behind trucks.” The alarming part was that he was being serious. Speed —or rather a lack of it — would be crucial to the success of this seemingly impossible mission.

We would need to peg our average at a pedestrian 80km/h to avoid the vagaries of “drag”: as a vehicle moves faster, air resistance increases, meaning the car has to use more fuel. We decided not to rip out the carpets or dress in shorts and flipflops, but we would have to apply those two fundamentals of economy runs: air-conditioning off and windows up. Thankfully, we had help in the form of a Toyota Fortuner, in which we carted our luggage and, more importantly, two jerry cans of diesel.

It also meant we could tackle the drive in shifts. After a few hours in the Corolla, we would switch places and whoever was driving the Fortuner would speed ahead and then stop for a break until the little diesel sedan appeared. This eliminated the possibility of a workplace spat fuelled by heatstroke and the frustration of driving at the pace of service delivery.

So at 4.30am on Wednesday last week, with the Corolla filled to the brim — we had employed the hi-tech “rocking” technique to make sure — we set off from the Times Media Group building in Rosebank. Our trip would be punctuated by an overnight stop at the Merino Inn in Colesberg, and Thursday would see us trekking the last stretch to Cape Town, hopefully making it to our accommodation at the Protea Fire & Ice! in Tamboerskloof.

We were off! The Corolla slipped along in the left lane of the deserted N1 freeway, plodding confidently through the morning mist. I took the helm first and despite the gloom cast by the calculations, felt upbeat about making it to The Mountain. But the on-board computer did not seem to share my optimism, showing a range of 870km after juicing up. One thing you will master on an economy run is your right foot. Anyone can plant it through the floorboards. But it takes skill to keep it depressed just enough. And I was seeing the results.

But that pessimistic range-ometer still pestered the mind. However, there was no time to heed our digital naysayer. Between keeping that foot level and courteously moving to the yellow lane, our focus was on maintaining a steady pace. Ambling along at 80km/h offers a bit of a road reality check. Try it some time. We saw countless instances of dodgy overtaking and malevolent tailgating. At 80km/h an hour your perspective changes. I flinched when motorists whooshed past at speeds well over the national limit. 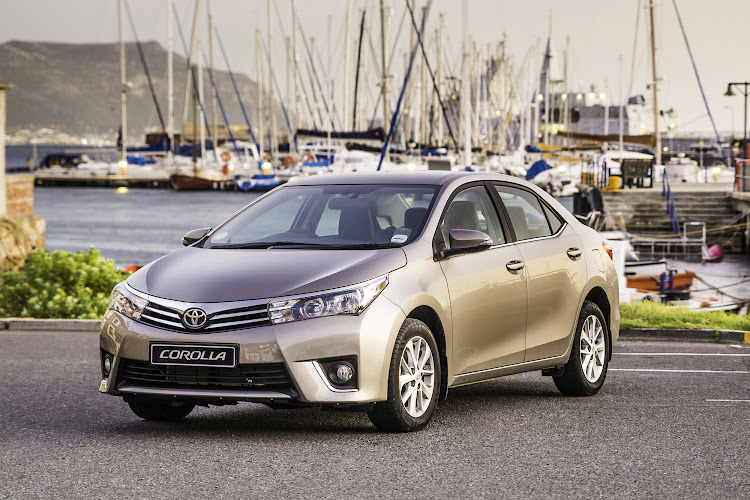 To be honest, though, I think we might have incurred one traffic fine during the trip. It was while approaching a tollgate and, in my defence, I was trying to coast as far as I could without having to use the brakes. We pulled into the Merino Inn at 2pm, having covered 615.8km. It seems Google was about 23.3km off in its calculation of the total distance. But the challenge was still on: we had to find fuel for 153.7km more than we had in the tank.

At Colesberg, the needle indicated that we had just under three-quarters of a tank left. Our average consumption had gone down to 3.4l/100km. At this rate, things were looking hopeful. We settled in and feasted on steak so fresh it had probably passed us on the freeway during the day. Thursday saw another early start. Groggy but determined, we hit the road at 4am. That day, the sun rose at 6.51am — and I pulled over to witness the sight, enjoy a puff and to check out all the encouragement our IgnitionLive fans had shown on social media.

We were going to make it! “Not so fast,” our Corolla seemed to intone. Outside Beaufort West a sign read that Cape Town was 456km away. According to our range indicator, we had just 297km left before the car would throw in the towel. No matter: we soldiered on. In any journey, the home stretch always seems to be the toughest bit.

I believe it was the heat and the lack of ventilation that had Bruce seeing a consumption figure of 3.3l/100km. I certainly never saw those digits. Instead, I found myself singing — and thinking — out loud, like Ed Sheeran. A certain four-letter word may have escaped too. It was not “Cape”.

But we were getting closer. Some glorious respite from the sun came in the form of the Huguenot Tunnel. At the final toll, our fuel situation was looking good, with the needle sitting between the last two marks on the gauge. Just 100km to go — but we were not going to get excited until we were sipping those famous Fire & Ice! milkshakes. Each second felt like an eternity, in which we found ourselves evaluating all the decisions in our lives leading to this point. It was sweltering — around 38°C.

There were clouds above moving faster than our Corolla. And I was tired. The sight of Lion’s Head gave me a morale boost. And what the heck — since we were so close, I opened all four windows. I think I deserved it.

We made it. The range readout even changed its tune. We coasted into the hotel parking lot, and it said we could travel another 79km! Given its conservative estimates, I say we could have made it back to Colesberg. Even after reaching the airport the next day the fuel warning light was still not on. We had travelled 1,395.4km. Our average consumption had been 3.5l/100km and we had spent about 21 hours on the road. Mission accomplished — but it was no easy feat.

Every now and then, one reads an article that is so well-written it becomes embedded in the subconscious. For me, such an article was written by Sunday Times motoring correspondent Thomas Falkiner back in 2008, which involved a road trip to the open expanses of the Northern Cape with a single goal in mind — to crack 300km/h in an Audi R8.

The feature was crafted in such a way that I didn’t so much read it on a lazy Sunday morning in the comfort of my home but was transported next to the writer as he hurtled down the road — everything a blur as he pushed the car to its ultimate limit. He shared his emotions as he broke through various barriers before falling agonisingly short of his target — those split-seconds in which a false move would result in certain death.

And after reading the article I always had the desire to do my maiden road trip to Cape Town in some sort of performance vehicle. So please excuse me if I wasn’t all that excited about doing an economy run from Johannesburg to Cape Town in a Toyota Corolla on a single tank of diesel at an average speed of 80km/h.

But the more Brenwin and I chatted about the challenge and started to explore its feasibility, the more attractive the proposition became. Of course there were cynics who said it couldn’t be done. They had a point — just the simple fact that we calculated the tank range for the 1.4 Corolla D Esteem was 1,222km and our trip would encompass close on 1 400km cast doubt on whether we should even attempt the exercise — hence the trip’s slogan, “Mission Impossible”. 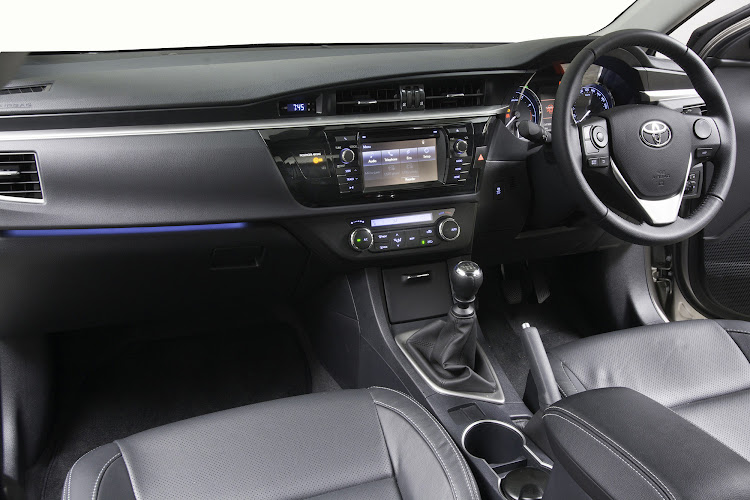 The interior is comfortable and well-appointed.
Image: Supplied

But with the odds stacked against us, we were more determined than ever to succeed. And as our journey unfolded from a wet and cold Johannesburg morning to a sweltering Cape Town the next day, it was a true adventure. Of course there were times of frustration — when you simply wanted to go that little bit faster as 80km/h cabin fever set in; when you were tempted to switch on the air-conditioning to give you respite from the stifling conditions thanks to the 38°C outside temperature as we travelled through the winelands.

But the lows were significantly outweighed by the highs, and for me it was the experience of travelling through the Karoo in the early hours of the morning. We’ve all read about the Karoo, heard people speak of this great expanse of beauty that stretches in every conceivable direction, but travel through it at 4am with nothing more for company than the illumination of the road’s cat’s-eyes, the darkness of the sky studded with stars and just the faint twinkling of another vehicle’s rear lights made this a special moment.

Travelling at our predetermined speed, I had no choice but to soak up the region’s beauty as I edged ahead. And in a way, I am thankful for this as I got to appreciate the isolation more than the traditional way of getting to Cape Town — which is in as short a time as possible. It was those early hours of complete darkness — before streaks of crimson light seeped in over an indistinguishable horizon to signal a new day — that had me spellbound. The solitude of endless stretches of tar with just the odd gravel road snaking off in the distance.

Not a human in sight. Perfect. At one stage I decided to briefly pull over and experience the region’s serenity outside the confines of the car. Not a sound anywhere — total simplicity with just the smell of the great outdoors that I drank deep on. It’s a SA foreign to most of us, but one you should experience at least once. So whether you push the envelope, as Tom did in the Audi R8, or make the impossible possible, as Brenwin and I did by driving from Johannesburg to Cape Town on a single tank of fuel, I guess they are two extremes that, in a small way, contribute to the marvel of modern motoring.

This week the time machine takes us to December 13 2015, when we sought to provide an overview of what the B-segment crossover field had to offer.
Motoring
1 year ago