Which Premier League football team has the priciest car collection?

How much footballers earn and what they like to spend their money on is a topic that constantly hits the headlines. From Lamborghinis to Ferraris, they own it all. But which Premier League team has the priciest collection?

Interested in finding out, analysts at Gamblingdeals.com scoured social media and reputable online articles to find the average cost of each player’s car collection and they can now reveal which team is most likely to drop a pretty penny on a new set of wheels.

Which premier league team spends the most on cars?

Taking the title of the Premier League team with the most expensive car collection is Arsenal, with each car costing a whopping £243,030 (R4.89m) on average! Contributing the most to their team’s average car price is captain and star-player Aubameyang with his Ferrari LaFerrari which costs £1.15 million. It seems like the Gunners can’t resist a Lamborghini, there being seven among the club's players, with the next most popular cars being Ferraris (four) and Mercedes (four).

Following behind are current Premier League leaders Tottenham Hotspur with the average price of each player's car totalling £218,063. Also lucky enough to own one of only 499 Ferrari LaFerrari’s in the world is South Korean striker Son Heung-Min who contributed £1.15 million to his team’s total. Gamblingdeals.com found that Dele Alli owns a Rolls-Royce Phantom and Bentley Continental GT which contributed a handsome £593,550 to his team’s average car price.

Completing the list of top 10 big spenders on cars are:

At the other end of the spectrum, taking the title of the Premier League team who spend the least on cars is Fulham, with players spending an average of £45,000 on their cars. Of the Fulham squad, Mario Lemina spent the least when picking the Mercedes-AMG 4matic, which sells for £39,465, as his choice of wheels. 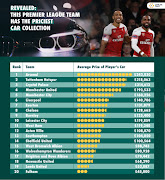 Image: Supplied Arsenal players spend the most on their cars, with the average price of each player’s car totalling £243,030.

How long would the average person have to work to afford one of their cars?

According to ONS, the average full-time annual salary in the UK is £35,423, and taking the average price of each Premier League team member's car, Gamblingdeals.com discovered how many years you would have to work to own just one player's car.

To afford the average price of one Arsenal player's car, you would have to work and save all your pay for almost seven years.

To afford a car owned by a first-team player from Tottenham Hotspur or Crystal Palace you would have to work and save all your earnings for more than six years (6.2 years and 6.1 years respectively).

Completing the top five teams you would have to work longest for are Manchester United and Manchester City. If you dream of one day driving matching cars with a City or United player, 5.5 and 4.5 years is how long it would take you, based on the average annual salary.