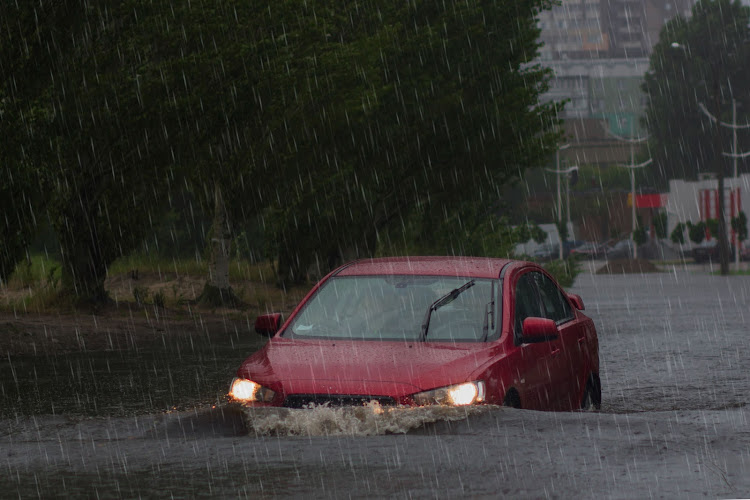 The recent heavy rains have brought many motorists face to face with the hazards of flooded roads. An encounter with storm water is not only frightful in itself, but driving through deep water – deeper than half the height of the wheels – might have hidden consequences which require prompt attention to prevent future problems.

Half the height of the wheels is about the level where water will begin to enter the passenger compartment if the bottom door seals are not up to scratch. That will result, at the very least, in damp carpets, soon followed by mold and a musty odour. Wet carpets should be removed and hung out to dry. If the upholstery was also soaked, use a fan to help dry it. Finally, leave open containers with bicarbonate of soda (a good dehumidifier) around the interior of the car for a few days.

If the water reached well above axle height, the risks become more serious than just soggy carpets. The first danger is water penetration into electrical or electronic equipment. The deeper the water and the more splashing generated as you plough through it, the higher the risk.

Starter motors and alternators are often first in the dunking zone. If you are lucky, the engine's heat will help to dry these accessories reasonably quickly, and no harm will come of it. But higher up are things like distributors (on older cars), ignition modules, coil packs, fuse boxes and, most ominously, the engine control module – the dreaded black box.

The effects of water penetration in these components will vary, depending on which component is involved. Dampness in a distributor will instantly cause the engine to cut out and obstinately refuse to restart. With other components the engine will stumble, stutter, surge and generally misbehave immediately after the event, and with others the consequences may only surface months later when baffling symptoms begin to appear.

If an engine starts spluttering, don't let it struggle for too long in the hope it will clear itself. With each misfire the full charge of injected fuel is dumped in the catalytic converter, which will try to burn it off. That generates a lot of heat in the cat, which will ruin it fairly quickly. It may be cheaper to have the vehicle towed home where you can first dry the engine thoroughly – a hair dryer is a great help – and then call in specialist assistance if the problem persists.

The worst scenario is when water was sucked past the air cleaner into one or more cylinders. Water, being incompressible, will prevent the piston from completing its compression stroke. The engine will effectively be locked (“hydrolocked”).

Should this happen while the engine is running, a bent conrod is almost inevitable. Fortunately, hydrolocking is an extreme occurrence, and you could (should) check for it by turning the engine by hand with the gearbox in neutral.

Another risk, more prevalent than hydrolocking, is that water can get past oil seals into crankcases, wheel bearings, differentials or gearboxes. This can happen whenever these seals are submerged. Thus it is always advisable to repack wheel bearings and replace gearbox, diff and engine oil after driving through deep water.

An insidious danger following a season of flooding is the scores of used cars  put on the market by unscrupulous owners who know what has happened and want to offload their vehicles before delayed consequences come to light. Used car buyers should be extremely wary during the post-flooding period.

The daunting complexity of modern cars, and the increasing alienation of the man-in-the-street from the DIY culture, have given rise to the ...
Motoring
1 year ago

The halcyon days of a new vehicle is a time to be savoured. That wonderful “new car” smell, the smoothness, the quietness, the precision of the ...
Motoring
1 year ago

For weeks on end now the family chariot has been looking at you quizzically each time you walk past. What's going on? When are we going for a decent ...
Motoring
2 years ago