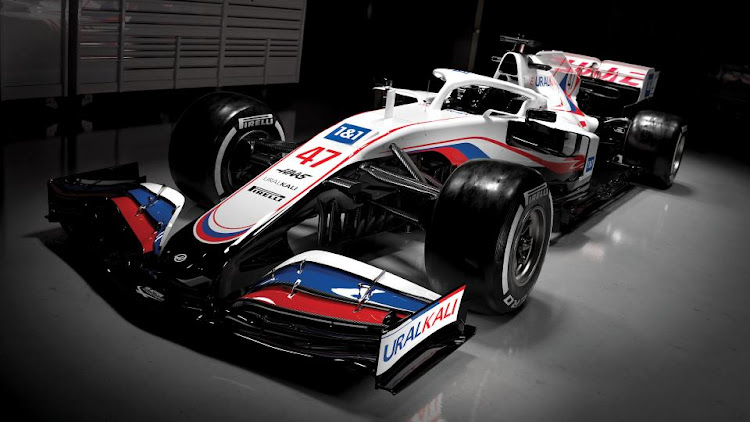 The US-owned Haas Formula One team presented its 2021 car in Russian colours on Thursday with potash producer Uralkali, owned by the billionaire father of new Russian driver Nikita Mazepin, joining as title sponsor.

Mazepin will be partnered in an all-rookie line-up with Mick Schumacher, son of Ferrari great Michael and the reigning F2 champion.

“We look forward to representing their brand throughout the season,” the American said in a statement announcing the multiyear deal.

“It’s definitely a case of all change but I’m hoping that we get back to being in the mix for scoring some points at these races.

“It’s been a tough couple of seasons, but we’ve also got our eye on the bigger picture, in particular 2022 and the implementation of the new regulations.”

The team released images of the car in a predominantly white livery with red and blue flourishes.

The front wing replicated the white, blue and red bands of the Russian flag.

Team principal Guenther Steiner said it would be a learning year with the team looking to the future and big rule changes next year.

“It’s no secret that the VF-21 will not be developed as we focus our energies now on the 2022 car and, what we hope, will be a more level-playing field,” he said.

“We all know roughly where we expect to be this season in terms of the competition, but we must ensure we’re there to capitalise on opportunities when they present themselves.”

The new car will run for the first time in testing in Bahrain on March 12. The season starts at the Sakhir circuit on March 28.

Aston Martin expect to get the best out of Vettel

Aston Martin say they can give Sebastian Vettel what he wants this season and get the best out of the four-time Formula One world champion as he ...
Motoring
1 month ago

Porsche and the Volkswagen Group would consider entering Formula One if the next engine regulations due to be introduced in 2025 promote sustainable ...
Motoring
1 month ago

James Bond said he was thrilled and seven-times Super Bowl champion Tom Brady threw in support from afar as Aston Martin showed off their first ...
Motoring
1 month ago
Next Article