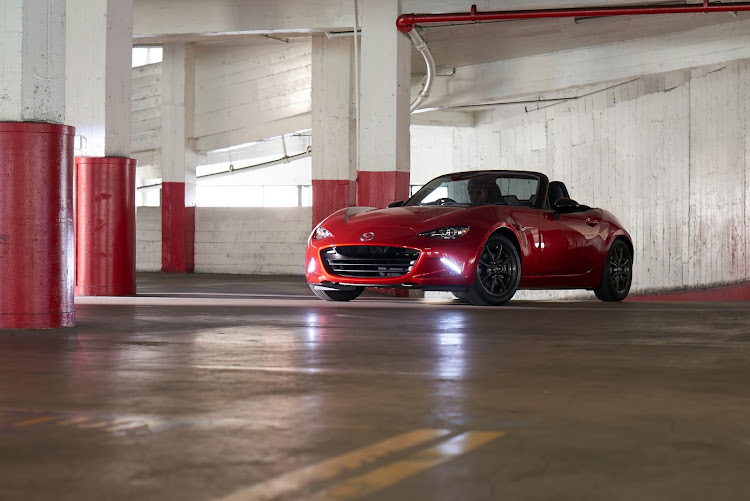 The Mazda MX-5 is a perfect example of the slow-car-fast philosophy.
Image: Supplied

Manufacturers are setting the limits progressively higher as the years trot by. When I refer to limits I’m referring to that magical envelope where you, as a driver, start becoming acutely aware of the forces carrying your speed and momentum.

In a sporty vehicle from not all that long ago you would sense those tyres clawing against the asphalt, hear that engine sucking oxygen and delight in the ever-changing levels of torque twisting through the steering wheel. Living in this zone made you feel at one with the machine because, like some second skin, you had a real tangible sense of what it was doing. Your humble meat-covered skeleton felt as integral a part of the vehicle as the wheels, gearbox and dampers.

Modern supercars can still stir the ’ol loins, of course they can, but thanks to the quantum leaps taken in automotive technology over the last decade, this tactile window I speak of has become a far more difficult place to reach. Adaptive suspension systems, active anti-roll bars and rear-wheel steering – to name but a few of the gizmos – have advanced the breed so much that achieving any real level of involvement requires silly speeds and a sizable set of cohunes.

Chasing the dragon in something like a McLaren 650S is, all well and good, but by doing so you’re suddenly gambling in a high stakes arena where even the smallest error can have dire consequences. Especially when 250km/h feels more like 140km/h.

This is one of the major shortcomings of the contemporary road rocket: If you’re not travelling through space and time at jail-baiting velocities then they’re about as enthralling to pilot as a Toyota Camry with a slightly more fruity exhaust note.

Even more so if you live in a semi-dystopian city such as Johannesburg, where unmarked speed bumps continue popping up like poisonous mushrooms, and every second corner apex is ruined by an UberEats rider on a crabbing, ill-maintained motorcycle with no tail lights. Indeed, steering a high-powered exotic through the City of Gold is like riding Chris Froome’s Tour de France-winning road bicycle around your lounge: frustrating and a waste of time.

“So what are you suggesting, pal” I can hear you questioning, “should we damn everything with 300-plus kilowatts to hell?” Well, no, obviously not. If you’re lucky enough to live somewhere like the Western Cape, with awesome driving roads aplenty, or have the funds to take advantage of regular track days, then the supercar does still make some modicum of sense. I suppose.

Personally, however, I get far more kicks wringing the necks of slower machinery where you can exploit all the car’s potential more of the time. In other words slow-car-fast.

While there’s a massive novelty factor in having an Audi R8 V10 parked inside my garage for a few days, I’d happily swap it for something like a Mazda MX-5, Toyota GT86, Suzuki Swift Sport or Abarth 595. Not because they’re better or cheaper cars but because out in the real world, on roads full of potholes and motorised takeout boxes and wayward taxis, you can happily (and safely) thrash the wheels off every one of them and feel like you’re doing the machine some justice.

I can tell you that in the Audi you will spend most of your days reining those horses in, whereas in the Mazda et al you can delight in letting them all run amok. The limits are lower and more accessible, fun is easier to find (even a quick blast down to the shops and back should provide ample opportunity) and if things ever start to go awry, you have a little extra time to react and avoid the shame of crashing and trending on social media. Crucially, you can immerse yourself more often in that most visceral of zones where muscle and automotive metal fleetingly merge into one.

Now isn’t that what motoring should be about?

The future of cars is going to suck

The other night I was lounging on my sofa watching Two-Lane Blacktop, an existential road movie starring musicians James Taylor and Dennis Wilson. ...
Motoring
2 weeks ago