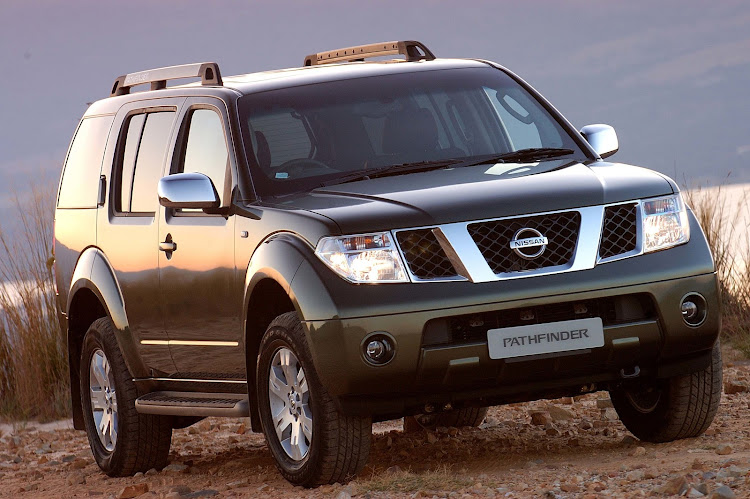 A Nissan Pathfinder similar to the one purchased by Hendrik Janse van Rensburg.
Image: Supplied

When Hendrik Janse van Rensburg took delivery of a 2006 Nissan Pathfinder 4.0 V6 in February this year, he figured he would be in for sturdy, reliable daily transport. The vehicle had 170,047km on the odometer.

He claimed, however, that it gave problems on the same day he purchased it, when, upon returning home, the air-conditioner did not work.

He was told by the dealership that sold him the vehicle, Bryanston Executive Cars, that he should take it to a workshop that was approved by the Retail Motor Industry Organisation (RMI) and that the repair bill would be covered.

“I went to Millennium 2000 [the workshop] and the air conditioner was fixed. They told me to bring the car back after a few days to check the gas level,” he said.

During that time, Janse van Rensburg also queried items on the sale invoice that he had not requested. First was a tracking device and the second was tinted windows, which had a combined cost of R6,521.72.

The dealership told him that the finance house with whom the credit agreement for the vehicle was held required the tracking device. He contacted the service provider, Nedbank MFC.

“They informed me that MFC does not insist that a tracker device be fitted.”

Janse van Rensburg was refunded for both items.

When he returned to Millennium 2000 to have the air-conditioner gas inspected, he asked the repairer to have a look at the airbag warning light that had illuminated and a non-functioning hooter.

He was told that the slip-ring on the steering wheel needed replacement. The workshop sent an invoice to the dealership.

“They refused to fix it and I was told to have it fixed by Warranty Solutions, the warranty they recommended me to take out. I contacted them and was told that the slip-ring was not covered by the warranty and I would have to fix it myself.”

In March, the vehicle overheated.

“I made a WhatsApp call to the salesman and informed him. He answered with a message and said he would inform the boss and come back to me as soon as possible. I am still waiting for him to come back to me.”

Nine days later he discovered that the brake disc pads, drums and linings needed replacement. He spent R1,437.50 to address the pads and linings, but postponed the replacement of the drums because of financial constraints.

The next day he was leaving Nelspruit for Pretoria when the car overheated again. Back at the workshop, it was discovered the viscous fan had malfunctioned, leading to the overheating issue. Janse van Rensburg had to foot the bill for the fix, which came to R4,076.75.

“Millennium 2000 asked the dealership when the last service was done on the vehicle. They were informed that the service was only an oil change done before I purchased the car.”

According to Janse van Rensburg, an amount of R3,943.46 was included on the offer to purchase, attributed to servicing that was carried out before he signed the contract.

“Is this acceptable that I should pay for a service on a vehicle that belonged to Bryanston Executive Cars at the time?”

He said that the unreliability of the Nissan had affected his livelihood. A complaint was laid with the Motor Industry Ombudsman of SA (Miosa), which responded on April 29.  A copy of the investigation and recommendations was forwarded to us by Janse van Rensburg.

“According to the respondent, after delivery the complainant complained about the air-conditioning not working. Out of goodwill they paid for the re-gas of the air-conditioner and no other issues were noted then.

“On March 15 2021, the complainant complained about the hooter, cruise control and radio not working due to a slip ring that was damaged after delivery. On April 8 2021, he complained about the vehicle overheating and that the brakes were damaged, and he got them replaced on his own mandate at brakes and clutch.

“The respondent further stated that the complainant was sold a used vehicle with wear and tear for its age and mileage. According to the delivery inspection, mechanical check and roadworthy examination, all was in order at the time of delivery. They will not be able to assist the complainant with any issues that came after delivery. They have met all conditions of the Consumer Protection Act section 55 and they have no duty to repair this vehicle.

“The respondent stated that they sold the subject vehicle in a specific condition; however, there is no indication that section 49 subsection 4 was applicable to this transaction.”

Section 49 and subsection 4 of the Consumer Protection Act 68 of 2008 states:

“Any notice to consumers or provision of a consumer agreement that purports to (a) limit in any way the risk or liability of the supplier or any other person; (b) constitute an assumption of risk or liability by the consumer; (c) impose an obligation on the consumer to indemnify the supplier or any other person for any cause; or (d) be an acknowledgment of any fact by the consumer must be drawn to the attention of the consumer (a) in a conspicuous manner and form that is likely to attract the attention of an ordinarily alert consumer, having regard to the circumstances; and (b) before the earlier of the time at which the consumer (i) enters into the transaction or agreement, begins to engage in the activity, or enters or gains access to the facility; or (ii) is required or expected to offer consideration for the transaction or agreement.”

The Miosa response went on to state:

“In terms of section 55 subsection 2 of the Consumer Protection Act 68 of 2008, every consumer has a right to receive goods that are reasonably suitable for the purposes for which they are generally intended; are of good quality, in good working order and free of any defects; and will be usable and durable for a reasonable period of time, having regard to the use to which they would normally be put and to all the surrounding circumstances of their supply.

“The subject vehicle had mechanical concerns within the provisions of the six-month implied warranty period. Further to the above, the respondent is adamant that the vehicle was sold in a specific condition; however, the conditions that are referred to are the age and mileage of the vehicle and no mention of any mechanical concerns which were supposed to be brought to the buyer's attention.

“With the above in mind, it is the recommendation of the office of the Miosa that the respondent should take accountability and have the subject vehicle collected at their own risk and expense, [and] have it assessed and repaired in line with section 56 subsection 2 of the Consumer Protection Act 68 of 2008.

“The above action should be carried out within 15 working days as of the date of this correspondence.”

We contacted Bryanston Executive Cars for comment. Luis De Abreu sent us the dealership’s response to the Miosa case, an expectedly lengthy document, summarised effectively by these paragraphs in the introduction:

Since the dealership did not comply with the Miosa ruling, the matter was referred to the National Consumer Commission (NCC). Janse van Rensburg has also sought intervention from his financial service provider.

Suzuki Swift owner Michael Stewart said the brand’s service knocked his socks off for all the wrong reasons. His 2017 1.2 GA is corroded so ...
Motoring
1 year ago