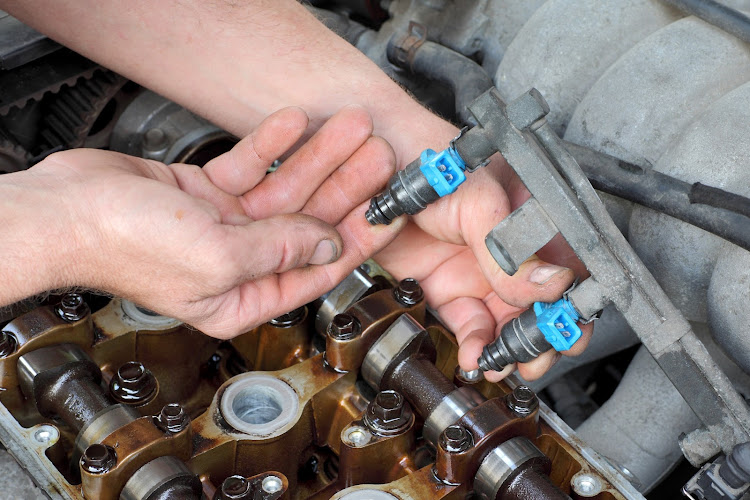 A mechanic inspects a fuel injector on a petrol engine.
Image: sima / 123rf

Petrol fuel injection has made strides since it first appeared om mainstream cars in the mid-1980s (diesel fuel delivery has always been by injection, but we want to focus on petrol engines today).

By the early 1990s most manufacturers had settled on a design comprising a separate injector for each cylinder (multi-point injection, or MPI), which sprayed the petrol into the cylinder’s intake port in the manifold, just upstream of the intake valve(s).

By the turn of the century, port fuel injection, as it is also called, had been refined to the form which today remains the most popular injection system: a pump in the petrol tank delivers fuel at fairly low pressure (about six bar) to a fuel rail feeding the injectors, one for each cylinder, fitted on the inlet manifold. Each injector has an electrical connector for the wires by means of which the engine control module regulates the timing and duration of that particular cylinder’s injection pulses.

The actual opening of the passages inside the injector to allow the fuel to reach the nozzle from where it is squirted toward the inlet valve(s) is done by a small solenoid inside the injector. This tried and tested system offers huge advantages in reliability, fuel economy and driveability over the unlamented carburettor. It has the additional virtues of relative simplicity and cost-effectiveness.

But nothing is static in the motor industry. There had long been advocates of “direct” injection for petrol engines, where the fuel is sprayed directly into the combustion chambers, as happens in most diesel engines. Despite the tantalising prospect, usage of this technology remained rare until Mitsubishi combined it with digitally-controlled engine management on their 1996 Galant.

In modern form it is used in conjunction with a high-pressure fuel rail (“common rail”) feeding the injectors. Higher injection pressure has several advantages. The droplets in the fuel mist emitted by the injectors can be finer, hence they will evaporate faster, leading to improved combustion, more power and/or better fuel economy. Fuel can also be metered more precisely. Moreover injection can take place faster, a very important consideration in direct injection.

However, gasoline direct injection (GDI) has its drawbacks as well. It is much more complex (and expensive) than port injection. The higher pressure – about 200 bar, some 80 times the pressure in car tyres – puts higher demands on all components. The fuel rail, for instance, has to be beefed up considerably. To provide and maintain the pressure, a sophisticated, engine-driven, high-pressure pump is needed, together with pressure regulators.

The injectors are now exposed to the full blast of the combustion process, necessitating the use of special materials. Injection speed is more critical, since the piston will only be in the right part of its travel for a few milliseconds.

Furthermore, as an unintended consequence, GDI engines have shown a propensity for carbon build-up on the back of the inlet valves where oil vapours from the crankcase ventilation system can condense and harden because they are no longer being “washed” away by the petrol spray.

This latter problem, which is exacerbated in the presence of a turbocharger which may start leaking oil at high mileage, has led some manufacturers to provide each cylinder with both a port injector and a direct injector. (Let us not dwell on the ghastly escalation of both cost and complexity.)

Despite the fact that common rail GDI seems to be gaining popularity at the high end of the market, I think the jury is still out on its future in bread-and-butter cars.

Modern cars, bristling with sensors, are good at warning you that something on them is amiss. They are not so good at distinguishing between major ...
Motoring
1 year ago

CAR CLINIC | Automatic Audi A4 is a handful on hills