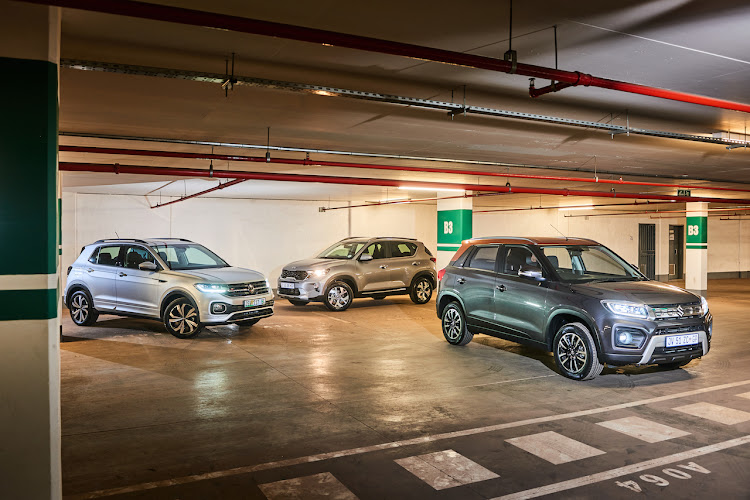 Earlier this year a prominent banking firm said the average amount it financed for new car purchases in SA is R358,390. That would mean a monthly instalment of R7,267 with an interest rate of 8% over 60 months and no balloon payment.

An assortment of competent products could be considered at this price point and certainly well below. Like the trio we are investigating this week.

The realm of compact crossovers and compact sport-utility vehicles require no introduction. Although the jury might still be out on what exactly distinguishes the two terms, for the sake of simplicity we can infer either to be: smallish in dimension, with a hatched tailgate, elevated ground clearance and assertive styling.

The oldest in our trio is the Volkswagen T-Cross, launched to the local market in September 2019. The Kia Sonet arrived earlier this year. So did the Suzuki Vitara Brezza and its twin, the Toyota Urban Cruiser, which we thought not to include because, well, why complicate proceedings? The only factors setting those two doppelgangers apart are dealership footprints and durations of warranties and service plans.

The Nissan Magnite, which joined the market in May, is conspicuous by absence in this comparison. We had made an attempt to secure one. Unfortunately, the test unit suffered a collision before we were due to receive it, with frontal damage that rendered it out of action. 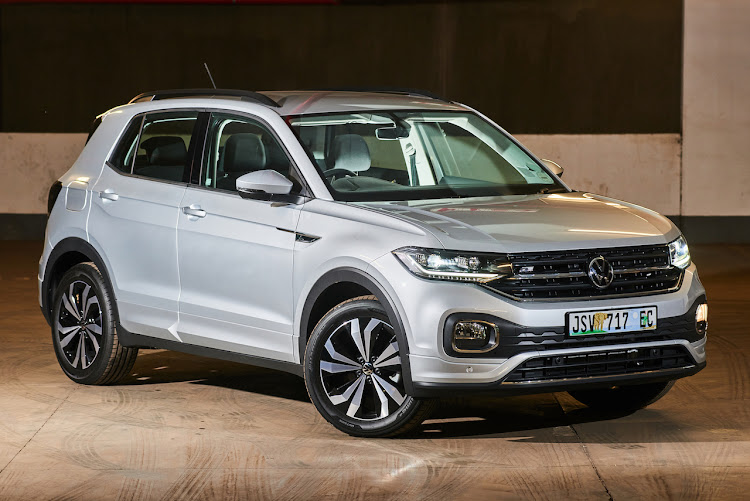 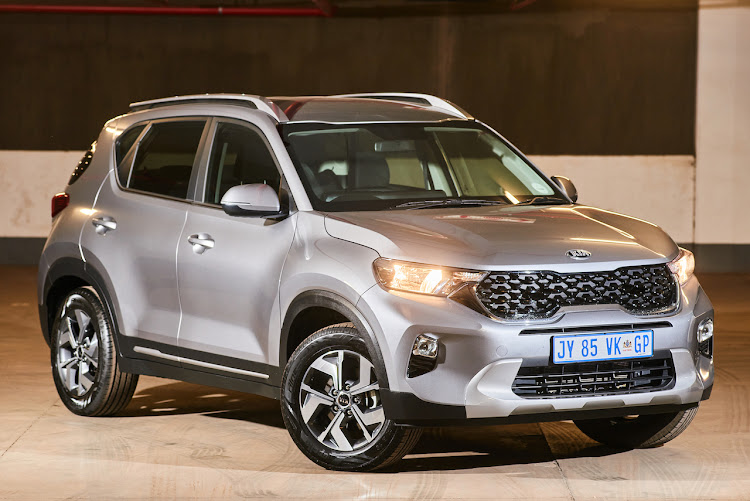 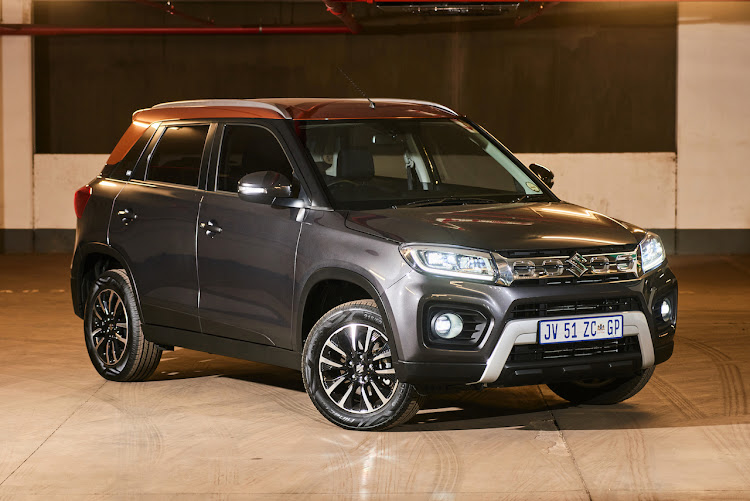 The essential kit list is adequate in the Volkswagen.

An eight-inch, touchscreen infotainment system is standard in the Kia Sonet EX. So is wireless Apple Car Play and Android Auto compatibility, a reverse camera and ventilation slots for the second row of passengers. No keyless entry and the headlamps are of the halogen variety.

Suzuki has not been scant with the amenities. While the other two pack air-conditioning interfaces with archaic rotary dials, the Vitara Brezza GLX counters with an automatic system, button-operated with temperature indication. Keyless entry is standard, so is a push-start button, plus LED headlamps, cruise control and a touchscreen infotainment system. This is a seven-inch setup and though it might lack the visual pizzazz of the systems in its rivals, the expected depth of capability is very much there, in terms of smartphone integration. 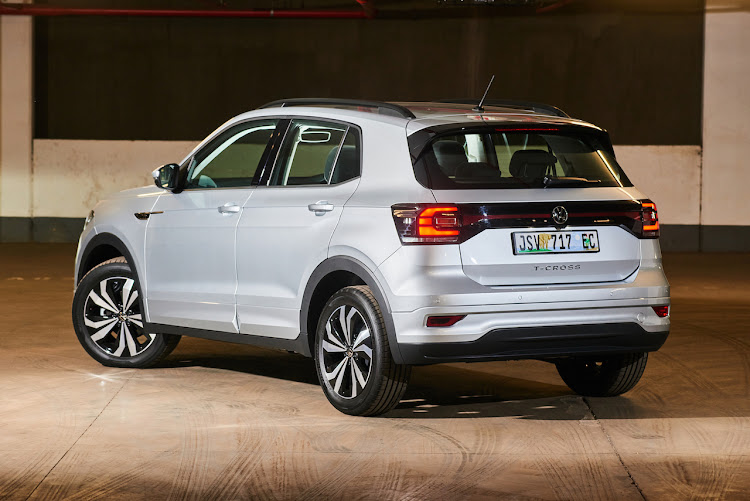 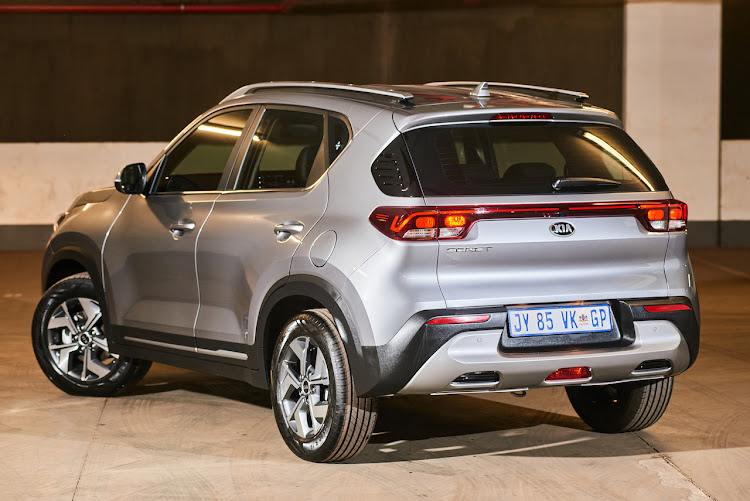 Forego the R-Line styling package fitted to our T-Cross and you have a vehicle that, in standard form, does little to disguise its entry-level status, with ladles of black trim and uninspiring 16-inch rollers. The upright profile of the vehicle is punctuated with character lines that are clean and unfussy.

The Kia rides on standard 16-inch wheels with a diamond-cut design. Illumination by the sun (or the spotlights in our basement) reveals stylistic elements on the body that can go unnoticed. Like the bulges of its fenders. Kinship with the rest of the stable is unmistakable, as the Sonet takes cues from siblings such as the Sportage, particularly at the rear.

You probably guessed it, but the alloys sported by the Vitara are 16-inch in diameter too. They are spiffy, with a polished look. The Brezza wields a more utilitarian outward character, with less emphasis on being pretty and more focus on conveying an impression of toughness. Look at its quartet of mutant nostrils, underscored by a silver chin. Rivets in the cladding, scuff plates down the side and a rear diffuser, it looks appropriately tough for the urban jungle. Safe to say all these vehicles possess endearing aesthetic characteristics, even though they are finished in shades inspired by a gloomy Cape Town storm.

As for the interiors? All have seats upholstered in fabric, with black and grey the dominant hues. All have steering wheels wrapped in leatherette. You might be surprised by the textures found inside the Volkswagen. While the fit of switchgear is faultless, surfaces are of a coarse nature not usually associated with the brand. Even the Polo Vivo has a nicer dashboard, with a soft-touch moulding. Kia did a stellar job with the cabin of the Sonet. The finishes are pleasant to the touch and certain fixtures give off a swanky impression, like those glossy ventilation slot surrounds. Some will like how the tablet-like central display panel spans across the fascia, like it does in a Mercedes-Benz. The plastics in the Suzuki have a certain sheen to them. Functional and hard-wearing is probably the best way to describe the atmosphere. You can find far worse in the segment, that is for sure. 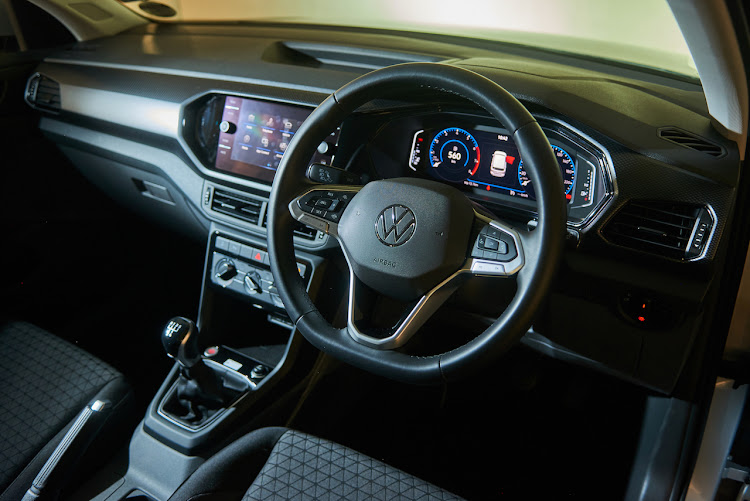 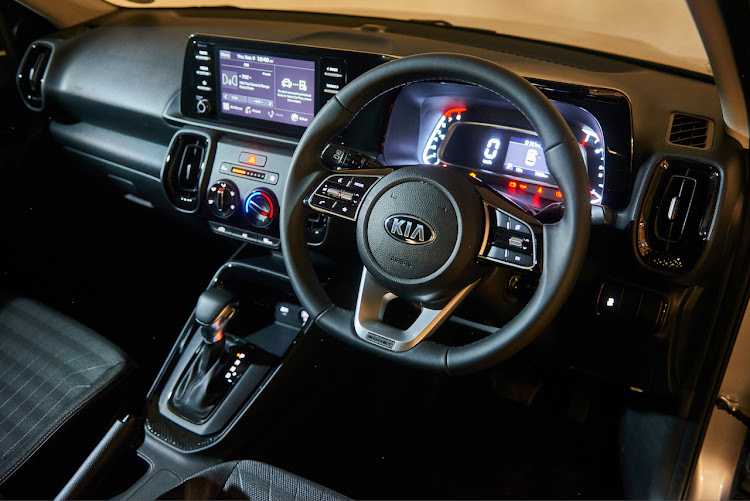 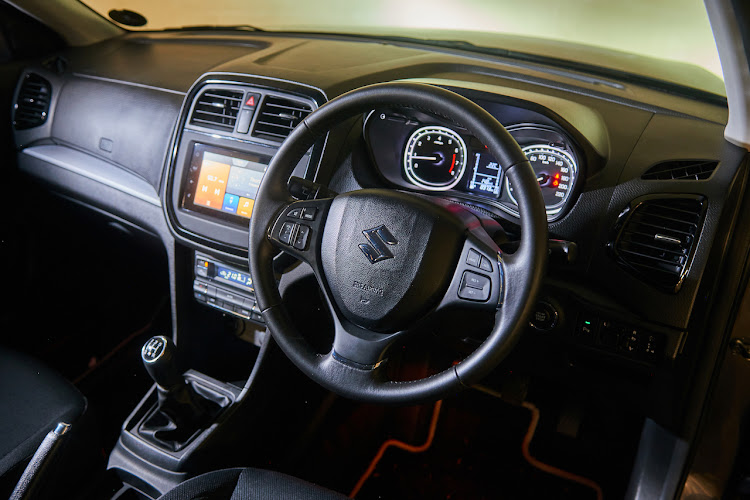 The trio share a similar layout, all with torsion beam rear suspensions, hind drum brakes with discs up front, those being the driven wheels. None offer the choice of all-wheel drive.

A Polo on tip-toes would be more or less correct to describe the manners of the T-Cross. Like the hatchback on which it is based, the Volkswagen is an extremely pleasant steer. From the refined quality of the ride to the minimal levels of noise, vibration and harshness, it makes for a wonderful companion. The 17-inch wheel option on Hankook Ventus Prime 3 (205/55) tyres seemingly do not compromise road comfort.

Being the only turbocharged vehicle here, performance was expectedly superior. The 999cc, three-cylinder petrol motor delivers 70kW and 175Nm, making a charming, growly type of noise as it goes. Our recorded consumption average consumption figure was 5l/100km right on the nose. At 1,154kg it is the middleweight of the trio and has a ground clearance of 180mm.

The Kia Sonet might lack the zesty feel of the boosted T-Cross, though it manages surefooted, confident on-road behaviour, rolling on 215/60 Apollo Alnac 4GS rubber.

It is the heaviest vehicle here, tipping the scales at 1,170kg.

Motivating that weight is a four-cylinder petrol displacing 1,497cc and producing 84.7kW and 143.8Nm. It would probably be more effusive with the six-speed manual, instead of the continuously-variable transmission of our tester, with its characteristic drone. At 4.9l/100km, it returned the best consumption. Ground clearance is 10mm greater than that of the Volkswagen.

At 1,130kg, the Vitara Brezza was the lightest of the bunch. Its 1,462cc, four-cylinder petrol heart is good for 77kW and 136Nm. The motor is zingy and eager to be wound out, one explanation for the highest consumption figure of the week. Relative, of course, because 6.7l/100km is still more than acceptable to most. That might have been better if the manual gearbox had a sixth gear for cruising. It does without the luxurious feel of the Volkswagen and the composure of the Kia, but offers a superior ground clearance at 198mm, which ought to hold it in good stead on dirt. Interestingly, it uses the same tyres as the Sonet, down to the profile, section and brand.

In 2019 Euro NCAP awarded the T-Cross a five-star rating for adult occupant protection. The vehicle was equipped with automatic emergency braking, however, unlike our local models. The Suzuki Vitara Brezza received four stars when Global NCAP tested in 2018. There is no crash test data available yet for the Kia Sonet. 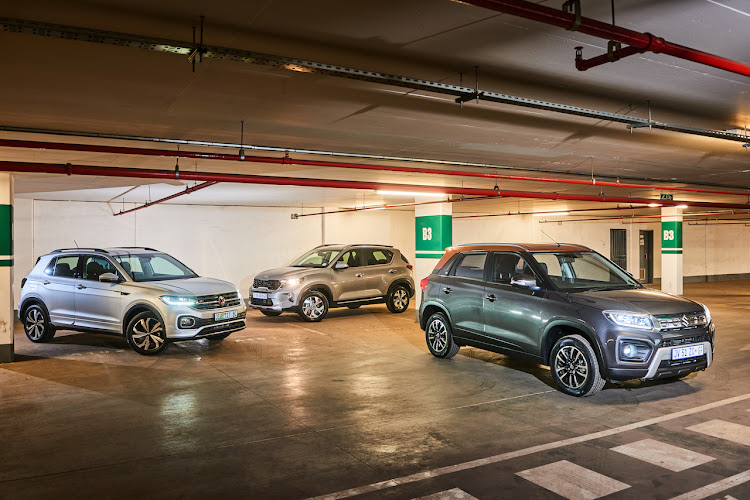 First place goes to the Kia Sonet, middle. Its mix of style, quality, features, keen pricing and impressive aftersales assurances makes it a no-brainer in this company.
Image: Waldo Swiegers

Aside from the additional airbags and turbocharged engine, it is difficult to justify the R36,105 premium that Volkswagen’s T-Cross commands over the Kia Sonet in this comparison. Add another R60,700 in the case of the specific unit featured here — and let’s not forget that it is the entry-level derivative in the range. Go for the two-pedal versions or the range-topping 1.5 TSI R-Line and after some options, you could easily run north of the R500,000 mark, encroaching onto T-Roc territory (from R494,300), possibly even to base Tiguan level (at the R521,000 mark).

Yes, Volkswagen holds an enviable reputation and equity in our market. The T-Cross is an accomplished vehicle on the road, but the Kia is certainly not far behind it, bringing a superior interior ambience though lagging in the powertrain department. A buyer might be considerably more lenient given the notable saving it represents over its German rival. Then there’s that incredible warranty.

Strong value also compels one to look seriously at the Vitara Brezza. That sub-R300,000 sticker price for the manual range-topper is a cracking deal indeed. Aside from its decidedly simpler nature versus the other two, there aren’t any glaring deficiencies. It’s an honest ride with a healthy list of amenities and a respectable safety rating.

So, let’s conclude this duel.

First place goes to the Kia Sonet. Its mix of style, quality, features, keen pricing and and impressive aftersales assurances makes it a no-brainer in this company. Next up is the Suzuki Vitara Brezza, a genuine value champion without frills. Volkswagen, your T-Cross is a lovely thing to drive with a brilliant power source — it’s just not very competitively priced. Take third.

It would be remiss to not point out that the sales figures tell a different story. According to current numbers, the German model is the top performer here. We have it on record that the manufacturer sold 530 units in August. The Japanese firm mustered 469 examples of their contender, while the South Korean accounted for 264 copies.

SA’s petrol price recently hit a record high, with the rapidly rising cost of diesel not far behind (the latest figures suggest yet more pain at the ...
Motoring
11 months ago

Your ultimate guide to the Volkswagen Polo Vivo Mk1

The storied history and social impact of the Volkswagen Citi Golf cannot be ignored. But by the time it was put to pasture at the end of 2009 – more ...
Motoring
11 months ago

These are SA’s 10 most affordable SUVs

Looking for a subcompact crossover on a budget? Here’s the bang you get for your buck.
Motoring
10 months ago