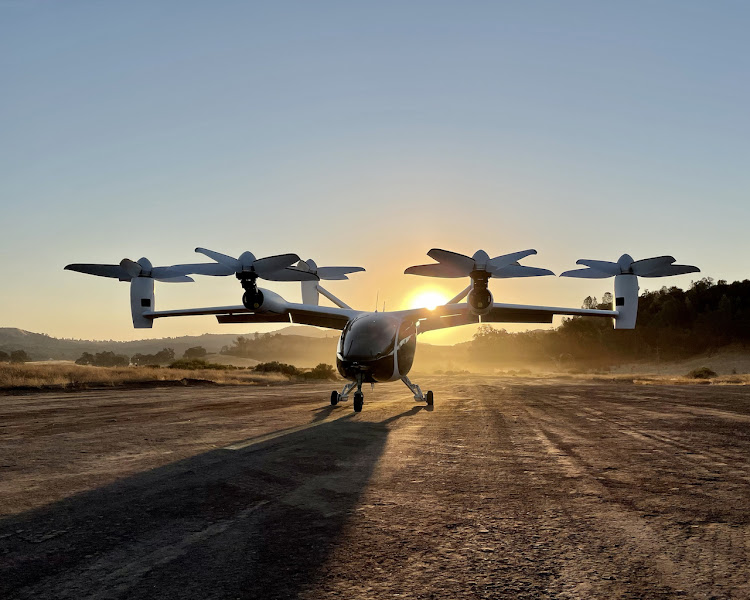 The Joby sky taxi looks a lot like a helicopter and is able to take off and land vertically.
Image: Joby Aviation

Joby Aviation Inc is locking up leases on rooftops where its mosquito-looking machines will land as early as 2024. The commute as envisioned by The Jetsons is finally nigh, though the rigs coming from Joby and its rivals are decidedly un-carlike.

Able to take off and land vertically, they’re a lot like helicopters — only safer, cheaper and far quieter thanks to a cluster of small electric rotors on a fixed wing, allowing the craft to fly (and glide) horizontally. If one of the fans conks out, the remainder can mitigate a disaster.

The flying taxi industry is crowded, with several companies testing machines that approximate giant, people-carrying drones, including manufacturing giants like Hyundai Motor Co and startups like Lilium GmbH. Joby has been at it for 12 years.

Over that time, it has landed about $820m (roughly R11,949,573,000) in venture funding. In August, the company went public via a SPAC backed by LinkedIn co-founder Reid Hoffman. The pitch to both passengers and prospective investors: save one billion people an hour a day.

We sat down with Joby founder and CEO JoeBen Bevirt to talk about his plans to make sky taxis as cheap as ground taxis and his company’s greatest coup: a five-passenger aircraft that sounds like the ocean. The interview has been edited for length and clarity.

How do you feel about the term ‘flying car’. Does it bother you?

That implies something that flies and drives in my mind. The challenge there is you end up with something that’s not optimised for either. What we’ve tried to do here is to build an aircraft  which is really good at being an aircraft and has capabilities no aircraft before it has ever had.

How close are you to a commercial product?

In 2020, we basically agreed with the Federal Aviation Administration (FAA) on a roadmap that we have to take to get through certification, and now we’re marching down that path. Our No 1 priority is the certification. No 2 is scaling the manufacturing. We have our pilot manufacturing facility coming online, and we’re going to roll the first conforming aircraft off that line in 2022. And then the final piece we’ve applied for is an operating certificate that basically is what allows us to fly our aircraft and carry passengers.

What was the hardest part?

We put a lot of work into the acoustics. We’ve spent more than a decade on it, and we’re incredibly pleased about where we are on the absolute sound level and on the quality of that sound. It’s a sound that blends into the background of the environments we're operating in. It's not the ‘wop-wop’ that you get from a helicopter, it's not the whine that you have from a drone. It’s much more like the wind or the ocean.

The early stage of your operating model is point-to-point corridors, not a hub and spoke system?

Yes, if we can connect a large residential area with a large commercial area where we’re saving many people many hours every day, that’s an amazing gift of time. 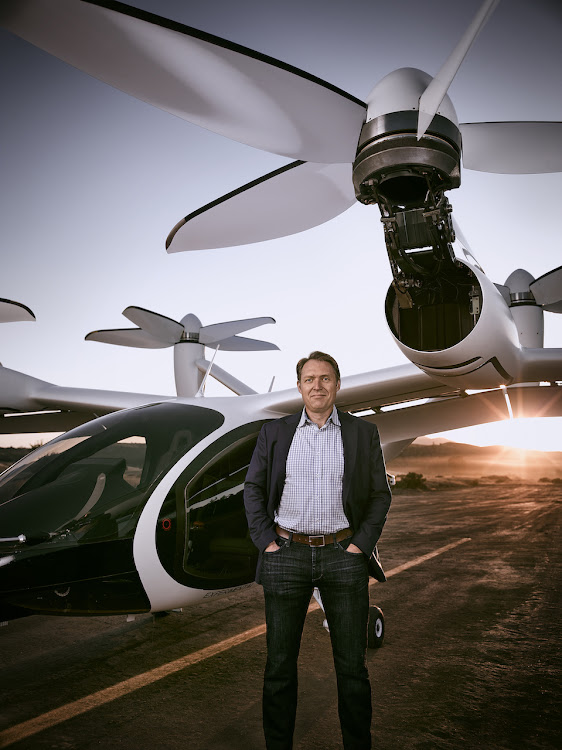 You sort of disseminate from there as you grow with more landing spots?

That’s really a key point of this. The capital cost of putting in a new sky port is a small fraction of what it costs to put in a new highway, and yet, it has exponentially more value because it can take you anywhere. The medium-term future is that we’re landing on lots and lots of rooftops. At launch, it's a discrete number of rooftops that are going to deliver the most value to our customers. That is the focus of our infrastructure team.

How do you think about pricing the service?

We've always believed this had to be affordable, that this had to be something that was accessible to everyone. And so for us that's launching it at the price of a taxi and driving down as aggressively as possible towards the cost of personal car ownership. That is the key to unlock to making this something where everyone's flying instead of driving.

The competitive landscape seems split between dedicated startups, such as yourself, and aviation giants. How do you see it evolving ?

I do believe there will be a flowering of a different aircraft that provide a diversity of capabilities, but we're excited about our aircraft and the choices we made a decade ago in terms of being able to deliver a really diverse set of trips to customers, whether that's across town or to nearby cities.

What do you think an average trip will be in the first two years?

Can you swap the batteries on your craft?

We’ve been very thoughtful about not swapping batteries. Batteries play into two different dimensions in the operating cost: one is the depreciation of the battery, so getting really long life is important, and the other is being able to charge them quickly. By having a large battery pack with a long range on the aircraft, it means that after a 40km flight, we can recharge in five or six minutes, which is about the time it takes to load, unload and reload.

Is there a storytelling hurdle for passengers. This isn’t a flying car per se and it isn’t something you probably want to buy and operate yourself.

I think once people see the aircraft and they get in they will immediately be like, ‘Take me for a ride’. When people experience the time savings and what this means for their lives, it’s going to be a really big ‘ah-ha’ moment.

Israeli startup AIR on Tuesday unveiled its first "easy-to-operate" electric, vertical takeoff and landing aircraft that it aims to sell directly to ...
Motoring
7 months ago

The Covid-19 pandemic this year has dented oil consumption and brought forward forecasts by energy majors, producers and analysts for when the ...
Motoring
7 months ago

Japan's Honda Motor will launch a new electric vehicle brand in China next year, it said on Wednesday, and will only launch battery electric, ...
Motoring
7 months ago