WATCH | This Ford BBQ bot is the ultimate braai master 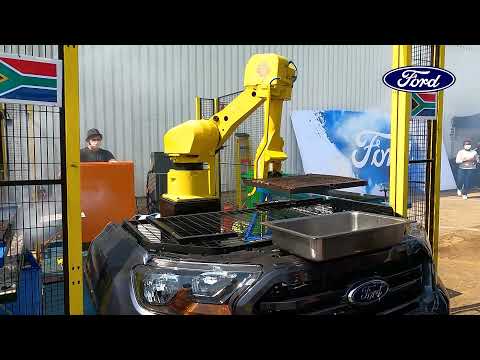 Instead of sending it to the recycler, Ford SA turned one of its decommissioned Silverton Assembly Plant robots into an automated braai master capable of cooking 120 pieces of meat in 12 minutes.

The brainchild of Claude Roux, area manager of the trim and chassis and final (TCF) line, this silent chef (aka TCF BBQ) is programmed to place its grill on one of three braai stations surrounding the unit and turn it after a set time.

“This was when the innovation and curiosity of that ‘small child’ inside all of us came to life,” said Roux. “We took our knowledge of braaing and our understanding of manufacturing vehicles and married the two to create a machine with the ability to pick up and manipulate meat on a grill.

“We decided to use a Fanuc robot due to be disposed of during the extensive Silverton Assembly Plant upgrades, along with scrap metal, discarded wood pallets for a base, metal trolleys for braais and a Siemens Programmable Logic Controller (PLC) for the controls. We had an electrician, fitter, PLC programmer, and a controls specialist working on it for about four weeks during the plant shutdown."

Now something of a celebrity at Ford SA, this unique braai bot is sure to see much use during the festive season thanks to its prowess behind the coals. Some have even speculated that TCF BBQ might appear on a reality TV series.

However, when asked about these rumours the machine was unable to comment.