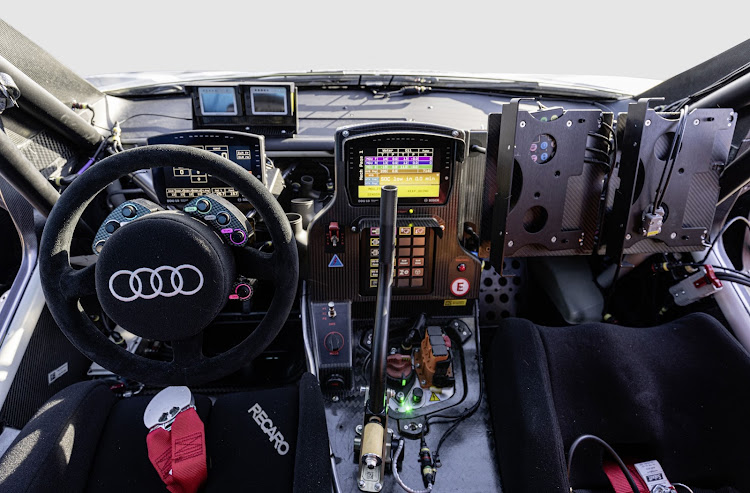 Earlier this year Audi revealed its electric contender for the 2022 Dakar rally. The gruelling competition is set to kick off on Saturday in Saudi Arabia.

The RS Q E-Tron rekindles the off-road motorsport heritage of the brand with a futuristic twist, using electric motors at the front and rear axles, powered by a high-voltage battery, with an internal combustion engine for charging purposes.

Equally fascinating is the cockpit of the vehicle, outlined in vivid detail by the manufacturer recently.

Originally, there was a clear division of tasks in cross-country rallying: the driver drives, the co-driver navigates. These roles have long since changed, as the regulations limit navigational tasks to very precise options and rules. The formerly paper road-book for the track is now digital. And the Audi RS Q E-Tron redistributes various functions between drivers and co-drivers with its operating concept. 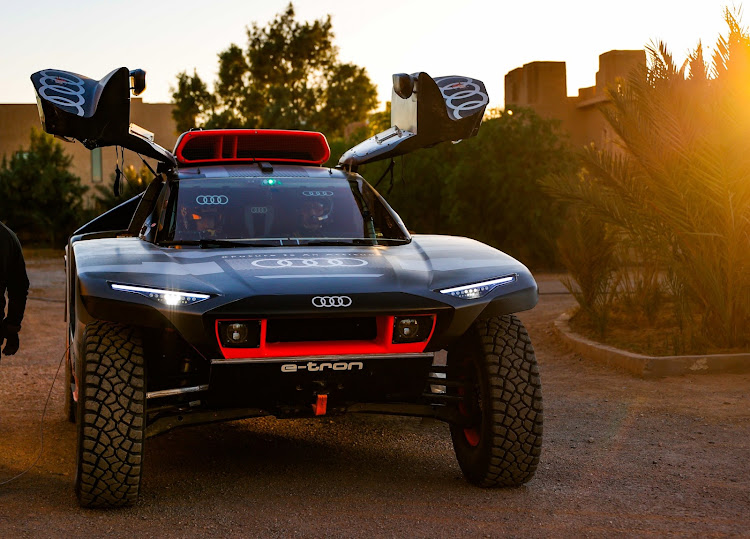 Steering, accelerating and braking will be the main tasks for drivers Mattias Ekström, Stéphane Peterhansel and Carlos Sainz. They no longer have to change gears because the electric drivetrain does not require a manual transmission.

Centrally visible in the cockpit is the double-cranked aluminium handbrake lever. It is coupled with the brake-by-wire system that combines the hydraulic brake with a recuperation system. So pulling on the handbrake helps to recover energy, as does operating the footbrake.

But the essential purpose of the handbrake in rally racing is to induce a slide before corners. The brief locking of the rear wheels forces the car into rotation. This makes direction changes particularly agile. There are eight control buttons on the steering wheel directly in front of the driver. Among other things, they control the horn, the windshield wipers and data entries in the software if the driver wants to store an anomaly with a time stamp in the memory.

The speed limiter can also be activated there for zones in which a maximum speed is prescribed. Behind the steering wheel, a display sits directly in the driver’s lower field of vision. It provides information on tire pressures, the direction of travel selected by the continuously-variable electric drive (forward, reverse or neutral) and the current speed. 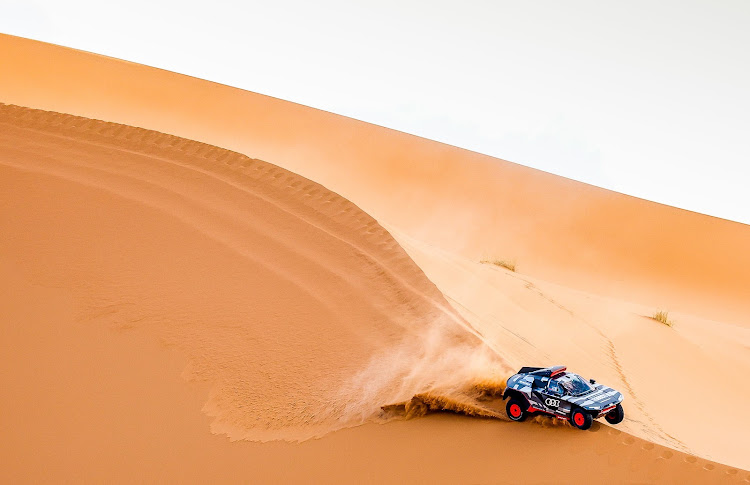 Crushing dunes is what the RS Q E-Tron was built for.
Image: Newspress UK

It also contains important warnings so that the driver can react immediately in the event of an imminent system shutdown or disconnection of the high-voltage battery, for example.

Two small displays mounted above and toward the windshield bring essential information into the field of vision: a so-called repeater on the left shows the compass direction, while the display on the right shows the speed being driven.

A central display right in the middle between the driver and co-driver contains information on tire pressures, the selected brake balance, the brake-by-wire system and many other functions. The information is highlighted in green when a function or system is working properly, or in red when an error occurs. A switch panel is located underneath. The individual keys are touch-sensitive with a pressure point.

Audi has stored various functions on the 24 freely assignable but predefined areas: for example, preselected maximum speeds, which are common in speed limit zones, or the air-conditioning actuation. Different pages can be programmed so that the 24 buttons can be assigned multiple times. 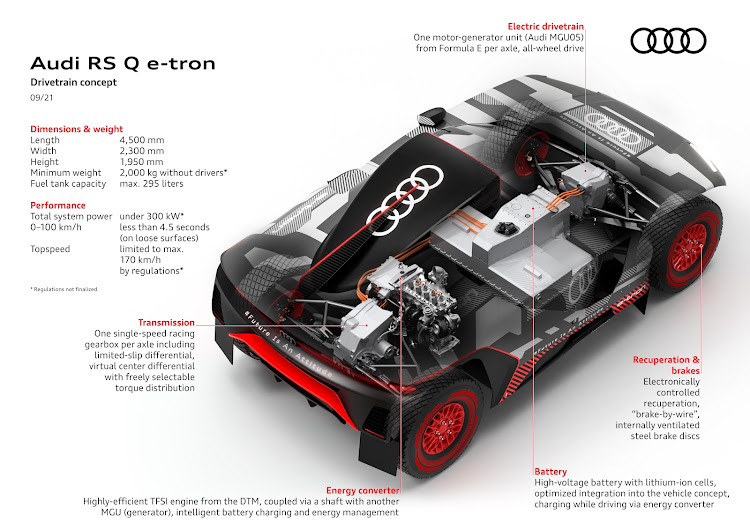 Less frequently used functions can be called upon the rear pages. In the event of damage, for example, individual systems can be switched off there to safely reach the stage destination in an emergency mode. The operation of this switch panel is up to the co-driver; the driver only expresses the corresponding wishes.

All this has to be done as faultlessly as possible in rough terrain at speeds of up to 170 km/h for hours on end. The co-pilot assumes a high level of responsibility in addition to his original main task, which is to navigate.

“I now spend only half my energy on navigation, the other half on operating the car. But I love this new challenge,” says Edouard Boulanger, Stéphane Peterhansel’s co-driver.

The route of the upcoming stage is no longer issued the evening before as in the past. The teams only receive this route information 15 minutes before the start of the stage each morning.

Emil Bergkvist, who shares the cockpit with Mattias Ekström, sees this as an advantage: “As a driver, I come from classic sprint rallying. For me, this is the ideal time to switch to cross-country rallying as a co-driver, because now even the established co-drivers have to get used to these new rules."

The short-notice information on the route as well as the switch to a digital road-book format poses major challenges. To orient themselves in the terrain and at the same time keep to the prescribed route, the three co-drivers Emil Bergkvist, Edouard Boulanger and Lucas Cruz look at two tablet screens that replace the previously paper road-books. 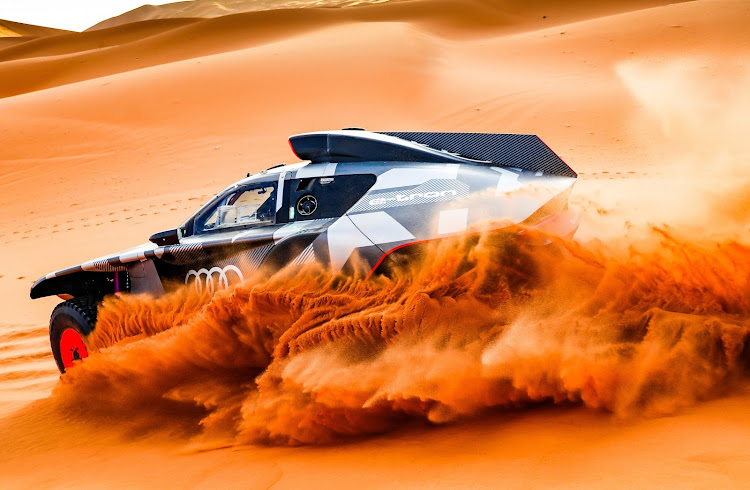 In the dusty heat of battle, it's good to know the vehicle is equipped with air-conditioning.
Image: Newspress UK

They are operated by two remote controls connected by cables. On the screen on the left, the road-book shows the way through the terrain. Only if this tablet should fail are the crews allowed to open and use the sealed paper road-book supplied, otherwise they face a penalty.

The tablet on the right contains the GPS navigation and validates the digital waypoints that each participant must drive to. When the car reaches the radius of a waypoint, the driver also sees the arrows in the right-hand repeater below the windshield, indicating the direction to the waypoint.

The biggest difference to a navigation system in a production car: while the device helps to find destinations as precisely as possible in road traffic, navigation at cross-country rallies should remain a sporting challenge. Alongside the driver’s performance, it determines success and defeat. The organiser only provides compass directions, distances, pictograms, special aspects and hazard warnings in the road-book.

The GPS system in the rally car is therefore deliberately only of limited help to the teams. At the same time, the system serves the organiser as a control instrument. In this way, he can check whether the participants have kept to the route and the speed in speed control zones over hundreds of kilometres in open terrain.

The cockpit is only complete with the Iritrack system in the centre console. It is used for first aid in emergencies. With it, the organiser records the speed, the current vehicle position and can detect possible accidents.

In the event of an emergency, the co-driver can inform the organiser directly whether the passengers are uninjured, whether they require medical assistance or whether the rescue team should help another participant who has had an accident.

Women were not allowed to drive cars in Saudi Arabia until a ban was lifted in 2018.
Motoring
1 month ago

Motorsport icon Walter Röhrl must have had a few thoughts on his mind as he charged up Pikes Peak in 1987 behind the wheel of an Audi Sport Quattro ...
Motoring
1 month ago

The Q5 was a crucial addition to the Audi sport-utility vehicle family. Joining the full-sized Q7, which was their first contribution to the genre, ...
Motoring
2 months ago