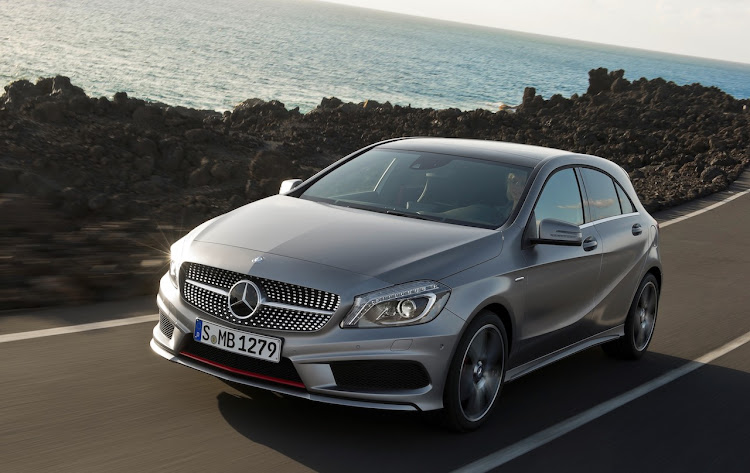 The W176 marked a radical change from its predecessor.
Image: Supplied

Every model lineage has its game-changer. The iteration that heralded a new direction for the breed.

For the Mercedes-Benz A-Class, that step came in the form of the third-generation W176 model. It ditched the pram-shaped, multi-purpose vehicle template of its predecessors and instead took on a more conventional hatchback format, gaining a healthy dollop of stylistic verve in the process.

Finally, the three-pointed star brand had a convincing alternative to its fellow German rivals, the Audi A3 and BMW 1-Series.

At the local launch of the A-Class in April 2013, held in Cape Town, we had an opportunity to chat with designer Mark Fetherston. He cited interesting muses for the model, including the physique of a shark and the ripples in sand dunes.

Lending further credence to his design abilities was that he was responsible for the breathtaking SLS AMG supercar. Sentiment around the striking aesthetics of the W176 seemed unanimous: it was a looker. 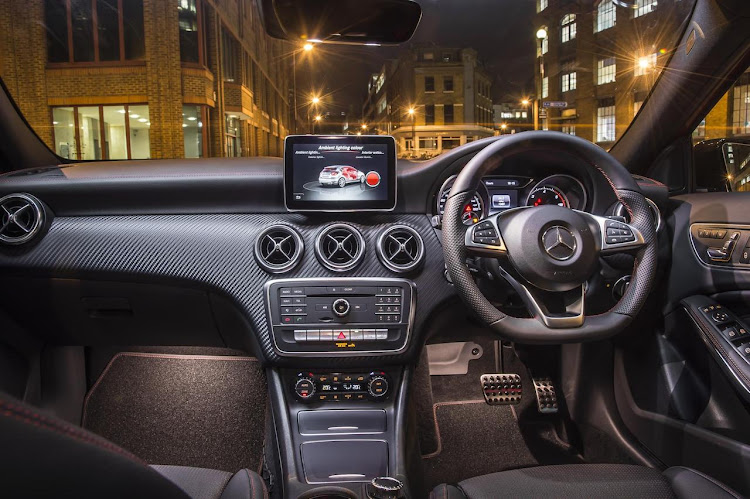 An interior that matched the sporty exterior.
Image: Supplied

Introduction saw the release of five derivatives, with pricing ranging from R275,000 to R395,000 before options. The A180, A200, A180 CDI and A220 CDI wore the Blue Efficiency suffix, which some might recall, denoting a greater emphasis on economy and environmental friendliness.

Indeed, green marketing in the automotive world was still gaining momentum at that time. Transmission choices included a six-speed manual or the seven-speed, dual-clutch automatic option – most opted for the latter of course. And at the top of the pile, before the A45 AMG arrived, was the A250 Sport.

The snug interior might border on claustrophobic for larger occupants. Fascia design and cabin layout matched the pizzazz of the exterior, with turbine-inspired ventilation slots and an upper dashboard said to be inspired by an aircraft wing.

Tactile quality seemed to be among criticisms: it was good, but certainly not in the league of the equivalent Audi A3 of the day, with its abundance of soft-touch materials.

Another gripe expressed by evaluators was the harsh ride quality. Some descriptors were less than flattering, in referencing the overly firm character of the suspension. Perhaps it was a case of poor adaptation: the hard setup might have lent a sporty sense on pristine German asphalt, but the real-world conditions of South African roads revealed deficiencies.

Some testers advised buyers to stick with the smaller alloy options, with plumper rubber sidewalls, for a more compliant drive. Obviously, most preferred the visual swagger afforded by the larger rollers, even if that compromised ride. 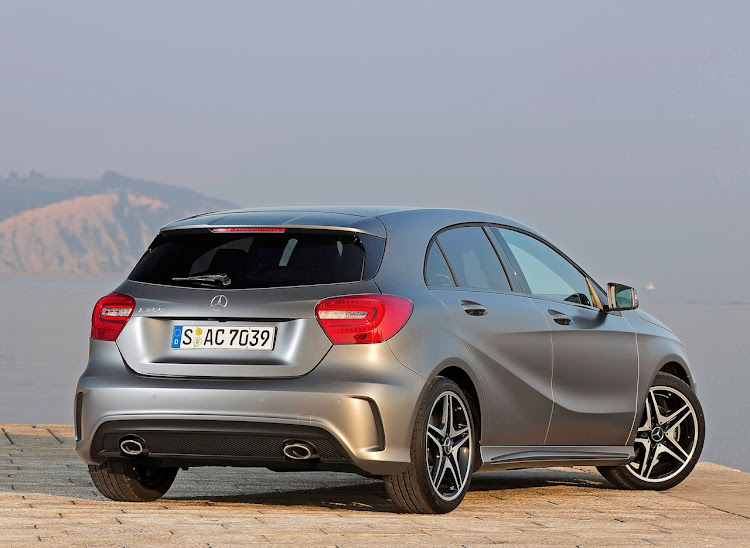 Adding sizzle to the A-Class range was the A45 AMG, which landed in August 2013. It was billed as a hyper-hatch, wielding a mighty 2.0-litre, turbocharged, four-cylinder engine delivering 265kW and 450Nm. That made it the most powerful example of such a configuration in series production, in the world, at that point. It used a seven-speed, dual-clutch transmission and power was sent to all four wheels.

Even by modern standards, the quoted 0-100km/h sprint time of 4.6 seconds is nothing to be sneered at. With uprated cooling, gearbox software borrowed from the SLS AMG and a standard exhaust system that would make the current, meeker crop of performance hatchbacks wince, the baby AMG was a bona fide brute. It came in with a basic price of R599,500. 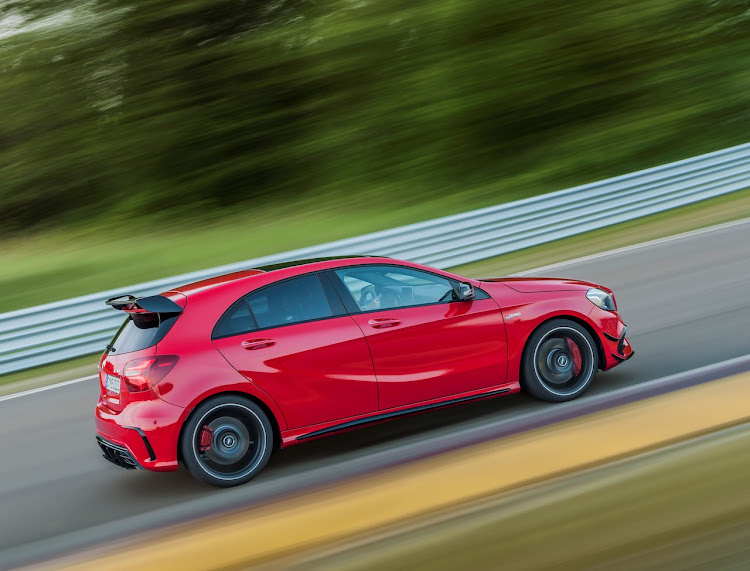 The updated A45 gained even more power.
Image: Supplied

In February 2016 the updated A-Class W176 arrived in South Africa. It gained minor design tweaks, with subtle upgrades front and rear, updated alloy wheel options, additional colours and subtle interior updates which included new trim choices. The company also did not shy away from criticisms about ride quality, which they sought to remedy with the facelifted version.

“As comfortable as never before, as dynamic as always,” was the tagline the brand punted at the launch. Underpinning the claim was the addition of adaptive suspension, with various modes linked to a Dynamic Select button on the fascia, allowing selection between driving modes that would either sharpen or soften the on-road character. The technology was standard on the A220d, A250 Sport and A45 AMG. 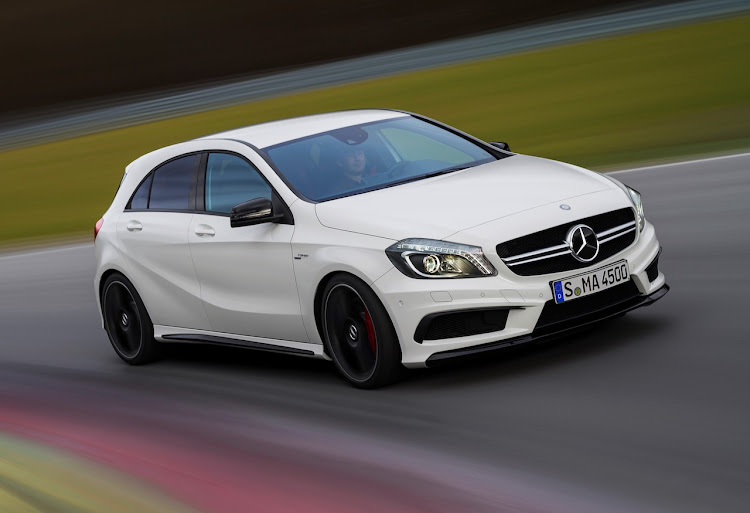 When the A45 landed, it tore up the performance hatch rulebook.
Image: Supplied 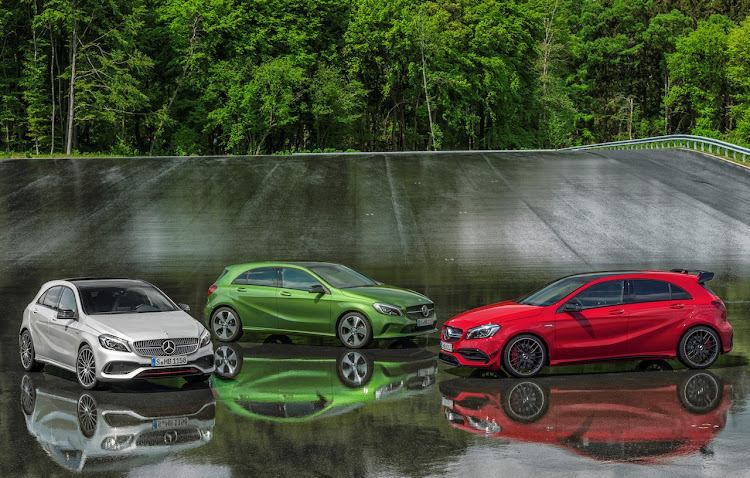 These trade and retail values were provided by TransUnion and its FirstCheck service, which delivers vehicle and customer information in real-time. A note that the values are general and do not factor in the optional extras of each model referenced here, nor the condition of the vehicles.

What to look out for

We approached JF Auto, a Johannesburg specialist in Mercedes-Benz established in 2010, for insight on what prospective buyers should consider when inspecting a potential W176 purchase.

“With regular maintenance and adherence to any lights that may feature on the instrument cluster, vehicles can clock in excess of 350,000km on the odometer,” said operations manager Danelle Fourie.

“The thermostat has an electronic switch, which controls when it opens or closes, with a temperature reading – these can fail and will require replacement,” she said. While doing this, it is advisable to inspect the radiator bottle, which has a tendency to swell and crack.

Pay attention to the oil pipes supplying the turbocharger: leakages can occur, directly onto the alternator, causing failure

Pay attention to the oil pipes supplying the turbocharger: leakages can occur, directly onto the alternator, causing failure. A faulty fan belt tensioner is responsible for noisy operation.

Fourie advises inspection of the timing chain and chain tensioner in the A45, A200 and A250 petrol engines, adding that replacement would be required during the lifetime of the vehicle.

“The chain stretches, causing the engine to slip timing, the cam adjusters can also lose their ability to keep oil pressure, making a noise on cold start – this will cause the ‘check engine’ light to flash.”

The transmission in the A45 has been known to exhibit clutch and gear issues. Examples with higher mileage could potentially suffer from problematic differentials. Have a technician look at the turbocharger transducers, on both the petrol and diesel versions. “This controls the vacuum to the turbochargers, failure results in limited boost.”

Between the two diesel choices, Fourie suggests opting for the M651 motor (A220 CDI and A200d) rather than the Renault-sourced engine from the A180 CDI.

Fourie warns: “The Renault engine is riddled with faults, from faulty injectors, problematic engine control units, problematic turbochargers and in general are a nightmare to work on, as the Mercedes-Benz software struggles to give accurate fault codes.”

“The Mercedes M651 has few issues, the most common is that the diesel particulate filter can block, but this is easily repairable.”

“In general, the electronics on the range are very stable and well designed.”

The F30 designation of the BMW 3-Series left a legacy that will be remembered for a few reasons. Firstly, it was the last example of the breed to be ...
Motoring
1 year ago

News out of the ongoing 2021 United Nations Climate Change Conference (COP26) in Glasgow has been dominated by major countries pledging to reach net ...
Motoring
8 months ago

Over the past five decades the Suzuki Jimny has cultivated a rich heritage. Countless fans locally and abroad will attest to the ability of the ...
Motoring
5 months ago