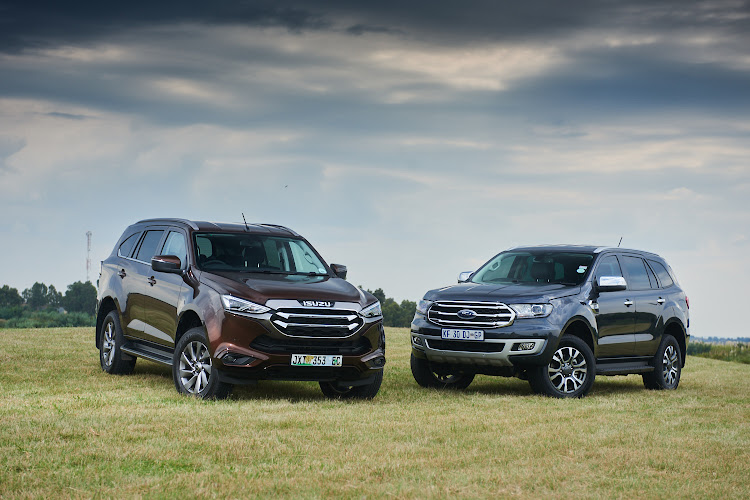 The genre of sport-utility vehicles based on pick-up platforms is regarded by many South African families as the ideal motoring solution. Nameplates like the Ford Everest, Isuzu MU-X, Mitsubishi Pajero Sport and Toyota Fortuner require no introduction.

Sturdy underpinnings and tall ground clearances lend suitability to adventurous pursuits, in addition to a commanding seating position empowering all members of the clan. The option of all-wheel drive is another benefit, as is the versatility afforded by third-row seating, which makes way for commodious luggage space when not in use.

This week we are zoning in on two well-known contenders. The locally-made Ford Everest, while in its twilight months, remains a relevant choice, with proven credentials. Isuzu forged a sound reputation for itself with the MU-X, of which a new generation model was recently launched. 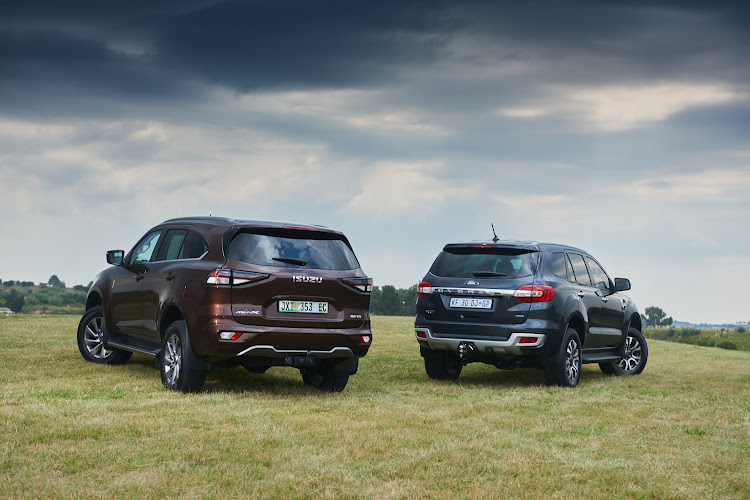 Ford first launched this generation of Everest in 2015, keeping it fresh with customary updates throughout its life  cycle. Its beefy front end has clear kinship with the Ranger; wearing its grille like the shiny buckle on a cowboy belt. The Isuzu takes on a scowling expression, with a vertical slats ending in sharp, fanged edges. Neither could be accused of coming across as ungainly – and would fit right in, whether covered grime on a cross-country jaunt, or washed and in your office parking bay. At the rear, the MU-X boasts smoked tail-lamps, while the faux diffuser elements sported by both are clearly more aesthetic than functional. 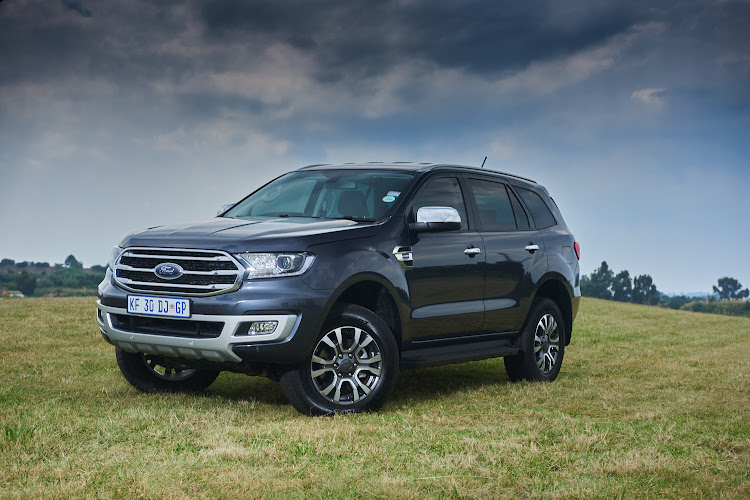 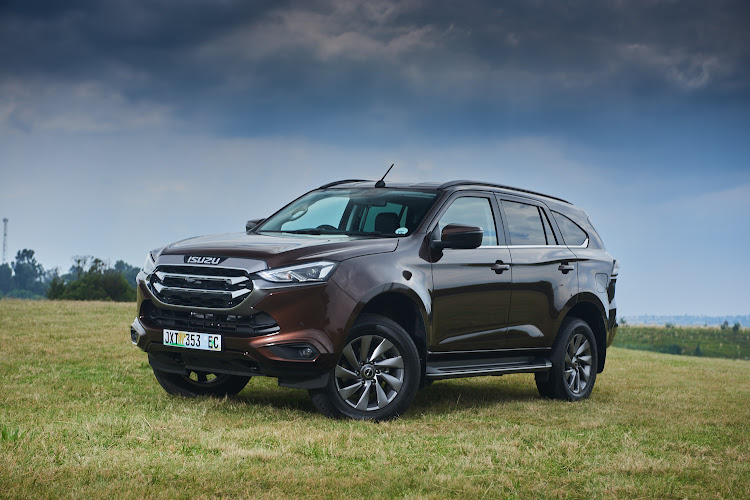 Familiar readers may remember this Ford. Yes, KF 30 DJ GP is our recently-introduced long-termer in our company for the next few months. It is the 2.0 BiT XLT with four-wheel drive and an automatic transmission. New list price is R779,100, one tier below the range-topping Limited for R877,300. The Isuzu MU-X is the 3.0 TD LSE, two-wheel drive, with an automatic transmission, costing R763,300. There is no four-wheel drive option in the LSE, only in the LS, which has a lesser place on the grade ladder, or the high-tier Onyx (R860,500). The four-wheel drive LS will cost you more than the LSE at R771,600. 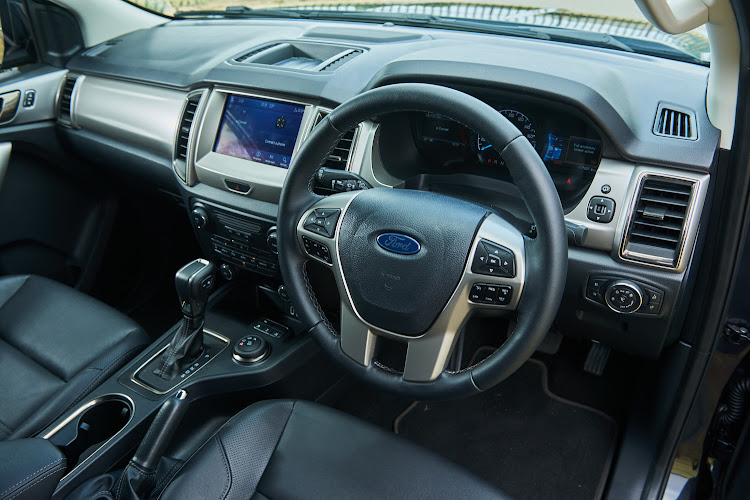 It seems hard to believe the Everest is three years shy of a decade. The cabin of the model still looks and feels contemporary. Tactile quality was never really a criticism before, nor is it on this occasion. Nice-to-touch plastics and soft touchpoints do well to disguise this product owes its roots to a commercial vehicle.

Compared to its predecessor, which took the baton from the Chevrolet Trailblazer, the new MU-X is a significant leap in terms of interior ambience. We liked its supple leatherette upholstery, which extended to the upper section of the dashboard and on either side of the centre stack. Its layout is modern, with novel details such as a row of silver switchgear resembling the keys on a piano.

The nine-inch touchscreen is (literally) an inch larger than that of the Ford. But it is bested by the overall display, capability and overall ease-of-use offered by the Blue Oval SYNC3 system, comprising navigation and voice control, which the MU-X does without. Another ace for Ford is the integration of a smartphone-based application, allowing for remote starting, temperature pre-programming and more. Both vehicles’ infotainment setups support Android Auto and Apple Car Play, both have keyless-entry and start functionality.

Standard amenities in either includes a reversing camera, steering-mounted audio controls, cruise control, Bluetooth and climate control. The audio system in the Ford is a 10-speaker system, with eight in the Isuzu. While the MU-X LSE has blind-spot monitoring and rear cross-traffic alert, the Everest XLT does not.

The basics of anti-lock brakes, electronic brake-force distribution, electronic stability control and traction control are covered in both models, as are seven airbags. When ANCAP tested the Everest in 2015, it earned five stars. The MU-X received five stars from the organisation in 2020. 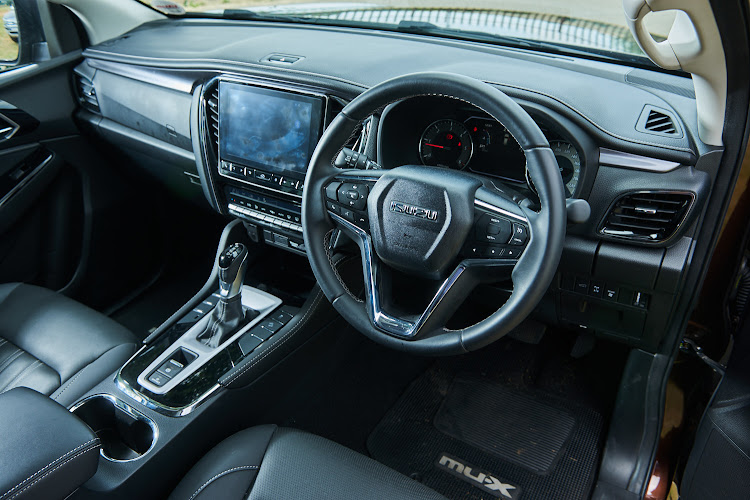 Quality has improved dramatically in the MU-X.
Image: Waldo Swiegers

The steering in the Isuzu is comparatively heavier than the tiller in the Ford, a characteristic most noticeable around town, or while parking. We had tempered our expectations in the ride quality department. Our reference was the truly woeful nature of the Mazda BT-50 we tested on two occasions last year, a vehicle that shares the same basic platform.

Luckily, the on-road tuning of the Isuzu appears to have absolutely nothing in common with the jittery nature of the Mazda. It is well-resolved, though a touch firmer than the Ford, employing a five-link coil rear suspension. But the Ford is the original pioneer of car-like comfort in this arena and its ride quality, also reliant on coils, did not disappoint. In addition, it has the advantage of a Watt’s linkage, suppressing lateral movements for jitter-free progress.

The wheel and tyre sizes of our vehicles are identical: 265/60/18 but separated by brand. Continental Cross Contact LX rubber was worn by the Ford, while the Isuzu used Dunlop Grandtrek AT25 tyres. 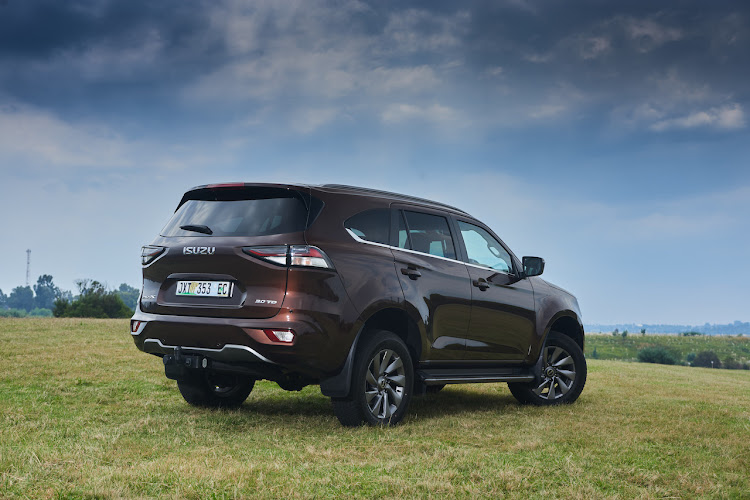 A tow-bar encourages full use of the 3.0-litre motor.
Image: Waldo Swiegers

Both vehicles are powered by four-cylinder, turbocharged-diesel units. The Isuzu has a larger displacement: 2,999cc. Power and torque outputs are down compared to the Ford, at 140kW and 450Nm, but the motor seems to break less of a sweat on the daily grind. It felt superior in tractability – but we should remember, in fairness, that a sprightlier feel from the two-wheel drive car is to be expected.

Some would describe the 1,996cc engine of the Ford as highly-strung, making use of two turbochargers to deliver 157kW and 500Nm.

On paper, that looks promising but in the real world the quoted output seems ambitious.

We found ourselves being judicious with the accelerator pedal so as not to provoke the thirst of the engine and wondered on many occasions if the single-turbocharger version would make better sense. The transmission in the Everest is a 10-speed automatic, with a six-speed in the Isuzu. There was no denying the greater alacrity of the former setup, dispatching changes almost imperceptibly.

While both vehicles were outfitted with tow bars, it was definitely the Isuzu that would have earned our vote if trailer duty were required. The MU-X has a towing capacity of 750kg (unbraked),3,500kg (braked) and a payload of 657kg. Same goes for the Ford on the towing front, but it claims to have a payload of 750kg. Our time with the vehicles was spent on the road, with one brief stint on an untarred section. In the engine department, the 3.0-litre motor of the Isuzu offers more muscle than the 2.0-litre heart of the Ford. Its interior looks a lot fresher, while quality is by no means of a lesser standard than what is served by the Blue Oval.

The gap between the current, outgoing Ford Everest and its peers was always significant. But this new MU-X closes that chasm considerably, upping the ante in all areas, most crucially refinement, quality and on-road comfort. For that achievement, we can give it the winning rosette in this comparison. It is baffling, however, that there is no all-wheel drive option with the LSE – and that the manufacturer is charging buyers more for it in a model with lower specification.

As for the soon-to-be replaced Ford? Well, it would be tough to recommend paying new list price when its successor is just around the corner. We would steer you towards the direction of an example not older than two years for maximum value.

Ask any seasoned motoring scribe about their first Chinese car experience and the story is likely to be an amusing one. Early examples hailing from ...
Motoring
3 weeks ago

This month Hyundai launched its scintillating new high-performance N-division offerings in the country. The i30 N, now with a dual-clutch ...
Motoring
3 weeks ago

From bakkies and people-carriers to budget hatchbacks and SUVs here is a long list of some of SA's most popular vehicles and how much you'll spend ...
Motoring
2 weeks ago