Five things to know about the powerful EcoBoost Ford Ranger 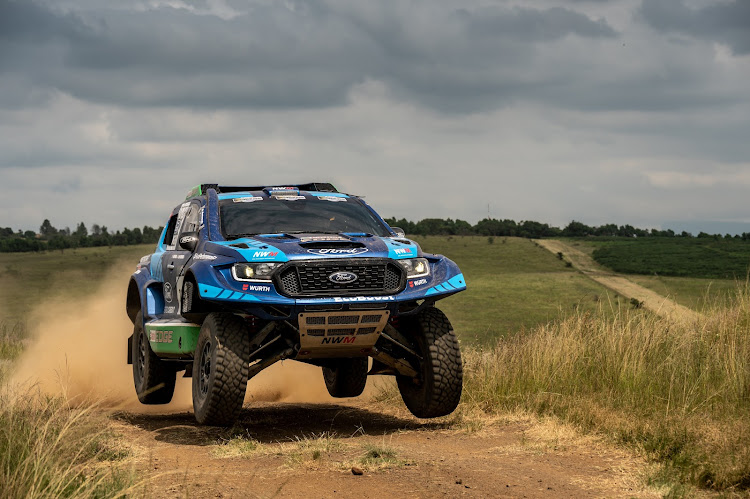 The partnership between Ford and Neil Woolridge Motorsport (NWM) spans more than 25 years, with many local and international cross country race victories and championships won along the way.

Having already built and raced 15 production-based Ford Rangers in previous years, in 2011 the collaboration was stepped up when NWM was commissioned by Ford Global Product Development in the US to build the latest generation Ford Ranger for rally-raid competition around the world. It was based on a purpose-built tubular spaceframe chassis and powered by a Mustang-derived 5.0l V8 engine.

The V8 NWM Ranger competed successfully around the world, and in 2021 was superseded by a new generation Ranger with a twin-turbo 3.5l  EcoBoost V6 engine.

In 2022 the benchmark was raised even higher as the new FIA T1+ regulations were implemented, introducing wider dimensions, much bigger wheels and longer travel suspension for the four-wheel drive cars. The NWM team delivered a true beast of a machine in the mighty T1+ EcoBoost Ford Ranger.

1) Built in Pietermaritzburg for the world

From its production facility in Pietermaritzburg, KwaZulu-Natal, the Neil Woolridge Motorsport team designs, develops and builds the rally-raid Ford Ranger to compete in the SA Rally-Raid Championship (SARRC) and around the world.

The spaceframe chassis, passenger cell and roll cage of the NWM Ranger is manufactured inhouse. There is 150m of aircraft-grade chromoly tubing – a high-strength but lightweight alloy steel made of chromium and molybdenum - in a a single NWM Ranger – equivalent to the length of three Olympic swimming pools. Furthermore, 15kg of welding rods and 10kg of chassis paint is used in the build for each vehicle.

The 3.5l EcoBoost V6 engine is supplied by Ford Performance in the US and has peak outputs of 300kW and 600Nm.

BOS suspension in France supplies the shock absorbers and springs. The massive 76mm diameter single dampers on each corner of the NWM Ranger were specially designed for this vehicle and provide up to 350mm of wheel travel, making it possible for the NWM Ranger to tackle the harshest terrain in its stride – and at astonishing speeds.

Rally-raid competition, and specifically marathon-style events like the Dakar Rally, is characterised by long stage distances in punishing terrain.

Day eight on this year’s Dakar saw the teams drive a total of 830km for the day, including 395km of racing. With refuelling only allowed at designated points during the liaison, the cars have to carry hefty fuel loads. Accordingly, the NWM Ranger is equipped with a massive 480l  fuel tank.

It has been successful locally and overseas, notching up 50 wins in SA, including Class T championships in 2018 and 2019 with Lance Woolridge driving and Ward Huxtable navigating.

The new EcoBoost-powered Ranger debuted at the start of the 2021 with Lance and new co-driver Elvéne Vonk scoring a debut victory at the Mpumalanga 400. Gareth Woolridge and co-driver Boyd Dreyer followed this with a solid podium finish for the new T1+ Ranger at the same event in 2022.

The NWM Ranger's overseas successes include four consecutive victories in the eight-day Rally dos Sertões in Brazil to go with wins in Hungary, Poland, Portugal, Australia, Spain, Czech Republic and the Morocco Desert Challenge. NWM Rangers also competed in the Dakar Rally from 2014 to 2018.

Double Formula One world champion Fernando Alonso has two key pieces of advice that have stuck with him over his decades-long racing career.
Motoring
1 month ago

France's Sebastien Loeb won the season-opening Monte Carlo Rally on Sunday to become, at 47, the oldest driver to win a round of the world ...
Motoring
5 months ago