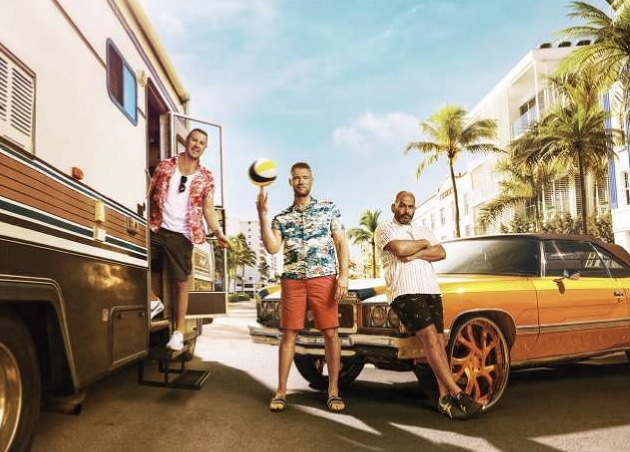 In their sixth series at the wheel of Top Gear, Freddie Flintoff, Chris Harris and Paddy McGuinness hit local screens this week. The 32nd season of the iconic motoring show launches on June 23 at 8pm on BBC Brit, DStv channel 120.

Season of season highlights you can look forward to include an American road trip, driving heavy goods vehicles (HGVs) and reviews of the new Maserati MC20 and Rivian R1T.

We got the inside scoop on the forthcoming series from McGuinness.

Did you enjoy the opportunity to be back on the road for this series of Top Gear?

Absolutely. We've been in this pandemic for the past few years and in and out of lockdowns. Just to go somewhere like the US and have a road trip was the best thing ever. Everyone had a brilliant time. It had a really good feeling about it because we had not done it for so long. We laughed a hell of a lot,  and I think that's the beauty of us three. We laugh off camera as well as on camera. We get on really well. Long may it continue.

What did you enjoy most about the US  road trip?

I love Americana. To be out there and visiting different places was fantastic. We started in Miami and worked our way up to the Everglades and then to Naples and beyond. You can drive a short distance out there and it feels like you're in a different world. Miami is very cosmopolitan, and then you go an hour up the road and it's all [former US president Donald] Trump flags. But no matter where we went, everyone was lovely to us.

Did you dress accordingly wherever you went?

Yes. Every race we did was in a different area of the US, so we added e local flavour each time. When we were in Miami, we dressed up in full Crockett and Tubbs. We had a Miami Vice vibe that really suited it. Then we went up to the Everglades and we were dressed in the vests and the jean shorts. We crammed a lot in. It was amazing. It was another moment where I thought, 'Wow, I'm so fortunate to be able to do this'.

Talk us through the episode where you drive (HGVs

The producers got us to take our HGV licences. Even now, when I'm on the motorway and a big artic drives by, I think, 'I'm qualified to drive one of those'. Doing Top Gear, I've done lots of races, so I can get my head around the speed and the track and everything else. But this was totally alien for all of us to be in a vehicle so big and so powerful. When you put your foot down, you're going at 160km/h plus. What made it even harder was that we were right in the middle of a big storm. They said nobody should go out on the road and we were hurtling around in these high sided HGVs. It was a thrilling thing to see in the flesh, but I feel glad to have survived that one.

What can you tell us about the episode where you try to find suitable cars for modern cop shows?

Being brought up in the 1970s and 1970s, TV was a steady stream of cop shows like Starsky and Hutch, The Sweeney, Minder, Knight Rider and Morse. In a lot of programmes in those days, the cars were always the stars. I remember not really knowing much about Starsky and Hutch, but really loving their car. This was another one of those moments where we thought 'We are so lucky to be involved in this'. The producers brought back all these classic cars from the TV shows. So we had Morse's actual Jaguar, Starsky and Hutch's Gran Torino and the Miami Vice car. We talked about each show and each car, and then we had the chance to come up with our own cop alter-egos.

He was called Dirty Cobra. It was a cross between Dirty Harry and Cobra. He was a cop who operated outside the law. He was going to be a cross between Dirty Harry and Lethal Weapon, but the producers didn't like the name Dirty Weapon. I got a bloody big American Hellcat. It was so powerful that you couldn't transfer any of the power onto the road. It was a bit of a 'suck it and see' thing with our cars. We had to try and read cop situations and see if our cars could cope with them. But you'd have to obviously watch the episode to see what happened.

Would you ever fancy taking on any of the challenges that Fred does, like driving a Sinclair C5 down a bobsleigh run?

No. Obviously, Chris and I don't do all the challenges Freddie does because we are rational humans. The producers don't even put them to us. I think they just have a pile on the desk, the Freddie pile, of stuff most people wouldn't even think of doing. To be fair to Fred, I've never seen him turn anything down. He always gives it a go.

Why does the chemistry between the three of you work so well?

We don't have to try very hard. When you look at people who been put together by a producer or a commissioner, it doesn't always work. You can see that straight away. But with us, even when we did our taster day way back when we first got the gig, it worked from the get go. When we argue with each other, it can be quite dark and near the knuckle. But we always know when one of us needs a bit of time. We are quite sensitive to that. We take the mickey out of each other a lot, but if one of us is having an off day, he gets left to it.

What do you love about working on Top Gear?

It's opened up a lot of things to me. Having these experiences around the world rounds you off. Swamp buggy racing, oval racing with police cars and The Wall of Death are all things I would never have volunteered to do. But whenever I do them, I always think, 'wow, that's incredible'. Already the producer has been chatting to me about some stuff for the next series. I was thinking, 'that sounds a little bit tricky'. But   it keeps you on your toes.

Top Gear is now in his 32nd season. Why do you think it remains so popular?

The British public have a bit of a perverse sense of humour and we like seeing people out of their comfort zone on the telly. In the days of Clarkson, Hammond and May, they would be in Vietnam in vests, no sleep, sweating, having a horrendous time. It's really amusing seeing that happen to people. It's the same with Chris, Fred and me. People like it when we are pushed out of our comfort zone. But they also like it when in the end we prevail.

Do fans all over the world come up and talk to you about the show?

Yes. When we were out in America, some guy stopped me in the Everglades and started talking to me about the series. That blew my mind because he was a full-on Everglades guy in a cowboy hat. He was saying, 'hey, boy',  that kind of vibe. He was talking to me in depth about stuff we had done. He was the last guy I thought would be talking to me about Top Gear, but the show obviously travels well and people really enjoy it. That's the beauty of it.

Soon to come to Mzansi, the high-performance pickup is taken through its paces
Motoring
2 weeks ago

For any new car owner, the first real failures, not just niggling imperfections but genuine failures of his pride and joy, are always the most ...
Motoring
2 weeks ago