The highs and lows of my dad's old Ford Sierra 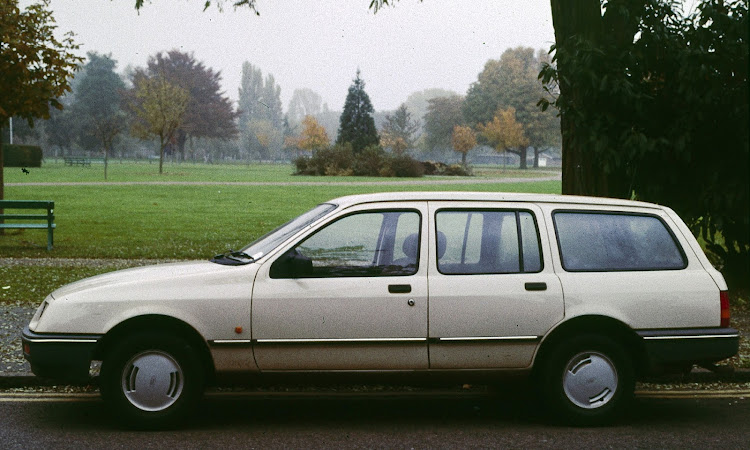 Not the author's dad's Ford Sierra Station Wagon but one very much like it.
Image: WikiMedia Commons

My old man didn’t own very many cars during his life and most of them — aside from the silver 1980 Porsche 911 SC I inherited after he died in 2014 — were unremarkable at best.

Though at the time he thought his Ford Sierra station wagon was the pinnacle of modern automotive design: a sleek piece of four-wheeled futurism that offered practicality and panache in equal measure. I can still remember the day he bought it home.

I must have been about four years old at the time and the sight of this huge white spaceship-on-wheels floating down the driveway was mightily impressive. The real kicker, however, was this wagon’s interior that featured a massive boot for stowing boxes of shoes (my dad owned a shoe shop back then), canines (two Alsatians) and — when he allowed it — his son.

Maybe it’s a boy child thing but being allowed to travel in the “dog box” on drives around town was the ultimate thrill. Especially since there were speakers mounted in the hatch, meaning that I was closer to the music that was never in short supply when my dad was behind the wheel.

As was de rigueur in the 1980s, the Sierra came with a radio-cassette deck mounted in front of the rubbery gear lever. Though there was no air conditioning (an omission that my father lived to regret) there was an armrest between the front seats that flipped open to reveal a space specially tailored to hold a dozen or so tapes.

Some were complete albums purchased from the old Hillbrow Record Centre — The Cars, Talking Heads, UB40, The Police — while others were homemade compilations scrawled with indecipherable adult handwriting.

On longer jaunts I was of course made to sit in the front passenger seat where I could watch the world go by and take stock of the city in which I lived. I’d usually fall asleep on the trek out to Pretoria — to visit his second store — but when I didn’t I remember gazing out over vast stretches of blurred veld that has since morphed into indistinguishable sprawl.

Before the decade was up my parents split up and I moved to the Cape with my mom as she worked out what to do with the rest of her life. When I started turning into a problem child I was sent back up to Johannesburg where my dad and his miniature cricket bat (aka Mr Barrington) could bring me back in line. The Sierra was still around (despite being T-boned by a lady who had jumped a traffic light) and in it I began a new chapter of my childhood life.

Cricket ruled my waking hours back then and that boot I’d once enjoyed riding in was now being crammed with tog bags bursting with bats and balls and pads and other assorted paraphernalia.

Meanwhile, the space in front of the dashboard had turned into an impromptu ‘debriefing room’ where, after storming off the field after being dismissed for yet another duck, my dad would shout about the importance of sportsmanship on the painfully long drive home.

“I don’t care what you think — you make damn sure that you shake the winning team's hands when the game is over! If I ever see you not shaking hands again, boy, you’re going to get the hiding of your life.”

And of course I did. I’ve always been a terrible loser and as my father was self-employed for the entirety of his adult life (“Tom, like, does your father have a job?”) his Ford Sierra was a permanent fixture of pretty much all my school cricket matches.

The 1990s proved a tough time for my dad. His shoe business collapsed and for months he struggled to find a consistent income stream. Eventually he created his own gig making scale models of buildings for use in TV commercials and print adverts: intricate constructions that took weeks to build in our garage.

The finished product would then be broken down and transported to the studio in the back of the Sierra, which was now looking and feeling somewhat worse for wear. And yet somehow it kept rumbling on.

An engine rebuild courtesy of a local Melville mechanic helped, as did a new radiator and a couple of interior rivets that did a sterling job at better securing the plastic door panels that had started to rattle incessantly (legendary Samcor build quality). However once the velour headlining collapsed a few years later it was clear that the Ford now affectionately known as the “Bedouin Tent” had to go.

After tracking down a used Opel Astra Estate, a deal was struck with my uncle who was at the time living with an ex-junkie (supposedly) friend of his up in this glorified flophouse on Third Avenue. A token amount of money was exchanged — in the region of R15,000 if memory serves correct — and promises were made about how he would restore it to its past glory.

Of course this never happened and we would soon see the Sierra in the school-run traffic with an ever-growing list of issues. A shattered headlamp. A window patched with a bin bag. Yet another hubcap missing. Eventually it one day disappeared under dubious circumstances.

My uncle claimed it was stolen (predictably he had no insurance) but my dad later discovered that he had disposed of it for some quick cash that was immediately squandered on various illicit substances. But that’s a tale for another time.

The rise and rebirth of Formula One

I never bothered about F1. Which is strange because I love motorsport. I used to watch it religiously back in the 1990s but in recent years I'd ...
Motoring
6 months ago