Mercedes 130 was a ‘people’s car’ pioneer

Even straight-cut Mercedes-Benz has released stranger things seemingly from the motoring upside-down, like this bug-shaped, rear-engined Benz from 1934 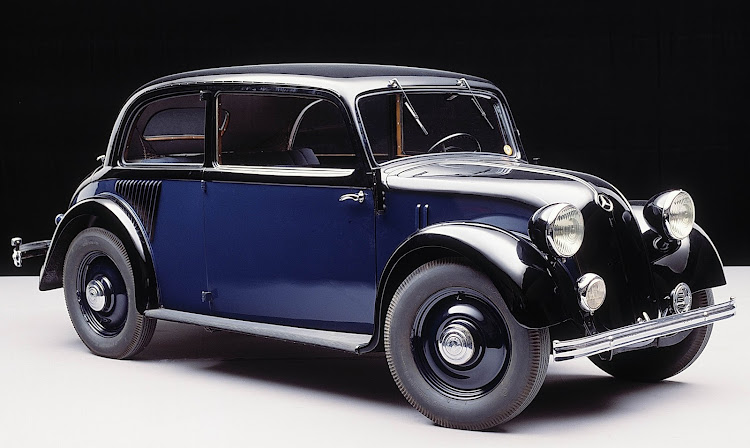 The W23 130 beat the Beetle in arrival date, not sales.
Image: Supplied

Every manufacturer has a section in the archives for quirky and lesser-known creations. Those weirdos in the more arcane passages that you are not likely to see celebrated and lusted over by conventional aficionados.

Think along the lines of the BMW Isetta, Audi A2, Volkswagen Kübelwagen: lovable oddities, sources of fascinating trivia, very rarely seen in the flesh. Even a brand as straight-cut and serious as Mercedes-Benz has released its share of stranger things seemingly from the motoring upside-down.

While everybody can appreciate the dainty elegance of a W114 or the intimidating but regal flair of a W126, you are not likely to hear ardent fans waxing lyrical about a little product known as the W23 130.

My curiosity was certainly piqued while watching a Mercedes-Benz documentary on YouTube the other day. The 130 of 1934 had two doors, a rounded tail, bug-like circular eyes, with an engine in the rear. Basically a Mercedes-Benz Beetle, was my first thought. Or rather, the Volkswagen Beetle (production began in 1938); was very much like the 130...

At this point, it would be remiss to ignore the existence of the Tatra range from the same era, spearheaded by the 77. The Czechoslovakian manufacturer pioneered rear-engined, teardrop-shaped vehicles, with design and engineering led by Hans Ledwinka, who apparently dined with Adolf Hitler on many occasions.

The story goes that Ferdinand Porsche, commissioned to lead the charge on the development of a “people’s car”, had borrowed the idea for the Beetle from Tatra’s Ledwinka. Well, maybe not borrowed per se, as an ongoing legal debacle culminated in a 1m Deutsche-Mark settlement from Volkswagen to Tatra in 1965.

Though the compact, rear-engined, rear-wheel drive Tatra idea itself was derivative of sketches in 1925 by Hungarian engineer Béla Barényi, whose incredible list of achievements includes inventing the crumple zone. Interestingly, Barényi joined Daimler-Benz in 1939 and worked there until 1972, credited as a pioneer of various safety features now ubiquitous today.

Also crucial to mention that Ferdinand Porsche worked as technical director at Austro-Daimler from 1906, then at Daimler Motoren Gesselschaft from 1923, leaving in 1926 when the company merged into Daimler-Benz. Apparently there were disagreements over his proposed idea for a compact, light Mercedes-Benz.

But it would seem as though the idea was launched in his absence when the 130 came about eight years after he left. Hans Nibel was technical director at the time. One of the inspirations for the 130 had also been the Rumpler Tropfenwagen of 1921, with its streamlined and rear-mid engine layout. Tropfenwagen translates into “drop car” — inspired by the raindrop shape.

Nibel used the Rumpler’s chassis for Mercedes-Benz’s Tropfenwagen racing cars of that period. Against the context of the Tropfenwagen, Barényi blueprint, Tatra and Porsche entanglement, the W23 execution was probably not a stroke of coincidence.

It was unveiled to the world at the 1934 Berlin motor show. “At the time of its presentation it was not only the smallest production passenger car, the first rear-engine car and the first four-cylinder model from Daimler-Benz AG, but also the first volume-produced German rear-engine car, leaving aside various micro cars,” according to the manufacturer.

Because there was no engine in the front to cool, it did without a traditional grille, a stylistic cue that kind of puts one in mind of what we are seeing from contemporary electric vehicles. It was available as a two-door with hardtop and convertible options.

An article in Motor und Sport had this to say of the aesthetics: “Those who perhaps harbour a dislike for the vehicle’s exterior, because it deliberately sets a revolutionary idea against hitherto traditional formal elements, will be forced to recognise its certain future supremacy as soon as they take a ride in it.”

At the rear, its 1.3-litre engine produced 19kW, with a claimed top speed of 19km/h. A three-speed transmission with overdrive, hydraulic four-wheel brakes were among other highlights. In the course of development, engineers expressed concerns over the vehicle’s handling characteristics. 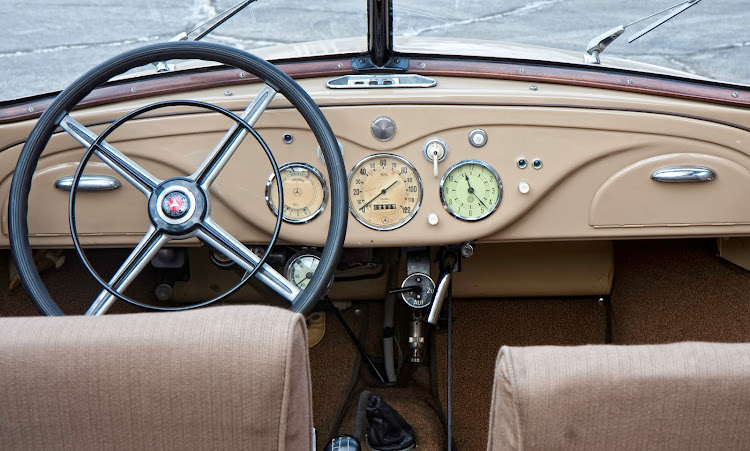 A standard heater was a highlight in the W28.
Image: Supplied

Designer Josef Müller’s diary notes are quoted in a historical release. “The birth defect of the swing axle had a greater than expected impact in combination with the excessive rear-end weight.”

“Nevertheless, after carefully tuning tyre and spring softness between front and rear axles and solving the noise problem, we succeeded in creating a serviceable vehicle out of what was initially a rather stubborn mule.”

This excerpt from a pre-production drive by journalist Joseph Ganz makes for interesting (and somewhat amusing) reading: “But once one has overcome any feelings of disquiet caused by the sensation of floating the car, or the manner in which its rear end struggles to get round corners, and one then compares this car with any other front-engine vehicle, you will without doubt come down in favour of the MB 130.”

It was a different time, of course, well before the advancements in suspension and steering technologies we enjoy today. By 1935 the model received upgrades, including added instrumentation, carpet mats and additional ventilation slots. Mercedes-Benz wanted to expand its compact, rear-engined family, and in 1934 it took the wraps off the 150 Sport Saloon.

Six were built to trial in competitive exploits and their whereabouts remain unknown today. It was a mid-engined creation, with a 1.5-litre engine producing 40kW. A year later the 150 Sport Roadster was revealed at the Berlin motor show, using the underpinnings of its fixed-top sibling minus the ceiling. 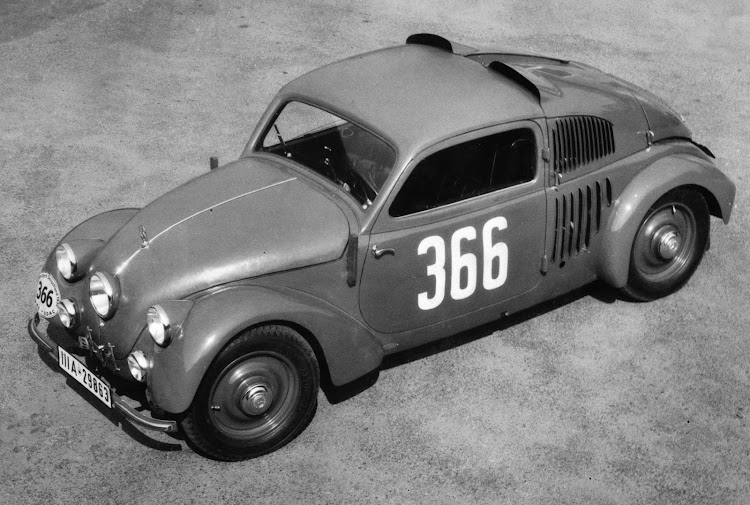 No it's not a Beetle. Of these six 150 Sport Saloons built, none are known to have survived.
Image: Supplied

“Records vary as to the exact number of units produced,” according to Mercedes-Benz, with one production statistic claiming 20. A single example survives and is owned by the manufacturer.

The W28 was an evolution of the W23. It was dubbed the 170 and this time, its rear-engined status was officially denoted by an “H” at the end of the title: “Heckmotor”, meaning rear engine. It debuted in February 1936 and apart from having a larger, 1.7-litre displacement (28kW), it boasted a host of chassis revisions.

This seemed to make for slightly less ambiguous reportage from the press. “The handling of the 170 H is supported by a very acceptable top speed and highly satisfactory acceleration,” read an excerpt from Allgemeine Automobil-Zeitung.

“Top speed over the flying kilometre, recorded as an average of four runs, was 111.4km/h, while a speed of 70.6km/h was achieved over one kilometre with a standing start.”

Ultimately, much like the 130 that preceded it, the 170 H didn’t sell in the volumes the manufacturer had hoped. The more conventional, front-engined 170 V overtook it by a significant margin. While 1,507 examples of the rear-engined car were made, the other model recorded a production run of 67,579 units.

“For those who could afford one and had access to fuel rations, the 170 H model was a sought-after vehicle during the Second World War, because it was not one appropriated by the Wehrmacht,” the company explained.

“The army considered rear-engined cars to be unsuitable for their purposes — though this was before the Volkswagen-based Kübelwagen began its wartime career in Africa and Russia. But this fact also helps explain why such a relatively large number of 170 H models survived the Second World War and why it was one of the few vehicles available for civilian use.

“But it was all to no avail, when more advanced concepts finally caught on, many of these very special Mercedes-Benz rear-engined vehicles ended up on the scrapheap — and very few survived.”

Today, you won’t find rear-engined options in the Mercedes-Benz compact car line-up, populated by the likes of the A-Class and its various offshoots. But let’s not forget the existence of the Smart ForFour, which had a short run in the local market. This Renault Twingo doppelgänger is the closest thing (in spirit) that you’ll find to the mandate of affordable, rear-engined transport as envisaged by the original 130.

The most expensive car sold at Saturday’s international classic car auction at Montecasino was a rare 1968 Ferrari 365 GT 2+2, which was snapped up ...
Motoring
1 month ago

13 Fast Volkswagens without a GTI badge

The annual Cars in the Park show for classic and special-interest vehicles is back at the Zwartkops Raceway near Pretoria on July 31, after a ...
Motoring
1 month ago