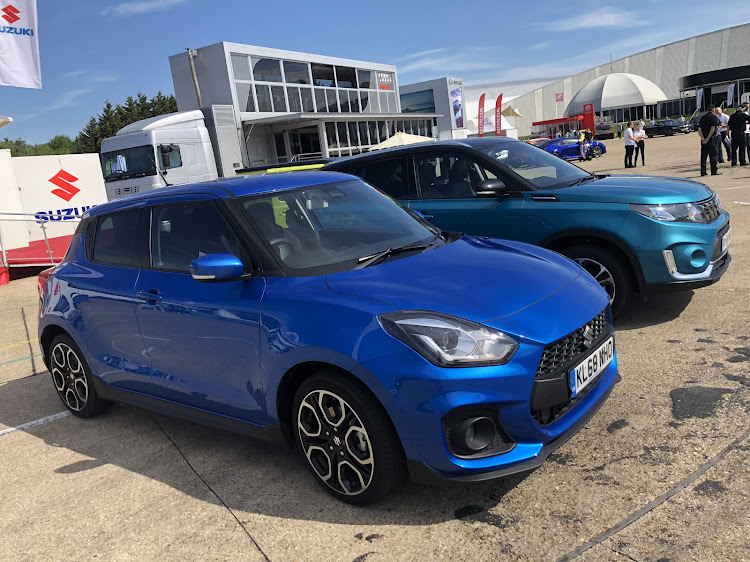 The Suzuki Swift Sport and Vitara Turbo are heading to SA in August. Picture: MARK SMYTH

Fans of the Suzuki Swift Sport will be excited to know that it is finally coming to SA in August. It’s been a long wait, including some uncertainty over whether it would come at all. But will the wait be worth it?

We’ve just driven it at the Millbrook vehicle testing facility in the UK and like previous generations, it’s not about power. The new Sport dispenses with the old normally aspirated 1.6 and gets a 1.4 turbocharged Boosterjet engine producing just 103kW and 230Nm of torque. That’s way off rivals such as the Volkswagen Polo GTi and Renault Clio GT, but while Suzuki SA has not yet released pricing, hopefully not being in the same power league means you shouldn’t be paying a power price.

What the Swift is about is handling and fun, it’s about having the most driving enjoyment in a package that is well equipped and is as good driving to the office as it is hurtling through a series of twisty bends. The latter is exactly what we did on Millbrook’s technical hill course, a route that has tight turns over blind crests, dips that test the compression of the suspension and your spine, and plenty of opportunity to play with the short-shift six-speed manual gearbox as you dispense with bend after bend.

Sprint time figures aren’t going to excite everyone with a 0-100km/h time of 8.1 seconds but in this environment the Swift was brilliant, holding its line in the bends almost like a sports car but without feeling too firm.

The steering is a little jerky as though there is a millisecond of thought before responding to your inputs but feedback from the road beneath is excellent. It also felt more comfortable than the last generation and like its predecessor it has a great driving position, making you feel more in control. 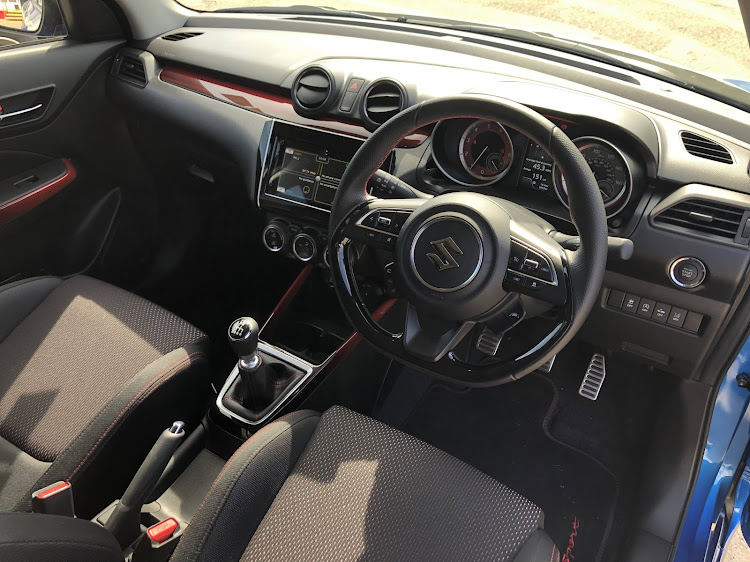 The interior of the Swift Sport has a more athletic vibe than regular models, with a much higher level of equipment and an excellent driving position. Picture: MARK SMYTH

You get a sportier interior trim than the usual Swift models and a touchscreen infotainment system, allowing you to stream your favourite tunes while hustling through those bends. The seats are sporty although they could probably do with slightly stronger side bolsters if you are going to chuck it around and you get a trip computer, which tells you things such as how much boost the turbo is generating. Then as you charge along there’s a reasonable soundtrack from the exhausts, although it could do with being a bit more vocal.

We only spent a short time in the new Swift Sport, so keep an eye out for our full impression when it launches in a couple of months, but early indications are that it is still a great little package offering fun and practicality in equal measure.

Suzuki SA will also launch the new Vitara Turbo in SA later in 2019 , featuring the same basic engine as the Swift Sport although with 104kW and 220Nm of torque (compared to 86kW and 151Nm for the normally aspirated Vitara 1.6).

It also has the brand’s AllGrip part time all-wheel drive system, which can be left in auto or manually switched between loose surface settings or sport.

Again, we had an early impression with the vehicle but what stood out immediately was how composed it is. There was very little body roll even in the corners and the level of ride comfort was very good indeed. The combination of comfort and reasonable performance works well and given Suzuki’s current popularity in SA it could well be one to look at if you are in the market for an affordable small SUV.