Audi Q8 is a digital-themed decadence 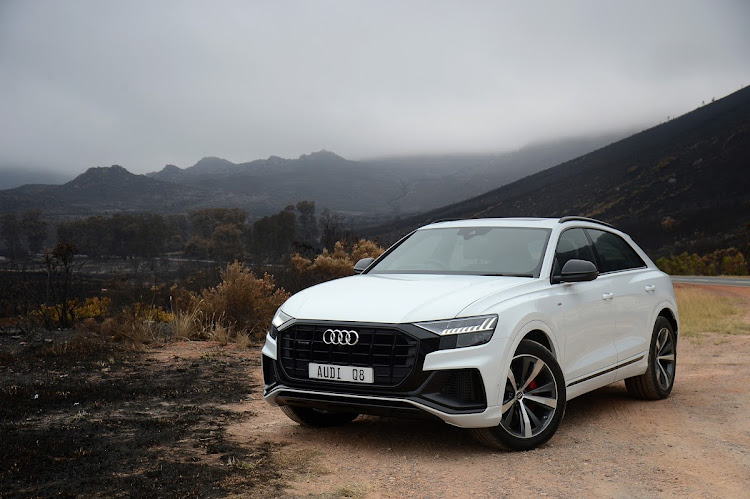 When Bob Dylan first plugged his guitar into an amplifier for a live performance back in the sixties, he was booed by sections of the audience. Anti-electric folk music purists were outraged at this “selling out” of his artistic integrity and acoustic soul.

The glass-half-full contingent were just happy that they could hear Bob better from the back seats. They realised, as Bob did, that technology doesn’t have to rob artistry of any of its … well, artistry.

Today we fully embrace the concept in our technology-rich age of smartphones and touch screens, and readily accept digital devices not just for their convenience, but for their stylish aesthetics too.

The interior of the new Audi Q8 is a fine example of technology and artistry intertwined — mostly successfully.

The digital-themed decadence includes a spaceship-like dashboard with a digital instrument panel and two large touchscreens in the centre of the dash: one for climate control and the other for the infotainment system.

This tablet-like interface is a thing of beauty indeed, if not necessarily a testament to practicality as grubby fingerprints tend to stand out because of the way the centre screens are angled, making some of the icons difficult to see in the sun’s reflection.

This digital interface has a tactile click in a bid to make it feel more like pressing real buttons, but I’m afraid it doesn’t work very well. The soft click is almost imperceptible; instead it’s just an annoyance having to press touchscreen icons harder than one’s used to.

A more successful example of technology-driven artistry in the Q8 is the charming light show it puts on. Andrew Lloyd Webber would be impressed by the way the headlights and tail-lights flash in a showy display when the vehicle is locked and unlocked.

And the way the interior ambient lighting displays the cabin “mood” by flashing red when the temperature is turned up, and blue when it’s turned down, is just plain cool.

Pressing the button to raise cabin temperature makes the ambient lighting glow red, and blue when the temperature is lowered.
Image: Denis Droppa

All this digital dapperness is wrapped inside one of the most striking bodies to come out of Audi’s skunkworks for some time.

Like BMW’s X6 and Mercedes-Benz’s GLE, the new Q8 adopts the SUVs-can-be-sexy theme. It is based on the Q7, but looks far less frumpy with its coupe-like roofline and slimmer derriere, its entirely more interesting front end, with an octagonal (instead of six-sided) single-frame grille, and some details that recall the geometric lines of the iconic Ur-Quattro rally car of the 1980s.

The Audi Q8 features laser LED Matrix headlamps as standard. These smart lights consist of an array of individually controlled LEDs that can turn off independently of one another, which allows you to drive permanently on high beam for maximum illumination of the road, without blinding other drivers.

Optionally, the car can be specced with night vision assist that uses an infrared camera to detect pedestrians and larger animals at greater distances than the naked eye, and marks them with a yellow frame in the instrument panel.

Like the Q7 it is based on, the Q8 is exceptionally roomy, with stretch-out legroom for five (not seven like the Q7), and all occupants are well catered for with comforts, including rear passengers getting their own climate controls. The boot is enormous and is accessed by an electrically powered tailgate.

It’s a heavy vehicle, and though it mostly masks this very well in regular-to-brisk driving, and the all-wheel drive makes it very grippy, pushing hard through a corner exposes some predictable body roll and understeer. Four-wheel steering is an extra-cost option that can be ordered to improve cornering agility.

Adaptive air suspension, as optionally fitted on our test vehicle, delivers the best of both worlds in terms of handling sharpness and ride quality. It also allows the ground clearance to be lifted to a rock-straddling 254mm for owners who wish to venture into the undergrowth.

We didn’t go rock clambering out of sympathy for the optional 22-inch low-profiles fitted (20-inchers are standard), but the Q8 did cover rough tar with impressive finesse.

There are various driving modes, from eco to sport, and in all of them the 3l petrol turbo vehicle felt endearingly lively. There is little lag as this big Audi hurriedly scoots off the line and delivers gutsy overtaking performance.

Fuel-saving mild hybrid technology allows the Q8 to coast for long phases with the engine deactivated, but our test vehicle still quaffed a thirsty 14.5l per 100km.

For now only the petrol 55 TFSI derivative is available, to be joined later by a diesel 45 TDI with 179kW and 500Nm.

For extra money the Q8 can be specced with driver-assist features such as lane-keeping and adaptive cruise control. However, for the R1,388,000 price it does come fairly well kitted out of the box.

Three S line packages are available to order, our test vehicle strutting the S line Black with its 22-inch wheels, adaptive air suspension, and black coloured details, such as the roof rails and external mirrors.

How many roads must an Audi drive down before you don’t call it an also-ran to a BMW or a Benz? Like Bob Dylan when he first plugged in his guitar, the styling of the Q8 will have its disciples and detractors. But I think Audi has nailed it.

It represents a refreshing new direction for a brand that was becoming rather homogenised and predictable in its designs. Audi is late to the SUV-coupé party, but its contender is a vehicle that charms and dazzles with its techno artistry. 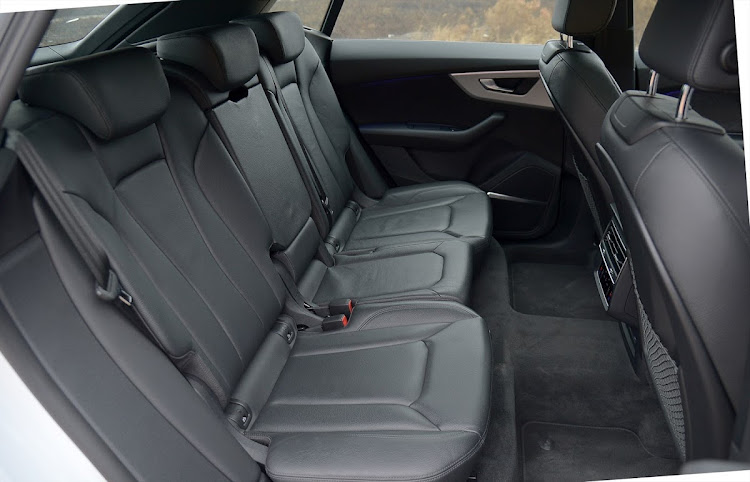