Visually and vocally, the supercharged Type-R is a real yeller. Picture: DENIS DROPPA

Its 2013 successor, the F-Type, carried over some of that mojo into the modern era. Its design, while not as revolutionary-for-its-time as its progenitor, nevertheless captured the original car’s spirit.

The double haunch styling line stretching across its flanks, for instance, recalled not only the E-Type but delved right back to the elegantly sporty Jaguar XK120 of 1948 for inspiration.

Seven years into the F-Type’s lifespan, Jaguar has given the car a major makeover to make it fit better into today’s styling zeitgeist.

Heritage is important to a "charisma" brand like Jaguar, so there is some controversy in the fact that the headlamps have been flattened into slim horizontal units, replacing the vertical lamps that more closely approximated the E-Type’s.

Jaguar’s design director Julian Thomson says they were flattened to exaggerate the F-Type’s visual width, a factor that is further enhanced by a redesigned clamshell bonnet, a slightly enlarged grille and a new bumper. The daytime running lights have a signature J shape to identify it as a member of the Jaguar family.

Matters of heritage aside, the new look gives the car a distinctly more hunkered-down and “planted” look, with more visual drama. Is it pretty? That’s an eye-of-the-beholder thing, but the car certainly looks more aggressive and purposeful.

At the rear there has been a more minor change, with the slim tail lights redesigned with an LED chicane signature inspired by the Jaguar I-Pace electric SUV.

Inside, the 2020 F-Type acquires a digital instrument panel as has become de rigueur in modern cars of a certain price. The old analogue instruments are replaced by a new 31cm high definition, personalisable virtual instrument cluster. It offers a choice of display themes, including a full navigation map, but to underline the car’s sporting nature the default mode displays a large central rev counter.

The seat belt guides and glovebox button have discreet "Jaguar Est. 1935" markings, signifying the year the Jaguar name was first used by company founder Sir William Lyons. Heritage is not in short supply.

There have been dynamic improvements too. The F-Type was the car that properly brought the marque into the modern sporting realms, and though there were other Jaguars, like the XK, that offered some athletic grand-touring entertainment, the F-Type boasted nimble, pinned-down handling that truly caught the attention of the most enthusiastic wheelsmen.

The one blight in its repertoire was steering that felt overly light, even though it was very direct and had the fastest steering ratio yet used in a Jaguar.

Jaguar’s fixed that by reconfiguring the electric power steering to have more of a "meaty" feel, an improvement I immediately felt when driving the twisty mountain roads near Porto, Portugal, where the F-Type’s international media launch was held. 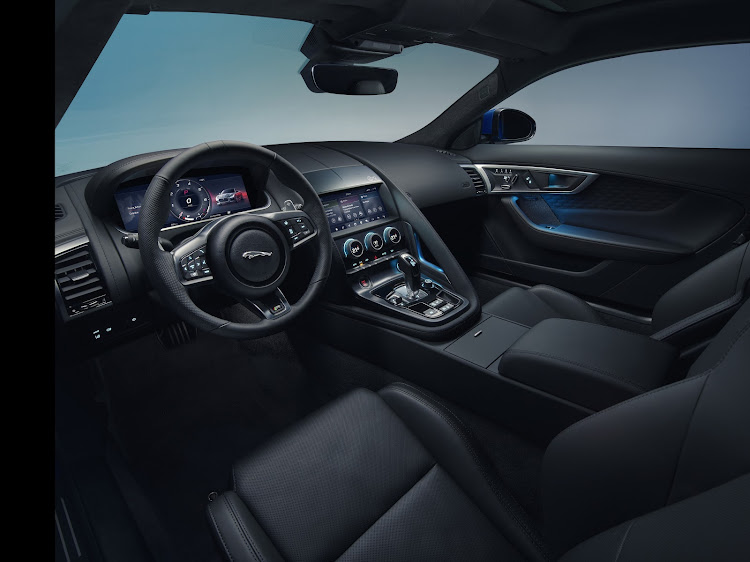 The 2020 F-Type acquires a digital instrument panel and other cabin updates. Picture: SUPPLIED

Along with the improved turning action, the car’s evolved into a better driver’s machine with an uprated chassis and double wishbone front and rear suspension that’s been tweaked with new springs and anti-roll bars. The F-Type’s more hunkered-down look is faithfully matched by the handling, which feels sharp and satisfyingly resistant to body roll when hustled through tight bends.

Perhaps the bigger surprise was this sports car’s ride quality, which wasn’t particularly firm or jarring. The variable damping has been recalibrated to improve both low-speed comfort and high-speed control, and the two-day, 600km road trip in Portugal confirmed the F-Pace is comfortably conducive to long spells in the saddle.

The range coming to SA later this year will comprise four versions, all of them available in both coupe and convertible form and with an eight-speed auto gearbox. The starting point is the P300 which is rear-wheel driven and powered by a 2.0l four-cylinder turbo with outputs of 221kW and 400Nm.

Next up is the 280kW/460Nm 3.0l V6 supercharged P380 version, available in rear-wheel-drive and all-wheel drive formats, neither of which were available to drive at the launch.

The range-topper is the P575 F-Type R which has a 5.0l supercharged V8 firing 423kW and 700Nm to both axles and scorches the 0-100km/h sprint in a claimed 3.7 seconds. The “P” nomenclature refers to the respective cars’ outputs in horsepower.

All engines feature active exhaust systems which raise and lower the volume at the press of a button. The supercharged V8 also gets a Quiet Start function if you don’t want to wake the neighbours.

As the entry point in the line-up, the P300 felt entertainingly lively. It won’t thrill hardcore power hounds but is satisfyingly eager throughout the rev range and its claimed 5.7 second 0-100km/h sprint is nothing to sniff at. As the lightest car in the range, it slices the curves with a convivially nimble nature and 2.0 engine sounds very throaty for a four-cylinder (aided by some sound enhancement through the speakers).

The F-Type R is an entirely more forceful beast, with chest-pressing acceleration that feels intense enough to make you want to laugh out loud. But for all that power it’s a relatively civilised beast, and the all-wheel drive and rear electronic active differential, together with stability control, kept it doggedly clinging the tar on rain-soaked Portuguese roads. Playing their part were the 265/35/ZR20 and 305/30/ZR20 Pirelli P Zero tyres are 10mm wider than before.

The roar is intense too, with a distinctive crackle and pop on the overrun that adds to the acoustic charm.

The new F-Type will arrive in SA around midyear in the following range:

Power, price and profligacy, all rolled in to a beautifully trimmed monster
Motoring
1 year ago

The best hatchback in the world just raised the bar again, writes Michael Taylor from the international launch
Motoring
1 year ago