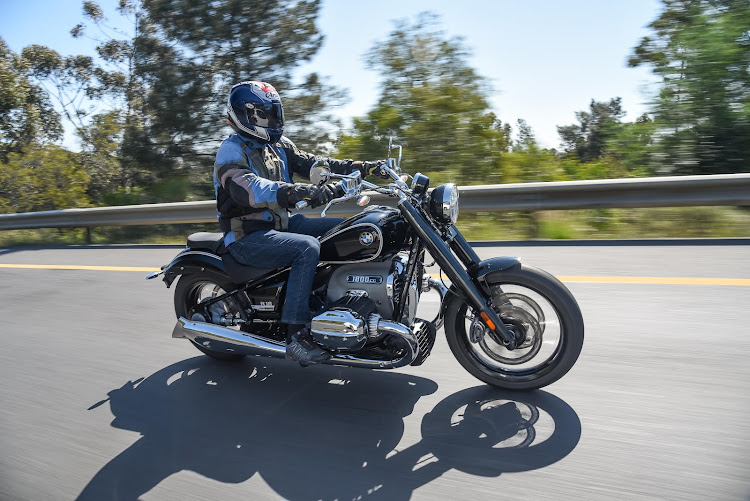 At 1,802cc this is the largest-capacity bike yet made by BMW. Picture: SUPPLIED

The new BMW R18 has cruised into SA as a bike with purist, no-frills technology and a thumping big engine.

This German alternative to Harley-Davidson is a retro-styled cruiser that harks back to BMW bike design of the 1930s, most notably the R5 with its teardrop-shaped petrol tank, exposed driveshaft and low-slung seating position. Like that World War 2 era Beemer, the new R18 has an air-cooled twin-cylinder horizontally opposed (boxer) engine but at 1,802cc it dwarfs the 500cc original.

It’s the largest-capacity bike engine yet made by the German firm. With its oversized duet of chromed cylinder heads poking out of the sides, this big and brash cruiser is one of the widest bikes on the road.

The basic R18 is priced at R319,900 but the examples we rode at the launch in the Western Cape last week were specced up to R364,000 with various add-ons. For now, you can have the bike in black only but it will shortly become available in additional hues.

Where BMW’s sports and adventure bikes are all about slick German efficiency, this Teutonic two-wheeler has a distinctly coarser, clunkier aura.

To start with you need to have your feet firmly planted as you fire up this big lump, as the bike shakes like a wet boerboel when those coffee-tin-sized cylinders awaken with a thumpety-thump idle. Twisting the throttle causes lateral torque that rocks the bike from side to side.

This is all part of the cruiser charm, though when you ride the R18 even the most dogged charisma seeker might be put off by the jackhammer-like engine vibration when it’s revved over 4,000rpm. Thankfully, this lump doesn’t need high revs with its maximum 158Nm of torque on call at just 3,000rpm. Leave it in this low-revving zone and this two-wheeled road ship sails along quite smoothly, though the gearshifts are clunky.

The bike’s performance doesn't quite slap you into tomorrow but it is pleasantly thrustful and vocally exuberant with a hoarse, low-revving throb. The rider can select three different riding modes — Rain, Rock and Roll — which affect the response of the throttle, stability control and engine drag torque control. Rock mode livens up the performance and makes this brawler feel more coarse — or charismatic, as the case may be.

Staying with the 1930s vibe the minimalist dashboard comprises an old-fashioned round analogue speedo. There’s a small digital display allowing you to flick through various functions, including fuel consumption and engine rpm, though there’s curiously no fuel gauge.

With an upright riding position and a wide seat the bike is fairly comfortable but with the full weight on your butt, with no load-sharing by your wrists, it may call for frequent coffee or selfie-snapping stops to prevent numb-bum syndrome. The low seat makes the R18 suitable for shorter riders but it’s a heavy bike and without its optional reverse gear (another item that operates in a very clunky/charismatic fashion) pushing the R18 out of parking spaces can be a strenuous exercise.

My ride through the Cape’s mountain passes revealed that this hulk handles better than expected thanks to its low centre of gravity. The limiting factor is the low height of the footpegs, which scrape the road if you attempt anything but the most modest lean angles.

Best to leave this big Beemer in a mostly upright riding position, where it finds its groove as you cruise along making lots of noise while checking out the scenery and smelling the fynbos.

The R18 will soon be joined by a more touring-orientated Classic model with a windscreen, saddle bags and cruise control.

PODCAST | The benefits of swapping four wheels for a motorcycle

In this episode of Cargumentative, Thomas Falkiner talks motorcycles with the national director at the Association of Motorcycle Importers & ...
Motoring
1 year ago

Join us as we take a look back at our motoring exploits from years gone by. This time, the calendar flips to February 26, 2017, when we staged yet ...
Motoring
1 year ago