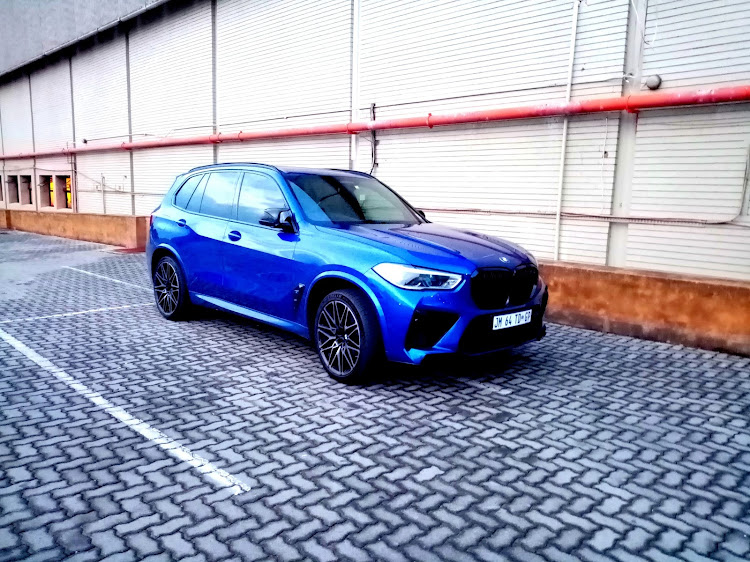 There’s no mistaking the 2021 X5 M Competition in the BMW line up.

The exaggerated gape and large pair of kidneys are made to scoop up copious amounts of air for cooling and stoking the volcanic 460kW and 750Nm made by a twin-turbocharged, 4.4l V8 that exhales a rowdy bass through a quartet of big bazookas.

There’s a very real and convincing aura of luxury inside the cabin, everything from the contoured seats, carbon surfaces and even how it steers in hushed tones when comfort mode is selected.

Tones of lavishness are a part of the deal, as is comprehensive connectivity and family friendliness thanks to a generous 2,972mm of wheelbase. The twin tailgates at the rear can be opened with a foot gesture to reveal a maximum 1,870l cargo area with the seats flattened.

Out in the urban jungle you do feel its 2,015mm girth. You’ll be conscious of where you thread its moon-sized wheels (21-inch standard and optionally 22-inch and black). It’ll squeeze into most parking bays but it’s a tight fit and it cruises fluidly with a lightness of touch that surprises for a sporting SUV. 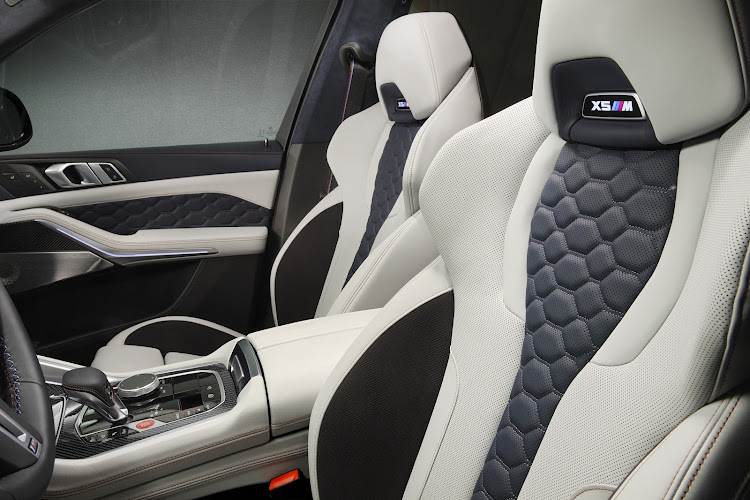 The sports seats are a functional and visual highlight. Picture: SUPPLIED

The reserves of power and strong brakes can be used effectively to avoid situations when waddling about in built up areas but let’s not fool ourselves, the X5 M Competition is about head-banging performance for reeling in the miles.

When you set the codes of mayhem to Sport+ for the engine, dampers and steering, it rifles off with scant regard for science. From standstill to 100km/h takes 3.8 seconds and it’ll only run out of steam at 290km/h.

The standard xDrive four-wheel drive system that’s fed by an eight-speed automatic transmission is the permanent variety and it’s not adjustable between 2WD and 4WD as found in both its M5 and M3/M4 Competition cousins.

BMW has enabled it to take turns effectively and safely through an M Sport differential helped by grip from its humongous rubber, but in the end it’s still a high-riding SUV and it should be treated with the respect and restraint as commanded by physics.

The package of technology, luxury and unearthly performance is persuasive in the face of rivals from Jaguar, Land Rover and Audi.

At a cost of R2,973,658 for the X5 M Competition First Edition, we should point out the extra R1.2m it demands over the price of the less rebellious X5 M50i V8, which is neither a slouch nor a poorly packaged thing.

You’d have to be really thirsty for 70kW more, arriving 0.5 seconds earlier to 100km/h or going 40km/h beyond 250km/h to justify that premium but, we know that the “wow” factor matters more in this sector and this X5 M has it in spades.

If the fastest and loudest X5 is what you seek then, yes, it’s the one. But if a BMW X5 is the primary target then there’s also a nice spread of diesels, petrols and a plug-in hybrid to choose from.

The new Opel Corsa quietly landed on dealership floors in the fourth quarter of last year.
Motoring
1 year ago

During this pandemic, we are all more virtually connected to each other than ever before. So why shouldn’t it be that way with your car?
Motoring
1 year ago

The F40 generation of the BMW 1-Series has taken some getting used to. To say that its appearance was met with mixed reviews would be diplomatic at ...
Motoring
1 year ago