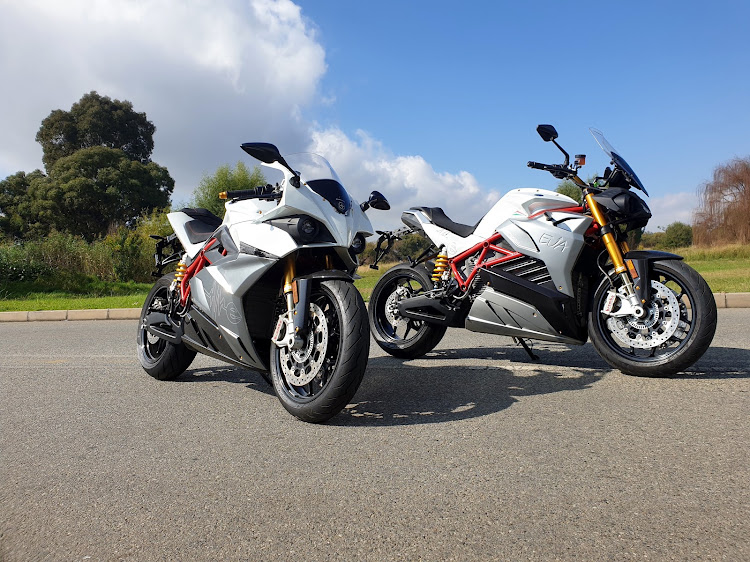 The future of motoring is electric, we are constantly reminded, and as more battery-powered cars hit the road, the trend is extending into the two-wheeled world.

Energica is an Italian firm that produces electric superbikes for the road and racing, and their high-end products are now available in SA from the local agent, Electronia.

There are three Energica models on offer from the Vanderbijlpark-based importer: the Eva EsseEsse9+ priced at R480,000, the Eva Ribelle streetfighter (R520,000), and the Ego+RS superbike (R550,000).

Those are eye-watering prices but Electronia’s CEO Kobus Janse van Rensburg is hoping to convince well-heeled motorcyclists of the benefits of going electric: breathtaking acceleration and emission-free operation.

“Energica bikes have 215Nm of torque, which is almost double that of a petrol-engined superbike. Once people test ride them, their eyes light up,” Janse van Rensburg says.

And he wasn’t exaggerating, as we discovered when taking test rides on the Eva and Ego. Both bikes have the same drivetrain but the Ego is a low-slung sports machine, while the more touring-orientated Eva has a more upright and comfortable riding position.

Yanking open the throttle in both these battery-powered two-wheelers produces the most astonishing thrust, in the same ballpark as petrol-powered superbikes. Though the electrically generated 107kW power output trails that of the average superbike’s 150kW-odd, it’s that mighty, instant torque that slings these Energicas forward as if they were fired from cannons. Or a claimed 0-100km/h sprint in an impressive 2.6 seconds, to be precise.

The oddest part of riding these battery-powered machines is the noises they make, or don’t. At standstill they are completely silent, garnering quizzical looks from fellow road users when stopped at intersections. But when on the move it’s anything but a soft-voiced experience as the electric motor loudly whines like a jet turbine, a fitting acoustic accompaniment to the explosive power.

Another break from motorcycle norm is the lack of clutch or gears to fiddle with; electric motors don’t need gearboxes as they produce maximum torque without needing to be revved. You just twist the throttle and experience a surge of step-free pace. Before you blink twice the speedo’s reading illicit numbers, with the Ego electronically limited to a 240km/h top speed and the Eva to 200km/h.

Keeping a check on this potent muscle are ABS-assisted Brembo brakes, traction control, as well as four rider-selectable modes — Standard, Eco, Wet, and Sport that offer differing levels of power. There are also four levels of engine braking control/battery regeneration.

The Energicas are similar in size to petrol-powered 1,000cc bikes but at 270kg they’re about 70kg heavier, so they don’t corner as nimbly or stop as fast. They have reverse gears to help guide them out of parking spots though.

Of course, riding at above-mentioned pace drains the battery quicker than you can say “range anxiety”. The demo units I tested were old-spec Energica bikes with smaller-capacity batteries, and delivered a limited range of about 70km in my mostly open-road ride — not nearly enough to cover a decent breakfast run.

However, electric-vehicle range improves greatly in urban stop-start riding due to battery regeneration whenever the throttle is released or the brakes are applied. The new 2021 model Energicas coming to SA have larger-capacity batteries and claim ranges of 180km on the open road, 400km in city riding, and a combined average of 230km — that’s if ridden at a normal pace instead of high-adrenaline exploits.

As for charging time, on a normal wall socket it took about four and a half hours to recharge the test bikes to full from 20%. They’re claimed to take about an hour to fully charge from empty on one of the public DC fast chargers located at a number of car dealers and shopping malls about the country.

Experiencing these breathlessly fast electrics was an eye opener, and their ability to deliver thrills akin to petrol superbikes is a good portent for a battery-powered future.

For now, their limited range (if you ride them as superbikes were designed to be) along with their expensive price tags, and charging times that take far longer than filling up with petrol, are still customer turn-offs. This will all need addressing before the market is jolted into buying electric motorcycles in big numbers.

There was a time when sports cars were made light and low for maximum handling benefit, but the rise of SUVs has led to some owners wanting their ...
Motoring
1 month ago

Wielding in-line six-cylinder engines, rear-wheel drive and athletic styling (for the era); there were no prizes for guessing which competitor the ...
Motoring
1 month ago

The new BMW M3 and M4 have landed in South Africa. We drove the pair in the Western Cape last week.
Motoring
1 month ago
Next Article